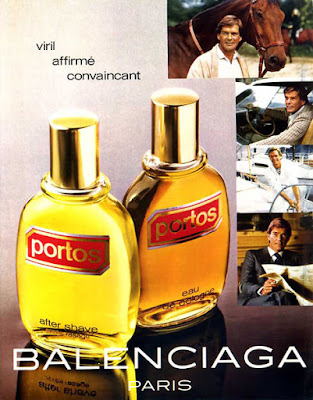 I have written, re-written, deleted, and started over this review so many times I've lost count. How can I be expected to describe a cologne that captures everything I ever wanted in a fragrance, and then throws in a healthy dose of leather and beaver glands-just because? I could describe the notes, but it wouldn't come close to evoking what Portos does on the body. If you were looking for a classic example of something that doesn't sound appealing on paper but is mind blowing in person, this is it.

Just look at the marketing in the advertisement above. Even in 1980 he'd have looked like a complete twat. I might be projecting because I grew up around people like that (Thanks, Highland Park!) but I know if I'd seen the ad before buying the bottle, I might not have. I guess it was just lucky that I blind bought it without any preconceptions.

Oh what a bottle of magic this is. There's leather, and then there's, Leather. This is the latter. The magic is how it starts off biker jacket and finishes Hermes handbag, or at least what I imagine an Hermes handbag smells like because they don't let people like me shove their noses inside expensive handbags. Maybe an Hermes handbag that carries around a pet beaver instead of one of those fashionable teacup Chihuahuas. Yeah, that's probably closer because as great as the leather notes in Portos are, there's no getting around the beaver in the room handbag. I appreciate that castoreum is divisive for both ethical and olfactory reasons, and perhaps that's what killed Portos as it is long discontinued*. More likely it was just too much of everything for most people. I'm not most people.

Portos was launched in 1980 but if you're expecting Kouros or similar, forget it. Portos would be better classed with the 1970s. Despite the heavy-hitting notes like leather, castoreum and patchouli, there's enough vetiver, carnation and cedar to keep it elegant. By the 80s that sort of finesse gave way to throwing everything in the lab at a perfume. Portos is intense in the first few minutes, but it settles in and becomes better behaved, though don't expect it to go anywhere. At a minimum this one is sticking around for 8 hours-days if you sprayed it on clothing. Sprayed it on synthetic material? You'll be smelling it through several washes. I have a vintage silky men's Dior dressing gown (bought it for Danny but he said he wouldn't be caught dead in it, so I kept it) that positively reeks in Portos now as it is my evening fragrance of choice. I'm guessing no amount of laundering will ever liberate it from the fibres and that seems appropriate.

A little goes a very long way, kids. I'm not kidding. Don't even think  of wearing this splashed on your palms and applied like an aftershave. Really, don't. If you think a teenaged boy over-applying Axe/Lynx is the worst possible thing you could endure, Portos can go from magical to maniacal in one drop too many. Treat it cautiously, and you'll be rewarded with one of the greatest fragrances ever created. I warned you.

I understand why Portos was marketed as a men's fragrance, but I do think today it is perfectly unisex, provided you're not a fan of sweet, fruity, candy floss fragrances. If you wear La Vie est Belle, Portos isn't going to be something you'll enjoy. If you like Bandit, Cabochard, or Azuree, it will be a better match. Again, apply it lightly the first time as it is hard to scrub off. What kind of man could wear Portos? Probably every single one except Hamptons Hal in the ad who would probably want something more expensive to impress people.

Notes according to Goody:
Studio 54, Expensive handbag, large dam-building rodent, and my rodeo-loving uncle (whose cowboy boots were always peeking out from under his judge's robes)- I'm pretty sure he didn't wear Portos, but could have.

As it is now discontinued and difficult to find, I would encourage you to get a decant before spending a small fortune on it as there's a good chance you might find it too strong. For me, Portos was instant love, and is easily one of a handful of fragrances I couldn't bear the thought of being without. I wish they'd bring it back, but I know it will never happen.

* Castoreum is used to scent tobacco, and is also found in artificial flavourings like vanillan and strawberry. It is often listed as, "Natural flavouring" for obvious reasons. We're all probably consuming beaver glands without knowing it. Makes drinking a coffee brewed from civet shit a lot less awful sounding. Well, maybe not.

"Hamptons Hal" HAH!
I have a distant relative who lives in the poolhouse of her Hamptons estate (she rents out the main house) somewhat "Grey Gardens" style. She keeps insisting we have some illustrious pedigree and has gifted me an annual subscription to "Town & Country" magazine since I was 18 yrs old. That annual birthday gift has NEVER arrived at my address here in Nepal.
Portos sounds amazing and while I'm not into leather scents - I do <3 me some castoreum!

thank you goody, for this fabulous review full of good humor!
portos seems a gorgeous perfume to me after reading your words - i´m not into sweet scents as well. and love it when i find vintage textiles in 2.hand shops that still have the smell of the old wordly opium or chanel nr.5.....or passing by an elegant granny who wears one this perfumes - obvisiously since half a century.
have to look up my dumas for character of portos.....
xxxxx

I don't know what I find more whimsical, the notion of a stern judge wearing cowboy boots beneath his robe, or a teenage boy dressed to the nines in a vintage Dior dressing gown. Danny was both wise and gracious to let you have it.

Note to self: do not ever refer to my husband's bathrobe as a "dressing gown" or he'll never touch it again, LOL. : )

Hamptons Hal looks like the rich jock who is the nemesis of the good guy in every 1980s movie made for teenagers. You'd be a better model for the ad any day, and I'm sure you also have the perfect vintage outfit to wear to the magazine shoot. If not the Dior dressing gown, then one of your beautiful '80s dresses loaded with equally beautiful accessories.

This sounds like an awesome scent and is yet another one I've never heard of. If I saw any for sale or if any were donated to my charity shop I'd snap it up. I love longevity in a perfume and this sounds like it has in spades! We had 5 new bottles of perfume donated today; one of which was Fendi, so I bought it! So far, I'm liking it.

Portos sounds delicious! I was ever the willing volunteer to clean the tack back in my college stable days, simply because I enjoyed sniffing the aroma of old, well-maintained leather.

Can't claim I've ever smelled a beaver, but I did have a (legally deodorized) pet skunk who wafted a wonderful musky scent, so I'll take your word for the desirability of castoreum in the blend.

And may we have a view of the Dior dressing gown, please? Sounds just the thing I'd be delighted to find in an odd corner of a thrift!

That sounds wonderful. Pete wears a lot of leather scents, tho the chances of me ever finding some of this are pretty much zero...

Kouros! I remember the sole hot teacher at my all-girls' grammar used to wear that!
I don't know the first thing about scents, just what I like and what I don't but this was a cracking - and hilarious - read! x

@Bibi
Town and Country is just what you need in Nepal...groans.

@Beate
Yes! It is like you get to know the previous owner by their fragrance.

@Emily
If it had been printed with a Cubs logo, he'd have worn it! My uncle was a character, I miss him.

@Ann
If you even happen on a bottle grab it! Even if you don't like it, you can sell it for good money.

@Veronica
Oooh, Fendi is a nice one! Smart of you to grab it.

@Beth
I will get a photo up shortly.
When I lived in Boston there was a skunk that lived on our street. He never sprayed anyone, and ate all the food left for outdoor cats.

@Mim
Sigh, I hate that I can't send you fragrances *grumbles about postal rules*

@Vix
Wearing Kouros into a classroom full of girls had to be deliberate ;)