Have We Got A Couple More Stations, or is This as Far as We All Go? 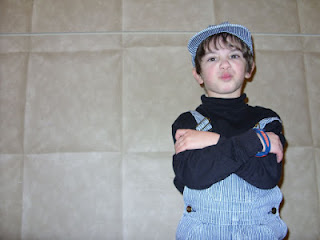 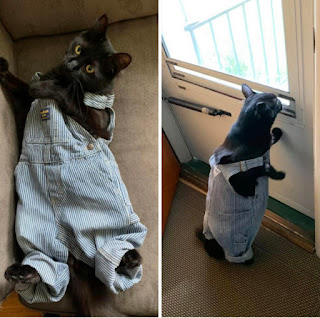 It isn't my fault people keep posting photographs of animals dressed like my child.
Guess who let me cut off his hair? 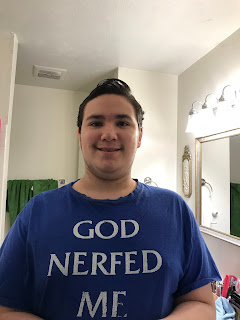 The beard is coming along nicely. I cut him sideburns as well. But no dungarees now, or he'll look like Big Boy 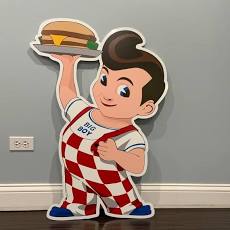 I'm just glad he likes it. His hair was halfway down his back, so this is a very big change.
In other news, it is snowing! The temperature is expected to plunge to 15 F (-9 C) and that means the Ayres Canadian wool blanket goes on the bed. We're expecting half a foot of snow, depending on drifting. 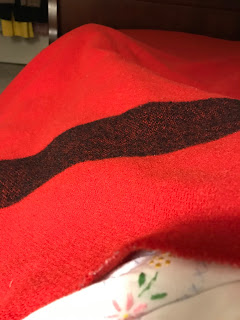 I live at the top of a very steep hill. An hour from now it will be impassable, and we'll watch car after car getting stuck halfway up. Every. Damn. Time. I wish I could put a sign at the bottom of the hill warning people. The city was out pre-treating the roads, but this started as sleet, and there's only so much salt brine can do. Fingers crossed the ice doesn't take out the power lines. 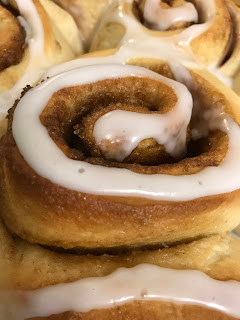 I made some exceptionally nice cinnamon buns this week. I tried replacing the cinnamon sugar with brown sugar and Ceylon cinnamon (it is a fruitier cinnamon than the regular stuff). It gives the buns a much deeper flavour, and I think from now on this will be my recipe. You'd think improving cinnamon buns would be impossible, but here we are. I made the dough with vegetable shortening and used margarine instead of butter, and honestly, I couldn't tell the difference. Maybe butter connoisseurs could tell, but to my unsophisticated palate, they were  perfect. Use a good vegan margarine though. I like Earth Balance buttery Sticks.
I have a few holiday posts in the works with recipes culled from 17 years of food blogging. I'll post them in installments over the next week or so. 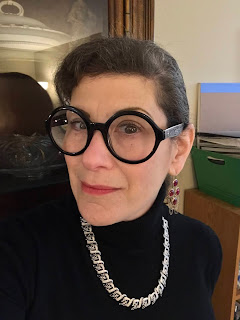 On the wardrobe front things are still...well, yeah. I guess I will need to unpack my snow boots now. Some under-appreciated jewelry is getting worn though, so that's always nice. 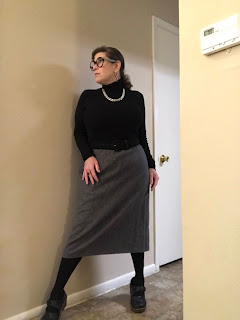 The grey wool skirt is vintage from the 70s. There's a matching jacket that I keep meaning to crop to a more wearable length, but haven't got round to it. Maybe a pandemic at-home winter will see it finally done. 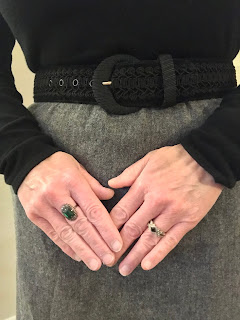 My favourite belt. Getting tighter, but that's ok.
Looking for some exciting clothing? 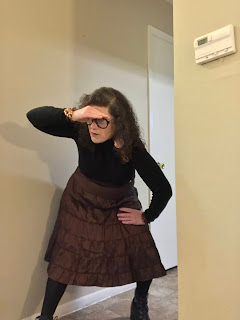 This metallic brown skirt that reminds me of a Quality Street is an autumn staple. 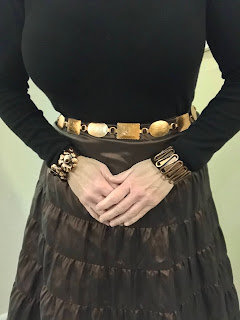 And it always looks so good with copper accessories. 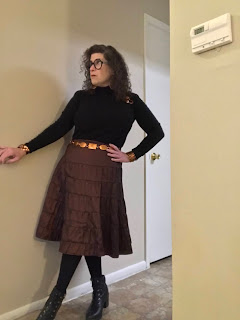 It took a long time for the brown/black combo to enter my wardrobe, but I think it works. In the past I've always worn the skirt with blue.
Now here's something different (no, not really). A vintage wool skirt with a vintage velvet jacket. Oooh, original. 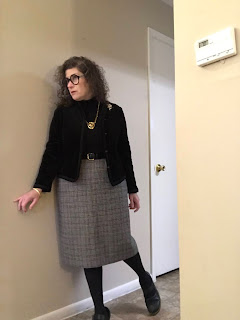 But the skirt is Pendleton. And the jacket is ACTIII. Primo vintage. 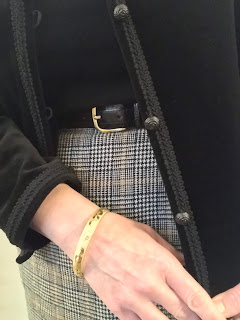 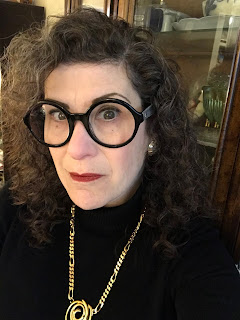 That's fair. Vintage Napier necklace though! I'm not sure it has ever been worn on the blog, so this was a perfect time to show it. It is as heavy as it looks. 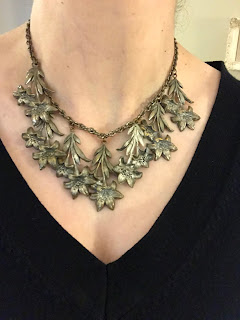 Speaking of big necklaces... this Edwardian one is quite light. 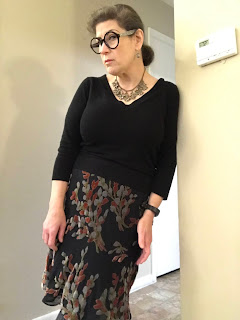 This skirt is really old. I bought it in London in 1999! The velvet on sheer fabric had a moment in the late 90s, but this skirt was one of the nicer pieces I had. Probably why I'm still wearing it. 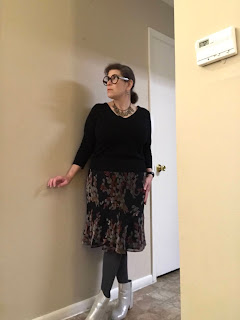 Styled it pretty much the same as I would have in the 90s.
Anyway, that's it for the exciting clothes. Here's a social distancing sign I liked...

Saw it online, not in Nebraska. Obviously. 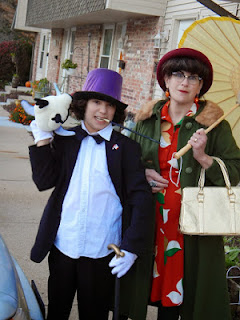 Anyone remember that Halloween we went as The Penguin and Lola Lasagna? 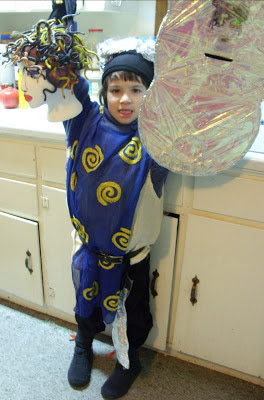 Or Perseus? Making that Medusa head was no easy task. I wish we'd kept it.
The year he wanted to be Uncle Pennybags from the Monopoly game...because what's scarier than a banker, right?! 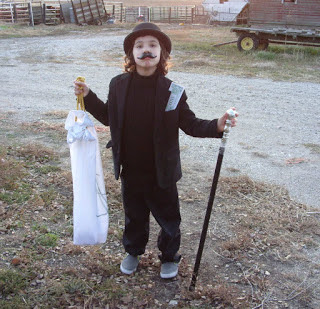 But my very favourite costume was when he was Frank the Combine from the Cars movie. 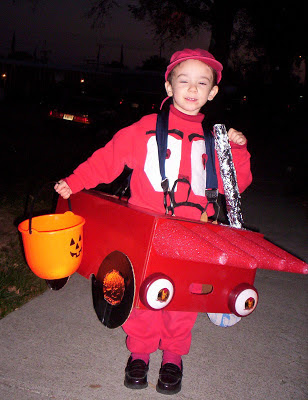 I sort of miss making the costumes.
If I don't blog before then, Have a happy Halloween.

Happy Halloween (or Blessed Samhain) to you & yours also!
Danny is looking quite dapper with his new 'do! Ugh, now I want a chef's salad from Bob's Big Boy restaurant with Roquefort dressing & a strawberry shake.
Ceylon cinnamon is magical in baking, love it with coffee & chocolate too for a Mexican twist.
I recall that burnout velvet from the 90s, loved it - had a shawl & jacket in similar material.
It's a balmy, breezy 83F here in Nepal and everything is closed for the high Hindu holiday of Dussehra. Going on week 2 of anosmia due to C19 (What a drag, JAMA says there's a 90% I get my sense of smell back in the next 2 weeks.)

Happy Halloween!
Lovely to see your hairstyling on Danny, he's looking so fab! (his t-shirt is also Fab! mwhaha). And I always enjoy a pic of a cat in dungarees!. ;DDD
Looking forward to read your récipes. I'm the odd one who never baked cinnamon rolls, but I'd give them a try if I can skip butter. You Are My Master Now, dear Goody!
Lovely wool skirts and autumn gear, and burned velvet!, I'm still a huge fan of this fabric. And love your jewellery, those copper pieces are stunning and the edwardian necklace is so beautiful, love it particularly!
Also lovely to see these costumes you made, so brilliant ideas!, the Perseus costume is a favourite!, the Medusa head looks amazing!.
besos

Wow, I really love that copper belt and Edwardian necklace!

You did a great job on Dan's hair. And how awesome is it that you thought to do a Greek mythology theme one year for Halloween? You are a very literary, very cool mom.

I'll be making cinnamon rolls in the coming weeks, as we have a nip in the air and a rustle of dry leaves. No snow, though. That just doesn't happen here in October. Part of me is jealous because I do love snow; on the other hand, it can't be much fun living on the top of a hill when the weather turns unexpectedly.

The floral design of the Edwardian necklace is an elegant echo of the of the skirt's velvet on sheer fabric, and the plunging V neckline of the top demands more than a simple pendant on a chain. But. Enquiring minds want to know (OK, I want to know) to what event you would have worn this ensemble in the 90s (including the space boots). French restaurant with a wine list? Reception at the Art Institute of Chicago?

The use of a drag queen as a measure of correct social distancing is something one does not see in Indianapolis, either. Again, an enquiring mind wants to know who created this innovative graphic design and in what venue it is displayed.

I wish you'd kept that Medusa head, too.

super cute helloween photos of little dan!
still love your black and black with muted color outfits - perfectly elegant. i had some of this velvet pattern on voile pieces too in the 90s - but did grow out of.......
the antique necklace is a stunner - i thing the flowers are "enzian" which puts it into alpine folk style.
hhhmmm cinnamon buns! a friend makes them - with lots of butter - an used to bring to our gatherings/parties - but now - no parties anymore.......
hope the weather is behaving at yours! xxxxx

@Bibi
Here's hoping you get some sleep-qand your taste and smell back soon!

@Senora Allnut
Danny has a collection of crazy tee shirts-that's his idea of dressed-up. I'm so glad I didn't give him a bad haircut. I haven't done his hair since he was about five. At least these days he'll sit still.

@Vix
I don't think your cats will put up with clothes :)
Danny is now going through all the styling products in the bathroom! I guess boys get to teenage years and suddenly start caring. Maybe there's someone on his Zoom calls for class he's trying to impress.

@Ann
Believe it or not, Danny asked me to cut his hair. His dad cut off his hair a couple months ago (after growing it for 10 years) and donated it to one of those groups that make wigs for children with cancer. I'm not planning to cut mine off just yet, but the longer this goes on, who knows?

@Emily
Danny went through a stage of really enjoying Classical studies. I had to hunt down an oddball Iliad translation for him when he was six because Larimore wasn't good enough... That head was easy enough to paint, but affixing several bags of plastic snakes to it was trickier!
I will say, reading Iliad and Odyssey aloud was probably the best thing we did homeschooling. For me as well. It took forever, but was so worth it because how many opportunities do you get to really dig into a text? Anyway, he was the cutest little Gorgon slayer.

@Beth
Ha! I remember getting dressed up to go to fancy hotel bars for cocktails in the 90s. Now I get dressed up to go grocery shopping. What a difference 25 years makes ;)
The drag queen sign was from a Gay-run thrift store in Virginia. I definitely want to visit if this pandemic ever ends.

@Beate
I love Alpine clothing. I have a few skirts with cute ribbon trim that need to be worn. Also, embroidered flowers on a chunky knit sweater always looks good.
There will be parties again! Not soon, but eventually.

@Bibi
Ha! I read anosmia as insomnia;)
I hope you get some sleep anyway!

Wow, Danny's haircut is a massive difference! I can't imagine him with a beard, he was so young when I started reading your blog.

Those cinnamon buns look fabulous. If you're expecting snow already, some nice buns will be a definite comfort. (I keep comfort eating; it's taking all my willpower to resist the Christmas shortbread...)

@Mim
That kid is so hairy, he's practically a Wookie. I'm afraid if he decides to start shaving he will be one of those guys that needs to shave twice a day.

My comfort eating has been peanuts in the shell. I really shouldn't but there's something so satisfying about cracking them open. I can eat an entire bag by myself. I've also been eating cereal straight from the box! Don't tell my mother :)