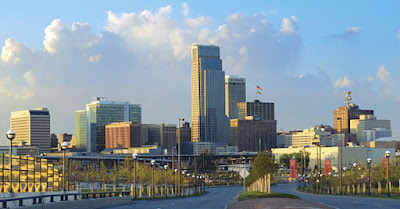 It is still too soon to know how the election will resolve, but I just want to express how very proud I am of Omaha. Nebraska is one of two states (Maine is the other) that split our electoral votes rather than the winner-take-all system elsewhere. Nebraska's second district came in for Biden. Most years that one electoral vote wouldn't be in play, but this year it might help. Anyway, well done Omaha!

Election day was largely quiet and uneventful. The few difficult (argumentative) people that didn't want to follow the rules were all from one family, and while I can't know exactly what their politics are as wearing campaign items is prohibited in a polling place, I'm guessing by the tee shirts reading, "I am an AMERICAN and firearms are my RELIGION" they probably weren't voting Democrat😀. But really, who knows?

Most people wore masks, but the way it was set up, I'll be amazed if I don't end up sick We did keep the doors open for ventilation (it was 75 degrees yesterday!) but social distancing was almost impossible with people needing to approach the desk to sign -in. . The respirator masks we were promised were Chinese knock-offs that I swear were cone coffee filters with a string. The face shields probably helped. I wore gloves, changed them frequently, washed and sanitised, etc. Hopefully it was enough.

We only had about 500 people in the twelve hours the polling place was open-and ours covered two precincts. Most people in Nebraska early voted (thank you!). We had a  poll watcher checking our handicapped accessibility, but that was it. No protesters, bad behaviour, etc. Of course what can come after the election remains to be seen, but I can tell you in my polling place anyway, the voting process went according to plan.

So now we wait. Regardless of the victory claims, of a certain would-be winner, there's votes to be counted. Meanwhile, I'll be isolating for five days (got my own bedroom and bathroom with everything I need) and then getting a covid test. Fingers crossed.

Fingers crossed you're ok and finger crossed the twat faced c**t is no longer the President.

@Vronni
He's been on twitter complaining that they're actually going to count people's votes. Imagine that?!
I had the strangest dreams last night, but I guess that's to be expected from the stress. I'm staying in bed today.

When looking at electoral college maps last night, I saw the red-and-blue striped zebra markings on Nebraska and I immediately thought of you! It's nice to see Nebraska getting positive attention for this.

Enjoy your well-deserved rest. I'm sure the face shields helped, even if the masks were flimsy.

To quote Jim Carrey as Joe Biden on the most recent episode of "Saturday Night Live," let's hope that on this Daylight Saving Time weekend, we will "gain an hour and lose a President." : )

@Emily
Thank you!
I was happy to see your state de-criminalised drugs. It seems so unfair to ruin people's lives over something that's already kicking them when down.

you are a heroine!
we all cross our fingers and paws for your health and for political change!!
much love! xxxxx

Bravo Nebraska!
Glad to see you did your civic duty (unlike me). And even happier few crazies showed up to vote or cause problems. Disappointed to see the "Blue Wave" predicted by the Democrat party & pollsters did not materialize but as long as the bastard gets voted out - YIPPEEE! I'm amazed how much interest this election is gaining worldwide- even here in Nepal & India. The Chinese knock-off respirator masks are crap (that is all we can get here) but the shields work great.

@Beate
I don't feel heroic, probably stupid ;)
I hope it was worth it because I really don't think this country has much of a future on this trajectory.

@Bibi
I swear, looking at his twitter is like listening to a six year old try to argue their way out of being grounded. He thinks he can sue his way out of it :(
I hope you're starting to feel better!

@Vix
Thank you. I guess we're seeing the actions of someone that's always been able to bully and sue his way out of situations freaking out when reality hits.

@Ann
I keep checking my temperature, and am getting as much sleep as possible to boost my immune system. I've spent the past two days in bed, which is probably for the best. Our American system was built around the expectation of decorum, and a sense of preserving the nation-I guess we're going to need some new laws after this, but we had a pretty good 200 year run before someone tried to game the system for their own advantage over the needs of the country.

Yep, the Chinese coffee-cone masks have appeared here, too. As one rather rough character commented when instructed to wear one in the store or else, "OK, there ain't enough to this thing to hurt anybody's religion." (He really did seem to have some difficulty in breathing.)
Relieved to see you're pleased with Omaha's report in general and your own election experience in particular. We live in hope!

@Beth
We just heard there was an outbreak at the election commission office in a neighbouring county. I'm guessing they had the same masks. They work in closer quarters and had much bigger crowds than we did because of early voting, so I guess it isn't shocking, but it is discouraging.