My Danny Dumpling Is Two And A Half 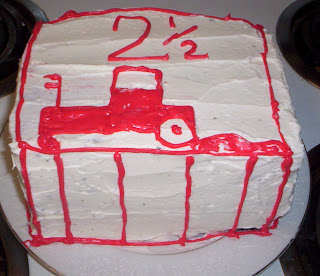 When I was a child, my mother would present me with half a cake on my "half" birthday. It was a cute thing she did that I always enjoyed. My yearly birthday cake would usually come from a bakery, but the half birthday cake was something she'd throw together and then freeze the other half. Honestly, I have no idea what happened to the other half-I suspect my dad would finish it off.

I always had a lemon cake for my half birthday (because I liked them), though in later years (once I started school) my mum would skip the cake thing substituting a frozen cupcake. I guess I ought to explain that. In Chicago in the late 1960's-early 1970's there was a company that sold frozen cupcakes. They came in a metal bottomed tin (like a Sara Lee cake) with a cardboard top and there were (I think) six to a package. For frozen cupcakes, they were really delicious and elaborately frosted. I remember there was a coconut topped one, a chocolate, strawberry and of course, lemon. Guess who got the lemon cupcake (I'll give you a hint-it wasn't my sister).

Rather than do the whole bake a cake, slice it in half routine, I decided to make a miniature cake for Danny's half birthday. I cut a 9x13 sheet cake in half and placed them atop one another. Yes, it IS lopsided, though the photograph seems to exaggerate it-the cake looked much better in person.

Do you have any idea how hard it is to draw a tractor in royal icing? No seriously-do you? You'd think living on a farm I'd be able to draw a better tractor.

I *loved* those frozen cupcakes and have been searching for them for *years*, or at least for someone who remembers them. I used to get them at my grandfather's place in Florida when I was a kid. On a whim tonight I started searching again online for a bit and came across your post. :)


Thanks for the cupcake nostalgia!

Awww, I'm glad to help. I've had difficulty finding anyone that remembered them also. Must have been an odd product that was only shipped to certain markets.

Thanks for visiting and saying hello.