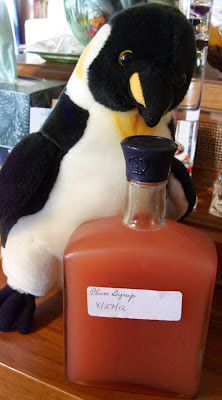 Relax, penguin. The alcohol burns off when you boil the syrup. We don't need to hide this from Floppy Ears the Bunny. Poor Floppy Ears. Last we saw of him he was sitting in front of the library with an empty Easter Basket and a sign that says, "I'll tell you something interesting for money." Thing is, he's a plush bunny-he doesn't know anything interesting.This syrup is interesting-it smells like bread. I think it will be much better with some wine in it... 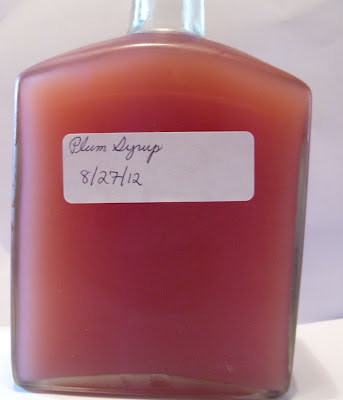 I had my eye on the Italian fruit syrup recipe in my old edition of Sunset Canning and preserving. With plenty of fresh plums to experiment with, I went ahead and made it. Today was the final step of adding sugar, lemon juice and water-it certainly looked better, but in the end, I have 5 1/2 cups of plum syrup that smells like bread-the yeast smell never boiled off. I don't know that it is expected to.

After it cools, I'll mix some with lemonita and let you know if it is like drinking a loaf of plum flavoured bread. Ginger beer always reminds me of bread, so perhaps it is just me and my yeast sensitivity (I get the weirdest throat thing after ingesting yeast which is why I avoid yeast risen bread, beer, etc. It isn't a gluten thing, and isn't really much more than unpleasant, but I've never run across anyone else that has it. Anyone out there?). I hope it will be worth the suffering otherwise I'm going to take the batch, run outside, and hurl it at the fence! OK, I probably won't run, let's be realistic.

The recipe is on line, HERE.