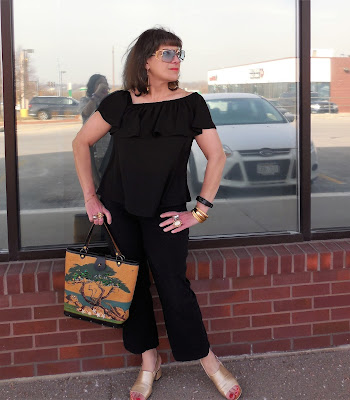 We were treated to some beautiful (if a bit windy) weather, so I seized the opportunity to wear these vintage sandals for the first time. This did require the varnishing of toenails in March, which is rather early for my tastes, but the overwhelming desire to wear new (to me) shoes got the job done. Don't look too closely-it isn't the neatest work. 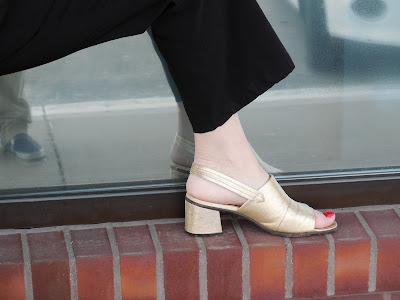 This outfit reminded me of the sort of thing my mum wore in the 60's/70's, 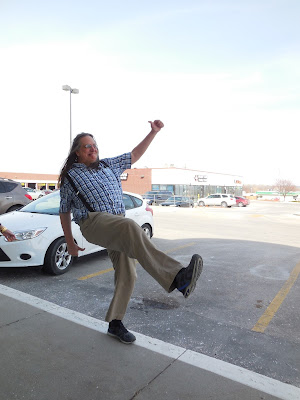 I have no idea who this person is. Keep on truckin'. 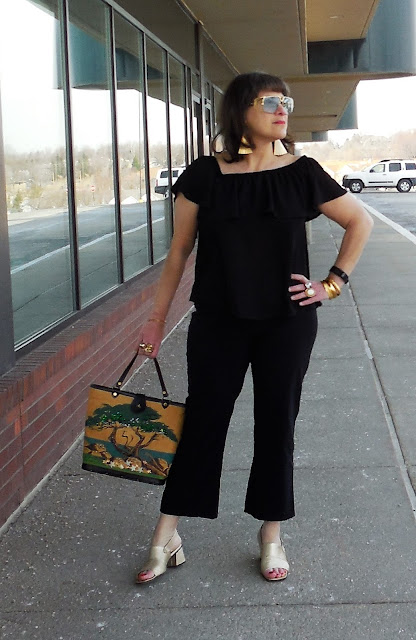 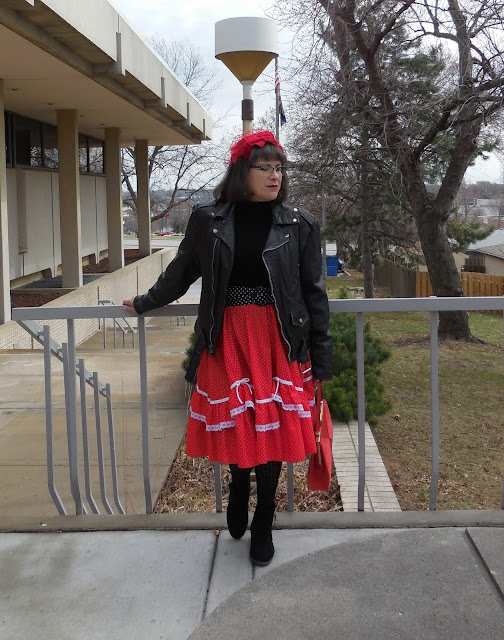 Earlier in the week I tried out this vintage square dancing skirt for the first time. 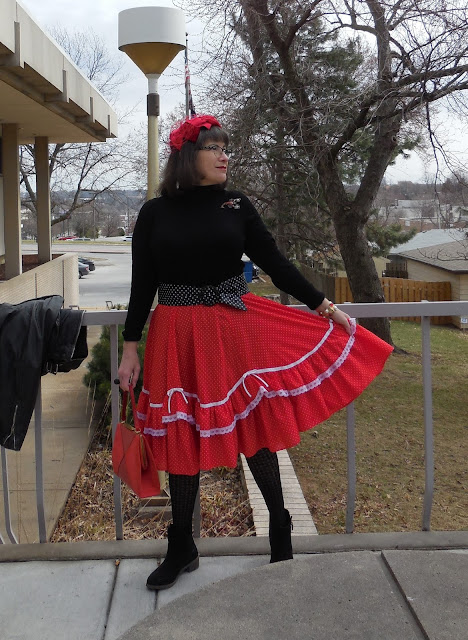 It was the hat that attracted the most comments. 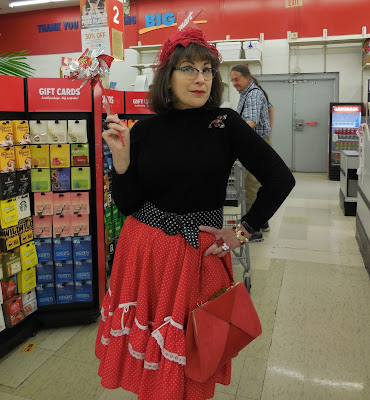 I called in to the K Mart to see if they had rechargeable batteries at a good price (they did) and I found some velvet boots in the clearance. I also located this magic wand/pinwheel that I simply waved about and the dude with the ponytail appeared to pay for it all. I love that! Like having a genii pop out of a lamp but without all that tiresome garbage of limiting your wishes to three.  I should try it out somewhere slightly more upscale than K Mart next time. 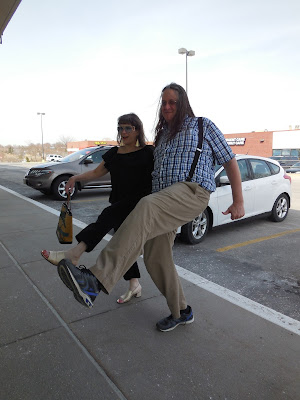 You look incredibly glam in your gold sandals and red toenail varnish! Fabulous bag and the earrings look gorgeous. March is extremely early for toe varnish - is it a record do you think?

Ponytail dude is clearly hanging around to buy stuff for hot mamas.

That square dancing outfit is ace - with the hat, it reminds me a little of Japanese Lolita styles, only grown-up. (Is a grown-up Lolita possible? Nolita?)

Backless & sleevless - that's all year round for me but sandals? It's got to be boiling hot before I'll get my boot off!
Loving both outfits and pony tail guy is a nifty mover. x

@Veronica
When I was a teenager I took a square dancing class-it was great fun.

@Mim
Well...my mum's name was Lolita! She always said she was happy that book was published after she finished school, or it would have been intolerable. She did jokingly get a pair of heart shaped sunnies at some point in the 70's. People would definitely do a double-take when she told them her name. My parents both had such strange names that it was a miracle we kids came out of it with Judith and Jenifer!

@Vix
Boots are seasonless-just ask all the cowboys.


Never mind all the vintage goodness (how could one wear that skirt and not be inclined to twirl?), I want to know where one finds a pony-tail guy like yours!

Quite right, of course, that ladies don't wear sandals sans polish; but never, ever have I heard of applying polish this early. My toes are still huddling in socks, and socks aren't worn with sandals -- unless they're proper Birkenstocks and that's only in Berkley.

We've had some gorgeous days but it's not quite sandal weather yet! I have some serious bag envy right now.

Hahaha! When I saw Mr. ETB in the first picture I thought he was pretending to perform a sobriety test walk as he seemed to be walking along the line, bwhahahaha!

My mom wore outfits like that in the late 60's-70's too. She usually word scads of long gold chains (those Italian sorts that were so fashionable in the 70s' and were available by the yard) with a Virginia Slim hanging out of her mouth. She had quite a few metallic sandals of that same style, I think they were Daniel Greens.
Love the square dancing skirt with the leather jacket, it's like the Ramones version of Minnie Pearl.
Ponytail man has been reading too many Zap Comix . I need one of those magic pinwheels, it looks easier than a credit card!

@Ann
Your Guy in a Hat takes you to better places than K Mart ;)
My feet spend so much time in trainers I'm happy enough to break out the sandals.

@Beth
Ponytail guy was a blind date 25 years ago. These days he's more of a deaf date.
Apparently socks and heels are a thing now, so why not sandals? *Mumbles* "I read it in the Guardian so it must be a real trend."

@Miss Magpie
I hope sandal weather arrives for you soon.

@Thrifty Parka
He does these things to make me laugh during photo shoots but now Danny is smart enough to turn the camera on him. there were worse ones I elected not to publish!

@Bibi
Ugh, the gold chain fad was so icky. Do you remember the charm holders to hang off the chain so you could dangle even more gold around your neck? I liked Mr. T but come on!

Ha! I should grow out the bangs to true Ramones length-that would be fun.

Love you in black, love you in the square dancing get up, but I love you most when you and the pony tailed dude ham it up for the benifit of us followers!!! May the good weather continue to get gooder!! Ok Better, but gooder sounds more fun!!

@Sue
Thank you. We are making sure Danny has funny stories to tell his children someday about his crazy parents.

My thoughts were exactly like Sue's. What a great pair! I am wondering about your father's name now...

@Radostin
His name was, Selwyn.

Really, I came out of it with a very normal name even if it wasn't a popular name until a few years later.