Thanks, I Hate It 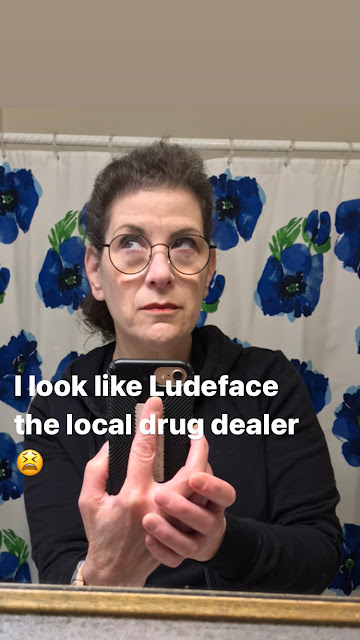 It doesn't look it in the photos, but these specs are much smaller than the ones I was wearing- they are on the large end of small. I don't like them, but I also don't like headaches and vertigo, so here we are. I'm going to need to start doing something with my eyebrows now! 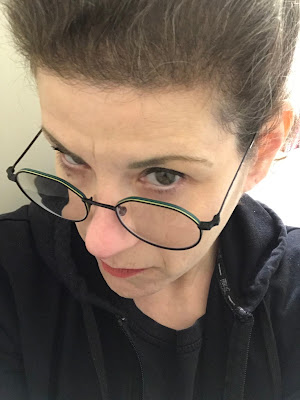 There's a bit of green and yellow on the trim, but that's only noticeable if you're standing above me-which at 5 feet tall is pretty much everyone. The frames are very, very light which for someone used to heavy/vintage frames is really nice. My lenses are on the heavy side, so it is nice to have something that won't leave dents in my nose. My last pair didn't have nosepads, but it has been a quick adjustment. I really hate the way they look, but the functionality is superb. I was able to get used to them quickly and I can't be sure it is from a couple days of wearing them, but my headaches do seem to be easing a bit. I had to drive to Iowa yesterday in the rain, and they were quite helpful. 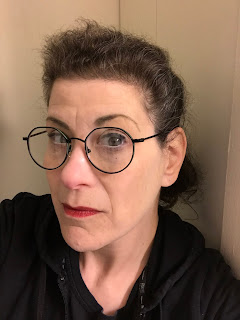 I just wish I didn't look like a guy! An ugly one at that. But hey, that's the menopause! My face thinned out, my hair grows on my chin instead of my head, and I'm getting jowls. On the positive side, I look like Ludeface the local drug dealer I can see a lot more than I did a few days ago. I'm willing to take the good with the bad. At a friend's suggestion, I called they eyeglass shop and asked if I can have them re-made in different frames because they make me look like Ludeface the local drug dealer I hate them, and they said yes. I'm going to give it a few more days though, because the Rx is working pretty well with these frames and I don't know that a different shaped lens would be as good. Knowing I can get them remade is a relief though-they were awfully expensive lenses (and I didn't even get the anti-scratch and anti-glare coatings). They are tri focals though, because I'm blind as a bat (though I can't hunt for food in the dark, that I'm aware of) 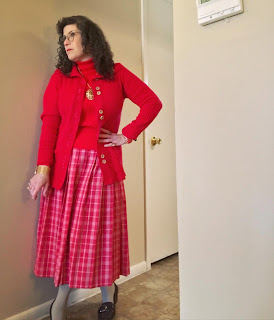 I was a little worried that once I could see better I might notice how shabby my clothes are getting, but thankfully that hasn't been the case. When I first went into strong glasses about age 40, I was shocked at what I hadn't been seeing. This has thankfully been a less dramatic change. I may be getting older, but my skin is in better condition than it has ever been thanks to copious amounts of hyaluronic acid, squalene, and retinol. I used being at home this past year as a chance to get serious with retinol (since no one could see me during the red-flaky stage) and it was a good decision. I look my age, which is fine. I was worried I might look much older. I do get the Senior Discount at the grocery store without being asked, but that's probably more my grey hair than wrinkles ( hopefully). I could well be delusional and fooling myself. I used to get mistaken for the older sister, which is bad as she was 10 years older than I was! She had exceptionally good genes (for appearance anyway)😀 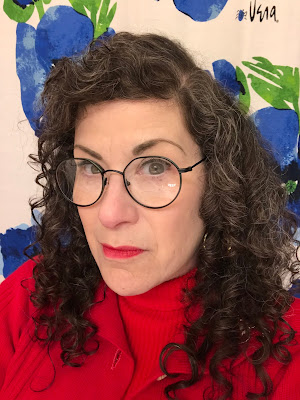 The glasses may lack interest but my hair has been doing some interesting tricks. A trim wouldn't hurt. I'm really looking forward to going to a hairdresser after being vaccinated. Meanwhile I bought some deep conditioners and masques and am making due. I did treat myself to a bath bomb that I'm certain was marketed to children, but it was pleasant and didn't have any strange ingredients to make me break out. A nice soak in the bath with a deep conditioner on my head is something I wouldn't ordinarially have time for, so I'm determined to enjoy it. 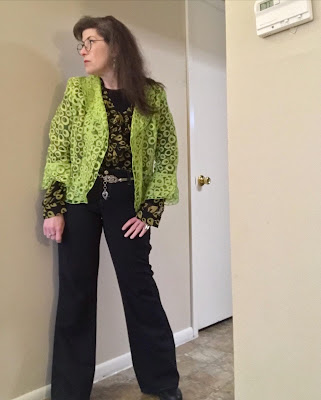 You'd better believe I wore green for St. Patrick's Day-I wasn't about to get pinched! 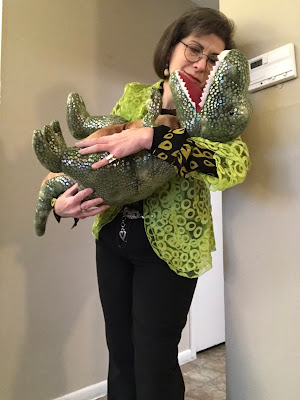 Speaking of green things, here's my baby dinosaur. It seems like just yesterday they were an egg.
I speak to Danny that way too. Not the egg part, of course, even though he was pretty much my last egg! He had his first dose of the Pfizer vaccine yesterday. He registered to get it in Council Bluffs, Iowa because Nebraska hasn't even set a schedule for vaccinating under 18s. He has co-morbidities, so it was important to get him a jab. He'd really like to be able to go back to in-person school even if it is for the last month of the year. I didn't register to get one in Iowa because my age group is up next in Nebraska, and it is less crucial for me to get one-I'm fine with waiting my turn. I did get called for Jury duty the first week of April, but they're keeping everyone distanced and using remote locations and video screens, so I'm not too concerned. I've never served on a jury, but I'd like to. I was disqualified in Chicago because I had an uncle who was a judge, then in Boston I was called a few times, but ended up not being needed. After 20 years in Nebraska, it was about time I got called to do my part. Anyway, I get paid $35.00 for my trouble which ought to just about cover parking downtown for a day. 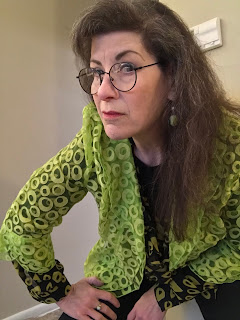 So that's about it for an update. Hopefully I'll get used to seeing myself in these frames and won't need to have them re-made, but it is good to know that's an option. Meanwhile, I'll keep doing the eye exercises and hoping for the best. Now that I can see up close again I feel like I ought to do some embroidery. Wouldn't want to waste this opportunity.
See ya (much better) later.
.

Yes, I don't like those roundish wireframes on you either. Maybe some smaller cateyes or a rectangular shape? I tend to prefer plastic or acetate frames because the wire get misshapen so easily and the nose pads bother me. Definitely need more of a statement frame rather than the bland unisex look.
That scarlet red is definitely your color! It makes your complexion ahd eyes bloom.
Glad to hear Danny got his jab!
xox Take care!

Totally understand that you'll need some time to get used to these new frames before deciding if you'll keep them, sometimes first impressions don't last!. It happened to me every time I changed my glasses, and my new computer/reading glasses still make me feel I'm back in the 80's (the bad side of them, actually).
Your hair and skin look both fab, so this is something to be proud about!. And you look stunning in red, I love this skirt and cardi-set!.
Baby dinosaur is the best accessory ever to your fab St.Patrick's Day Attire!, looking groovy!
besos

Your bathbomb was so mesmerizing to watch that I clicked on the video like three times. It was like watching the birth of pastel nebulae in outer space.

Your hair and skin look great. I got new glasses three weeks ago, and I am also going back in a few days to ask if they can be remade or adjusted somehow. The frames suit me nice, but they're my first pair of progressives and I can't read anything closer than arm's length because something wasn't calibrated correctly. I look forward to seeing what frames you pick out next time.

I loved the dinosaur photo. Too cute for words! And the black pants in the photo are great. They look comfortably loose, but they still have a nice silhouette. You could dance in them.

Congrats to Dan on getting his vaccine. Ha, if you still have his baby book, you can add a new entry for "baby's first COVID shot."

I've never served on a jury either, but my next date is in August and who knows, maybe they'll pick me from the pool.

I think the new glasses look fine. Now play fair and take a photo of you wearing them plus a giant happy smile! I bet you'd look terrific.

It is a terrible feeling when you do not like the look of yourself in your eye glass frames. It is so important to be confident and comfortable in something you put on your face every day. Actually, I think you look just fine in your new ones. Just not as dramatic. You didn't mention how hard it is to pick out eyeglass styles when you can only see with your glasses on. It is a real juggling act.

I have to share with the world here that I received my first Covid shot yesterday So happy !!! I won't get into the contortions I had to go through to get an appointment . But than you already know, you live in the USA.

I think the new glasses with the lighter frames are fab on you! They look so much more comfortable to wear too, being obviously lighter. Your skin is looking wonderful and I love how your hair has ringleted...

I'd give it a couple of days at least, who knows they might grow on you. Not literally, though :-) At least they are worth it if they magic away your headaches! Tri-focals can be really expensive, but I certainly don't regret the money I spent on mine. I'm actually blind as a bat too!
Both your hair and skin are looking great, and so does your red outfit, in spite of your misgivings.
Your photo with the dinosaur made me giggle, so that's good.
I'm also very pleased to hear Danny was able to get his first vaccine. There's no schedule for vaccinating under 18s here in Belgium either. Jos is in his early 70s, and he hasn't been called up yet. They're only doing the "regular" +85s here now :-( xxx

I really like the glasses! but if you aren't happy with them you aren't and that probably won't change...
Did you get to try on different frames? Your hair looks fab and thank goodness Danny got his jab, it does seem to be hit ans miss depending where you are.

Agreed that what you see through the lenses matters more than the shape of the frames -- but hopefully that aspect of your new glasses can also be adjusted to your satisfaction. You do have the Apfel-attitude to carry off the larger frames!

Good heavens, what a gorgeous bath bomb! Emily is right: it *does* resemble a pastel nebula exploding in space. But what did it sound like? And smell like?

It's good to know the headaches are easing.

You don't look like a man to me. Though I hear you on the facial hair front; I'd part with every item of makeup I own before my tweezers nowadays. (I wish there was a way to transplant it to my eyebrows; they've never grown.)

As for the looking older thing, you come across as very confident, so it could be maturity people were seeing rather than age. I don't think you look old enough for a seniors' discount.