Appendicitis-Zero Stars, Would Not Reccomend 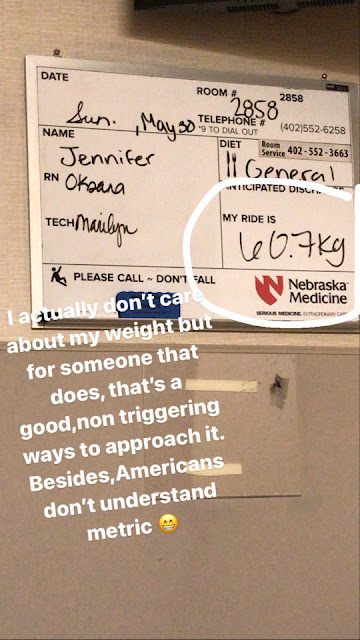 Just a quick note over here (already mentioned on Instagram and tumblr) I had an appendectomy Saturday afternoon after almost fifteen hours at the hospital waiting for a surgeon because, long holiday weekend=trauma injuries in Nebraska. I don't know why, but I suspect all that alcohol consumption drives the injuries and heart attacks. Anyway, they finally had someone free to do a quick laparoscopic procedure and now 24 hours later I'm resting at home. The hospital was awful and I essentially went without sleep for three days, but I'm fine. The worst part is the shoulder pain caused by the gas they have to shoot patients full of to do the procedure, but that should be okay in a day or two.

I am not the sort of person that will go to a hospital emergency room unless I'm at death's door, and Friday night I honestly thought I might be. I could have been if I'd waited as it was all rather acute by the time I was puking blood. So that was exciting! Anyway, there's things you can ignore but barfing blood is never a good sign.

The RN Oksana that took care of me Saturday and Sunday during the day was such a wonderful nurse I'm writing the hospital to tell them. I'm also thinking of sending her flowers because she was having an awful on-call shift over the long holiday weekend. For someone that genuinely loathes dealing with medical people, she made an awful situation bearable. I was very, very, lucky to be assigned a good nurse.

But I was lucky. When my gran had her acute appendicitis she ignored it for so long she ended up losing part of her colon. I was close. Listen to your body. I felt sick earlier in the day but pushed through with cooking dinner, doing laundry, and grocery shopping. It wasn't until I couldn't stop heaving that I finally accepted I was sick. You don't need to be dramatically ill to get medical care. I'm glad this didn't happen at the height of Covid when at one point we only had nine available hospital beds in town. Another good reason to get vaccinated if you want other acute illnesses treated. On the way to the hospital last evening to see me off to surgery, Dan passed a group of anti-vaccine protesters along the bridge by the medical centre. He gave them an appropriate one-finger salute.

Anyway, I'm feeling much better-at least until the bill arrives. I don't even want to think about that right now. Glad we didn't spend the stimulus money because that's basically my bailout appendectomy. I don't understand people that don't want socialised medicine. Obviously, they've never been sick.

I have three smallish scars and I will still be wearing my bikini this summer though it will be at least a month before I can use a pool. That's OK. I was joking that after they washed me with the iodine solution it made by skin bronze, then they used a sharpie pen to mark my stomach like a tattoo, and finally shaved me for surgery-it was like getting a spa treatment. Spray tan, pubic hair removal, tattoo=I'm ready for summer now. *Sarcastic voice*  "You don't need an appendix to have a fun summer!"

Right, so just checking in to let everyone know I'm doing well. I hope your long holiday weekend (if you're having one) is going better than mine. Take care.

Forgive me, just this once, for mentioning religion. You've been on my prayer list for a while now, today you moved up to second place, beneath an old friend who's fighting cancer but won't retire until his 40th anniversary as a cop next month. You've both led "interesting" lives and continue to thrive on smarts and guts -- but I'll keep praying.

#Beth
I've always gratefully accepted any prayers people want to send my way, so thank you. I really am fine now. I promise.

Oh Goody, I am sorry you had to go through that. definitely not a holiday experience.
I associate Memorial day weekend with disaster too, mostly just the automotive/boating accident aspect as I have had several family members, friends & acquaintances die or incur injuries that weekend. I have long made it a point to stock up on groceries and plan to stay home and garden every Memorial day.
Covid is ripping through Nepal, it has now reached the remote villages in the high mountains. About 8-10 helicopters a day buzz over my house transporting patients as there are no hospitals up there and the only way down to town is a very treacherous walk. Entire families are walking down to care to care for hospitalized family members. We are on full lockdown and police are enforcing it strictly.
Take care & glad to hear you are on the mend,
xox

oh goody!
poor thing! as i hate hospitals and most medical personal too - i totally understand your waiting to go and your not feeling comfortable there......
and i´m soooo very very happy that the surgery went smooth and you not lost a part of your colon!!!
take your time to recover - please!

for long holiday weekends - here the same: heartattacks from to much sun, fun sport injuries, car crashes.... and the mountain watch makes extra shifts. not to forget the wood fires lit by picknickers.

all my best wishes to you!! xxxxx

Holiday weekends are seriously overrated. Thank heavens you were treated just in time to avoid major complications. People like Oksana make hospitals a nicer place, that's for sure.

Please get some rest and resist the urge to do any fancy cooking and household chores. Find something fun to watch on your TV or computer, or read a good book--whatever you feel like doing, just do it and don't think for a moment that you don't deserve the time to yourself.

So glad to hear you got the operation you needed and had a wonderful nurse. I hope you heal rapidly and feel much better soon. My husband and I have had our first Astra Zenica vaccination and get our next in Late July - Australia has had a painfully slow vaccine rollout due to a number of (mostly political)issues but we are now finally ramping up, probably due in part to one of our States (Victoria) having a serious COVID-19 Breakout last week. Sending you my love and support. Hope your boys look after you.

Glad that everything went right and that you're recovering!. Also glad that your nurse was such a nice person, it makes a difference!.
Great advice on listening to our bodies and running to the hospital when necessary!. I'm a chicken and go to the emergency room/ doctor when anything goes remotely wrong, and this has prevented further damage many times.
And I totally agree with you, don't understand people that don't want socialised medicine (so stupid!). I'm grateful that we have a National Health System. Very Grateful, indeed.
Wish you a quick recover!
besos

Yikes!!!! So sorry you had to go through this on Memorial Day week end or at any time for that matter. Makes my rainy stay at home eventless holiday seem like a luxury. Please take care.

@Bibi
I'm so sorry things are bad in Nepal right now. I hope it eases up soon.

@Beate
It definitely was an inspiration to take care of myself and stay out of hospitals!

@Emily
I'm generally doing well, which a week after the surgery wasn't what I expected. Once I was home from the hospital, I started feeling better-amazing what recovering in the quiet of your own home can do.

@Ann
It is amazing how they can pretty much perform the surgery with three tiny incisions and pull the bloody thing out through the navel. The recovery time is shorter, and easier.

@Vronni
Your OH must be a strong and determined man to make it overnight with that-I was begging for morphine! I'm glad I only have one appendix because I wouldn't ever want to go through it again.

@Alli
That's wonderful news about the jabs (less wonderful about the outbreak). Here's to hopefully getting back to normal life for you soon.

@Vix
Fortunately the only thing I can't do is lift anything heavy, so they've been carrying things and watering the garden. Otherwise, I'm back to somewhat normal after only a week. I was very, very, lucky.

@Senoral Allnut
Listening to your body is a good thing to do. I have a tendency to ignore it but this would have been impossible to put off.

@Gail
I'm doing well! I have to think most hospitals aren't quite as terrible as this one for creature comforts, but they did get the surgery done, so what more can I ask for?

You were lucky and I am so very glad. Wishing you a quick recovery, thank goodness it did not happen a year ago.

Just catching up on blog posts so very late to the show but I'm glad they caught it before it got too serious and I hope by now you are well on the road to recovery. xx