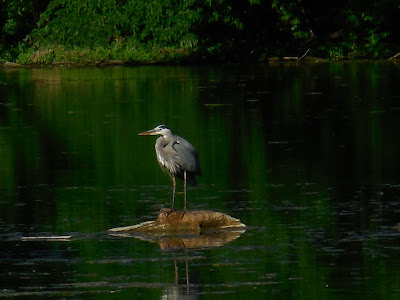 I spotted this Great Blue Heron at where else...Heron Haven. Strangely enough, this was the first time I've seen a heron there! It was such a beautiful evening, we decided to take a detour on the way to the market to have a short walk along the trails. I love this time of year when there's more hours of sunlight, but the evenings are still cool enough to enjoy a walk. 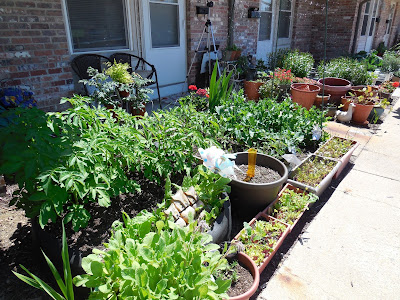 The garden is doing well. We had fresh strawberries for breakfast last weekend and it was a true delight. The first borage flowers bloomed and the bees are spending their days gathering pollen. Over the past few years the borage has blown through the neighbourhood re-seeding itself, and I was pleased to see people leaving it. The dianthus are happy as well. 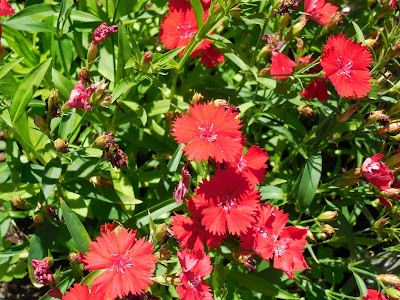 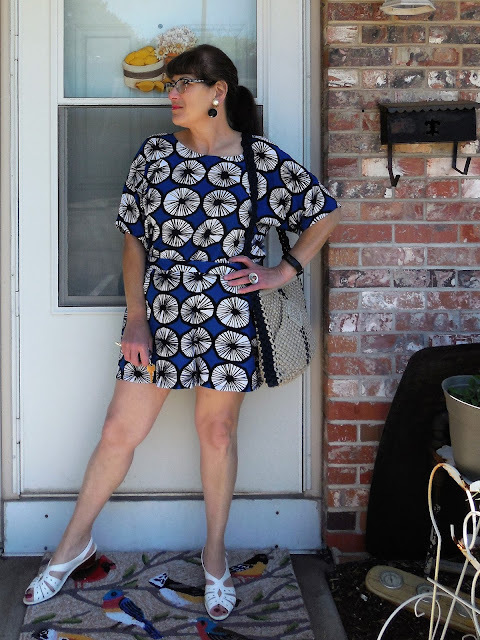 The summer wardrobe is getting worn. This Marimekko set isn't a playsuit, but rather shorts and a matching top I bought at Target last year during their designer collaboration. The pattern is supposed to look like orange slices. Very, very underripe orange slices! The macrame shoulderbag was made in Iowa in the 70's. I have several of these bags, and they've become indispensable summer bags for me. As a bonus, they're washable which makes them the perfect tote for days at the park. 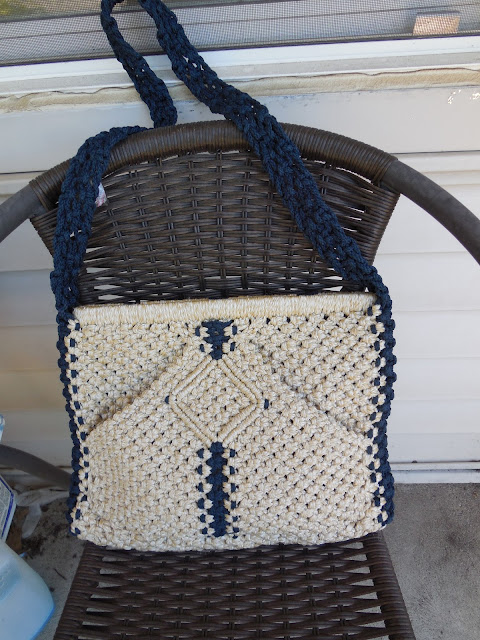 I've been busy perfecting my pie baking skills in time for the State Fair. Today, I baked a peach and nectarine pie, though in hindsight, a few raspberries would have been welcome. I'm keeping tasting notes from everyone I'm forcing pie on-so far no one is complaining they're sick of pie. The fair isn't until September, so I have plenty of time to practise. 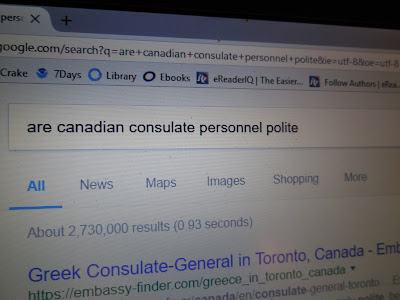 I spotted this over Mr. ETB's shoulder. He was supposed to be checking the local library website for a few Canadian titles I want to use for class next year-but he was obviously sidetracked. The internet didn't have an opinion, but cultural generalisations don't occur in a vacuum so yeah, they probably are polite. You can be characterised as worse things than polite-take it from an American 😁 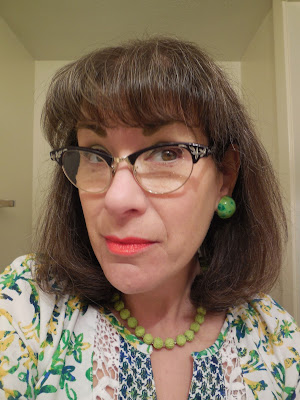 Okie dokie,. moving along then..,. 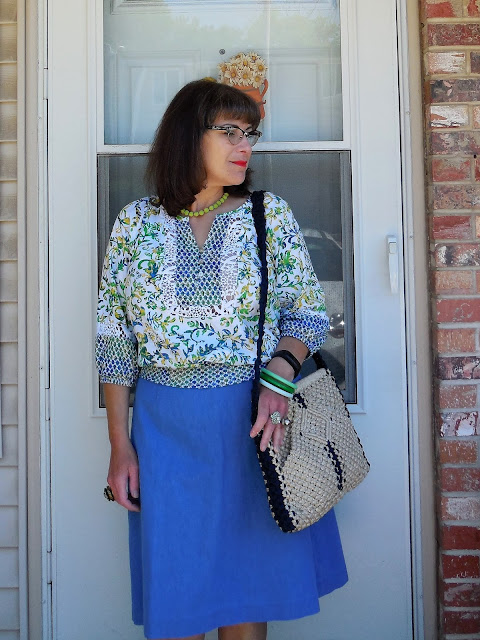 This top had an inaugural wear. I can't decide if I like it. The shoulders make my posture look worse than it already is, and the open lacework makes it challenging to find just the right bra. Maybe I'm lazy, but that just seems like more complicated than a summer blouse ought to be. I'll move it to the, "Maybe" pile and give it another wear before deciding, but I'm leaning towards, "Discard." 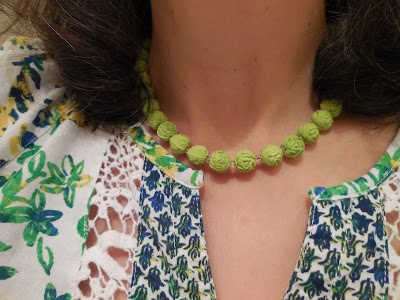 I'm keeping the celluloid necklace though-that was a lucky find. 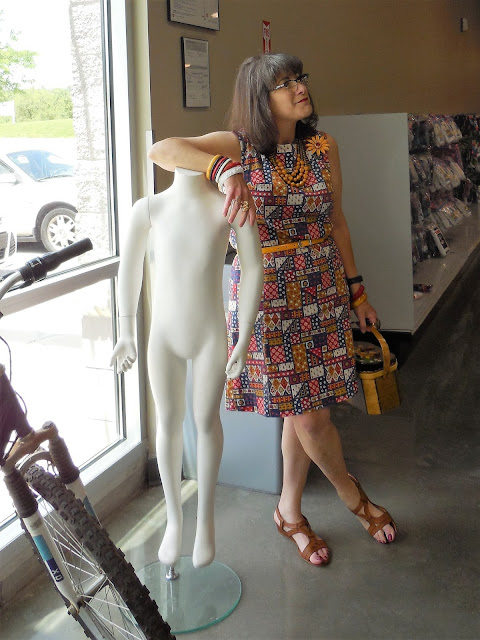 Thrifting is hard work! It was nice of the Goodwill to put these headless mannequins out to lean on. Prudish American that I am, I was tempted to put some clothes on it.  You can't just leave an undressed mannequin in the window-that's positively scandalous. We had a housekeeper that was very religious and would get upset if my dolls were unclothed. She didn't like posters where the eyes followed her around either, but she might have just been suspicious of Jimi Hendrix. Anyway, Goodwill, put some damn clothes on your mannequins before they catch their death from cold! 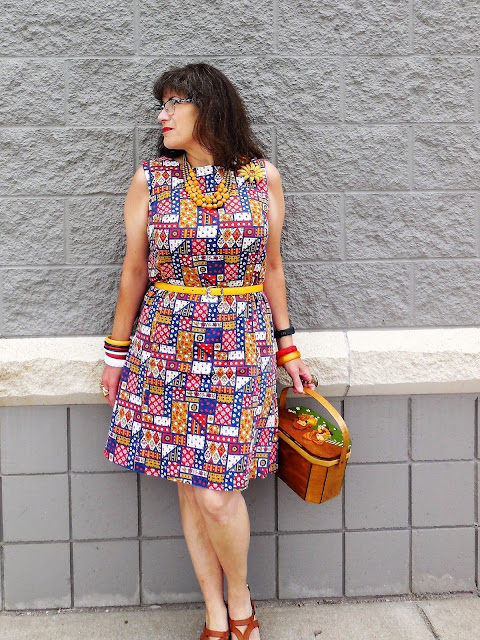 This is my, "Holly Hobbie" dress. I haven't worn it in nearly three years! The barkcloth fabric gets uncomfortably hot, so most years by the time I can wear a summer dress, it is already too warm. This year, the weather behaved and I hurried to unpack and wear the dress before it gets too hot. It will get too hot-Friday is expected to be 90 degrees F. The pool opened today though, so I know where I'll be! 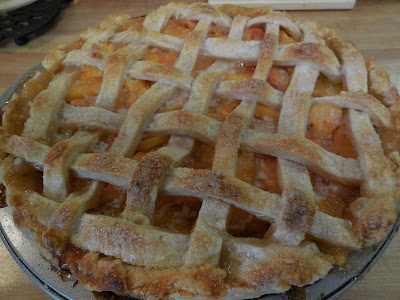 I'm off to replace my pastry cutter as you can't make a lattice crust without a fluted edge. I don't know where they keep disappearing to. Probably ran off with the odd socks.

I like you in the Holly Hobbie dress, it suits you well and looks so "happy"! JanF

The Mari Mekko outfit is so cute and you look fab in it. My favourite though is the Holly Hobby; it fits you beautifully and the colours and print are lovely - but what the heck is barkcloth? It sounds primitive and is it made from bark?

I love the beads with the Holly Hobby dress and the bangles, the sandals are rather fab.

The blouse is very unusual and I like it on you but I know what you mean about the bra strap thing - how about trying it with trousers and maybe a camisole underneath if its not too hot?

Your garden is beautiful!

I like the Marimekko outfit best but I'm a bold graphics person. The Marimekko print reminds me of dandelions rather than oranges.

The floral 'maybe' blouse- I don't think your shoulders look all that bad in it but the way the 'blouson' hits you seems odd. Looks like one of those blouse with too many ideas going on. They should have just made a thigh length kurti/tunic trimmed in lace & the blue contrast fabric to show off that gorgeous floral print IMHO. Geez, I am so Indianized, I want to make everything Indian!

WOW! What a beautiful pie! I'll bet it tastes just as wonderful!

That Hollie Hobbie dress is ace, I hope you're able to get more wear out of it before the weather turns too hot/cold.

I certainly wouldn't complain about being force-fed pie till September. I'd eat it purely for the good of your State Fair entries, of course. So selfless ;-)

The Goodwill ensemble is the best of today's post, Goody! Crisp, coordinated (but not matchy-match)and comfortable! This is what is worn by a woman who will fill her cart with treasures carrying the 50% off color tag!

The fluted pie crust cutter is hiding in the drawer under the 3rd best pizza cutter.

Oh I love the heron picture! There was one on the river walk here and it waited oh so patiently for me to get my camera from my bag, take it out of its case, switch it on and then with a graceful take off, it was away, I'm sure, mocking me!

Macramé always reminds me of my step dad who would make guitar straps out of it!

Peach and nectarine pie, yum! Two of my favourite summer fruits, right behind strawberries. We're just starting to see all the British grown summer fruits and salad appearing in the shops here.

I absolutely love your necklace, that's so pretty! And your Holly Hobbie dress is super! Holly made me feel better about my childhood frizz! This was back in the days before I discovered you could put something on curls to stop them being frizzy!

What a postful of treasures! I love your marimekko set, so very much more practical than a play suit and such a good print. The celluloid necklace is just beautiful, and I do like the blouse with it.l I agree with you that tops that are fussy about which bra one's wearing are annoying - but now you know, so it won't be so annoying henceforth. I like the coulrs heme, and have myself at times found I'm more satisfied with such blouses if I remove the bottom elastic. The final dress is fantastic and I love your flat brown sandals. As for the pie, yum!

Also, meant to say first that the heron picture is a really lovely photo, I enjoyed looking at it, thank you.

@Veronica
Bark cloth originally was made from the insides of stripped bark and was used in Hawaii for clothing. These days, the term means a coarse cotton fabric better suited to curtains and tablecloths. I do love the look of it as you can see the coarse weave, but it isn't as cool as something from the tropics would imply.

@Bibi
I think the blouse was trying to go Indian, and the it got lost in Forever 21! I'm not keeping it-the block printed part isn't special.

@Mim
If I could ship you pie, I'd do it. Of course you're always welcome here, but I'm not sure I'd put myself through traveling here! Can't blame the current situation either-it has always been a bureaucratic mess. American government gets lots of things right, but efficiency ain't one of them. We're good at other stuff.

@Beth
I only bought special undergarments for a dress once-a one-piece bra and girdle for my wedding dress. By the end of the night I thought my ribs were broken from being squeezed in that thing. I'm never subjecting myself to that again.

@Ann
I was so happy to see we'd both posted Heron photos-it makes the ocean between us seem smaller.

@Melanie
Hasn't it been revolutionary how the anti-frizz products have made doing your hair easier? I remember using giant rollers to get my hair straight, which lasted until I went outside in the humid Chicago summer air. We had a setting gel called (not making this up) "Dippity Do". It was flourescent green.

@Radostin
Danny took the heron photo on my cheap camera, so I must give him credit. He's the fashion photographer around here as well.

Summer clothes!!! Yay for you and your beautiful sunny weather, long may it last. And look at your garden, positively amazing. Strawberries for breakfast too!! There is nothing quite as satisfying as eating the produce from your garden, well done you!!

It really is a great picture - perfectly composed and wonderfully moody! My kids are my outfit photographers, too!