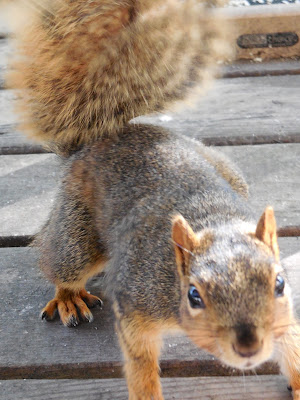 After plundering the bird feeder, this young squirrel decided to stride boldly up to the sliding glass door and peer inside. I'm sure he's watched Blondin being handed wholemeal biscuits, and eventually worked up the nerve to try begging on his own. I cracked the door expecting him to run, but very nearly had him run inside. This little fellow is fearless. He took his biscuit from my hand and scurried off only to return a bit later. I have a rather strict, "One per customer" policy with treats, but I wouldn't be shocked to find this one climbing the screen and knocking on the glass to get my attention. He got into a bit of a tussle with a red bellied woodpecker, but at least he came out of it still in possession of his tail. They learn quick that the birds are possessive of their feeders!

Today was strange, but in an overall pleasant way. I took Danny for a haircut, and the new hairdresser (his former moved away) looked at his oily hair that had just been washed earlier in the morning an announced: "Your hair is oily because your body is changing. When you're in puberty everything changes and you'll get pimples, and grow hair all over your body and hey, cheer up, you're becoming a man. But wash your hair twice because it needs it, okie dokie?"

I'd been after Mr. ETB to have "The Talk" with him, but now I think we'll just let the hairdresser do it-she seemed pretty comfortable with the subject.  I think she was younger than I am by a few years, but has teenage sons.

This sort of thing (not the puberty discussion specifically) happens to me quite a bit where people either over-share or feel so comfortable around me that they discuss things you wouldn't typically speak about with a stranger. I guess I don't come across as threatening which is good and bad. Mostly good-I like being generally approachable. 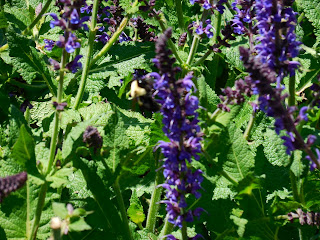 I might have gone a wee bit overboard (again) at the garden centre today. I came home with a rather exotic variety of coneflower that has beautiful green and pink flowers. How could I possibly resist? A few more varieties of salvia (purple and red), more celosia (orange and yellow), a King Kong Coleus (it is magnificent), and enough sweet woodruff to fill a bag bed on the back patio. It grows well in shade, and I'll use the flowers in salads and the leaves for winemaking. I also bought more Italian basil because...summer! I also purchased a pump sprayer that holds two gallons of water and is wonderful for cleaning up after birds (and squirrels) and washing windows. I would love a power sprayer, but there's no spigot for a hose at the back of the house and I don't want to run it from my washing machine hook-up. Knowing I can easily clean the sliding glass doors is terribly exciting to me. Yeah, that's kind of pathetic, but I'm my mother's daughter, so there.
I didn't buy this: 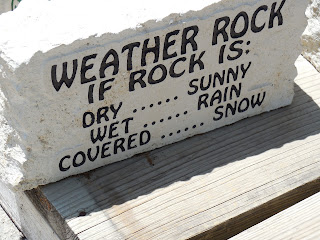 I can't decide if this is too twee for someone my age (or any age, really). 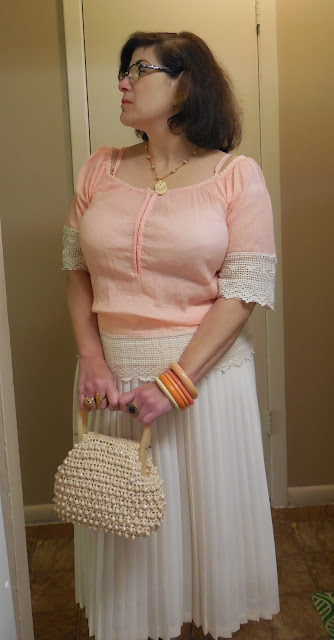 This top is meant to be worn off the shoulders. I did that for a bit, but I'm sensitive to sun and after a while I could feel my shoulders getting hot. I will say it is a flattering look if your arms aren't that great but your shoulders are. The straps are part of the top (not my bra) which don't do much holding it up, but I imagine are there more as part of the look. I took a chance on this top because it was .99 cents. I do end up dressing a bit more adventurously when it is practically free. 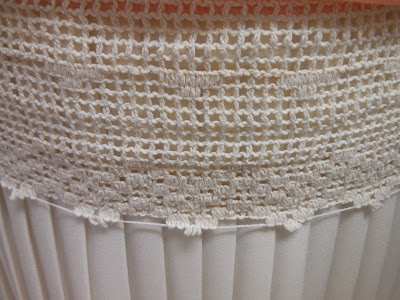 The crochet detail at the waistband and sleeves is quite nice. 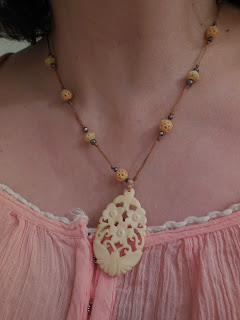 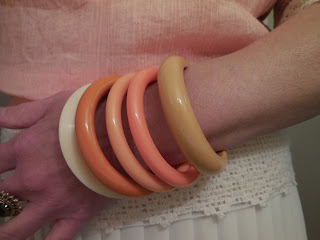 In other news-I bought Danny a budgie. Long time readers will know that I do not share my son's love of birds, and after living with a somewhat neurotic bird (well, he was a member of our family) as a child (it was my sister's) I developed a rather intense dislike of the feathered bastards. Forty years later I've made my peace with them, and though I swore up and down it wouldn't happen, we now have a bird. His name is Xerox (because he copies you, geddit?). Expect several photos once he adjusts to his new home. Danny figures Xerox is about two (by feather patterns, and the colour of his leg band from the budgie society) and they can live a very long time. In "Bird years" they're about the same age which means they can go through the awkward teenage years together. Perhaps I can get Danny's hairdresser to have "The Talk" with Xerox.

I have a hellish week ahead, so I'm off to grab the weekend by the balls and have some fun. Look, I'm all dressed to spray the windows and patio clean again! Don't say I don't know how to have a good time. 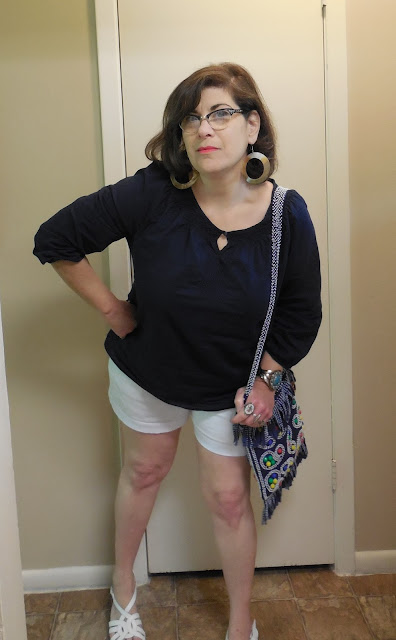 Have a great weekend!

No rodents of any sorts or pet birds (other than Mr Moriarty) at our house with 3 cats & a dog. The squirrels at Golden Gate park in SF are quite amiable too, they'll climb up your leg & grab whatever you are eating!

I had "The Talk" with our 19 yr old nephew who came to live with us from India 2 yrs ago to learn my husband's business. His feet, shoes & armpits stank so bad you couldn't even be in the same room with him. We're talking RIPE like gorgonzola cheese, a 2 day old corpse in tropical heat, and about 30kgs of cumin & fenugreek rolled into one. Poor kid had a face full of pimples & blackheads too. We took him shopping & tossed out all his old clothes & single pair of shoes. I had to laugh because he sprayed his new deodorant & cologne we bought him on the outside of his shirt. I had to explain to spray the deodorant & cologne ON HIS BODY not his clothes. Then I had to teach him how to do a proper wet shave. (This made my Muslim husband, nephew & in laws VERY uncomfortable - but hey SOMEBODY had to do it. ) Now nephew is pimple free, wears clean clothes
& underwear every day, takes 2 showers daily, has gained 10kgs, grew 3 inches taller, and you can sit in the same room with him without your eyes watering.

I want pics of the green & pink coneflowers!
Have a nice weekend y'all!

One day you will find an entire family, and I mean cousins, aunt and uncles etc sitting at the screen door!! I sure want a photo of that when it happens. So glad you have been to going overboard at the garden centre, the colour is making my dull place smile. Its all grey and yuk at the moment. Oh, has anyone told you that you total ROCK SHORTS!!!

@Bibi
If no one else was going to take on the responsibility of teaching a young man basic hygiene, then they shouldn't be uncomfortable with you doing it. Poor kid is lucky he ended up at your house. He'll thank you someday when he gets married.

As soon as the thing blooms, I'll get pictures-right now all I have is a photo on the tag to go by. It is supposed to have watermelon-like colouration.

@Sue
They probably pass down the information to their young, "Hey if you go over to that house the lady will give you a biscuit!"
Sometimes I worry that I'm over-doing the flowers for such a small space, but hopefully as one variety finishes another will bloom-at least that was how I tried to plan it. The gladiola stalks look healthy, but we shouldn't see any flowers until August or September.

Goody - we have a squirrel too and like your one he/she is fearless! He doesn't seem scared of the birds at all and hangs by one foot upside down on our bird table to get at the fat balls. He runs away when I come out - see, I'm the big squirrel scarer!

I love the outfit - you remind me (in the nicest possible way) of a peach ice cream) the top is lovely and goes so nicely with the skirt. Love those bangles and the bag is fab. It reminds of a bag I had in the 60s; it was made of plastic bead like things but had a similar handle.

I wish I could find an alternative way to clean my bird table - I have to scrub it with a scrubbing brush and disinfectant. We don't have an outside tap either.

Great news about Xerox - I look forward to seeing the photos soon. We grew up with budgies and canaries - my dad's...

Lovely plants for the garden. We're in Ely at the moment and have bought; rhubarb (yay!),larkspur, strawberries and more lavender all from a plant sale outside Ely Cathredal. The lavender was 10p a pot or 12 for £1.00 - bargain! I also bought a foxglove plant this week.

Hope the week ahead is not too manic,

@Veronica
The purse does have small plastic beads-I'll try to get a better photo for you.
Rhubarb is wonderful to grow. Once it is established you'll have more than you know what to do with, and your friends will all love you for sharing. Ours grew in the front yard just beneath the parlour window when I was a child. Chicago winters are terrible, and those first few bits pushing up through the earth in spring were a real cause for celebration, even if still somewhat snow covered. I wish you well with it. If the strawberries go well, you'll have the classic pie combination all spring. My strawberries are looking stunted, but I'm hoping they live long enough to produce a berry or two.

@Ann
Danny just sat there stunned. Kid today know all about "The facts" without being lectured by adults, but it was great watching how uncomfortable and embarrassed he was.

Delight lies in the details: the crochet edging with the bag, and the dainty ivory pendant make a charming assembly!

A budgie is an excellent "starter bird", according to my friend who rescues parrots, et al. Beware cockatoos, however. You'll love them, but you'll never (be allowed) to leave them.

@Vix
Once you discover all the varieties of coleus it becomes difficult to resist planting them all. I've seen some impressive arrangements of red and green varieties in larger landscapes. They do a good job of covering sparse patches and they're good in shade. I hope yours does well-they're typically a low-maintenance sort of plant.

I read that as "Seedy old men" at first glance!

@Beth
Ugh, my gran had a cockatoo-it was EVIL!That horrible screech of a call. *Shudder* Xerox did a bit of happy chattering this evening, and when the family sat down to dinner, he hopped down off his perch and started eating his food (his cage is just across the dining room). The boys said he did that earlier at lunch as well, so I guess it isn't a coincidence.