Orange You Glad I Mix Patterns? 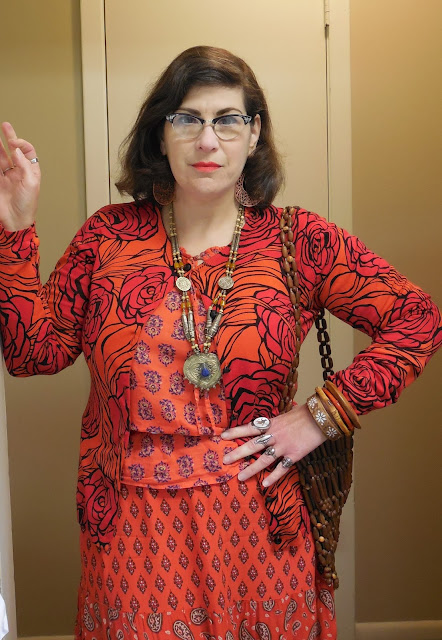 I want to thank everyone for their understanding with my previous post. I try my best to keep the outside world from intruding on my blog, but sometimes it does.

I spent several hours helping my eleven year old son sort through the crap in his room. I'm generally happy enough to ignore his room, but it was starting to smell like feet. To my relief, I located a number of dirty socks because I was momentarily concerned he might have a wedge of Stilton beneath the bed he'd forgotten. Have you ever gone through an eleven year old boy's room and tried to throw things out?
"I need that paper aeroplane. I made it in second grade."
It went on like that for several hours, but in the end we can now close the cupboard door, and come tomorrow he won't miss most if any of it. I have no doubt it will return to the same state eventually as kids are shit at throwing out paper, but for the next couple of months I can hopefully have an easier time hanging away his clean clothing without climbing over piles of Leggo, Matchbox cars, and comic books. 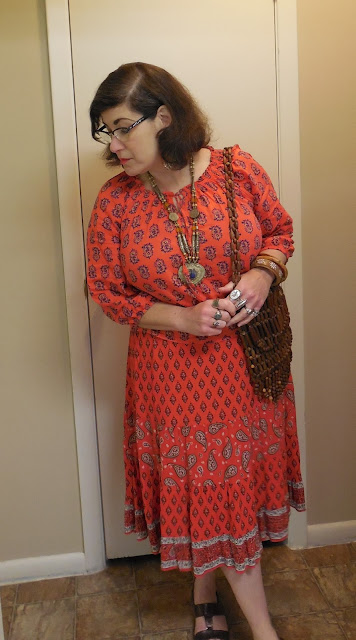 This top and skirt were not a set, in fact the blouse is something I bought at K Mart years ago, and the skirt is a rayon, Indian-made skirt from heaven only knows when. The addition of the silk cardigan in the top photo is probably too much but since when has that stopped me? 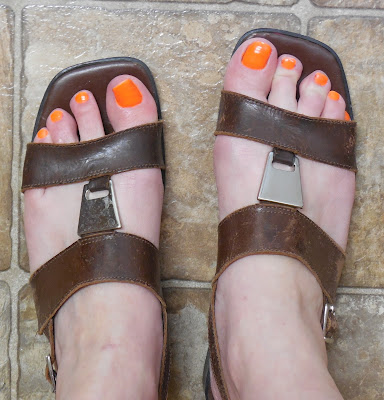 I've had these sandals so long I forgot where I bought them. A corner of the strap was thoughtfully chewed away by our late poodle, but that hasn't stopped me wearing them. I have a bit of a dilemma. I like to keep my toenails polished in summer, but my toes are almost always purple/blue from poor circulation. Red polish makes it look worse, and the purple I tried earlier in the week gave the impression I;d been embalmed. So far, orange has been the best colour I've tried, and as you can see, it still isn't great. Thoughts, anyone? 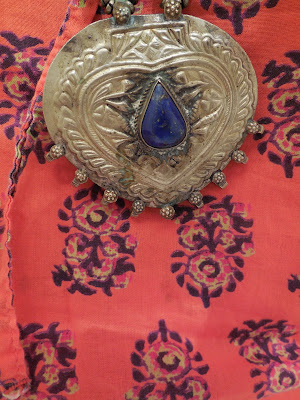 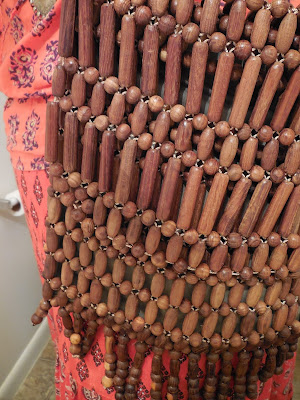 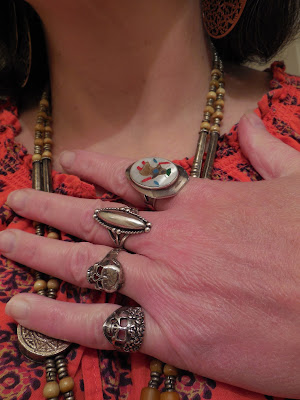 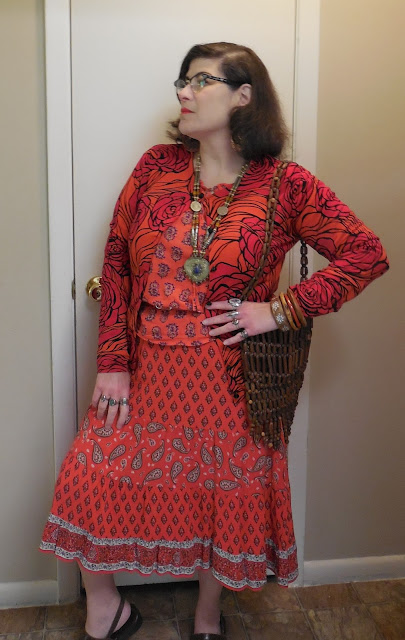 Xerox the budgie is doing well. I grated up some raw carrot for him tonight, but he seems reluctant to try it. Our dining room table is visible from where his cage sits in the room, and when we all sit down to eat he hops from his perch and begins eating as well. The first time it happened we joked that he was mimicking us, but after a few days we now know that he really is. We've had to keep him away from the window as he can see the birds at the feeder and starts to freak out. Understandable-grackles are big birds. We've discovered that Xerox does not like listening to NPR as he began to screech and continued to do so until I switched it off. I can relate, some days you're better off not listening to the news.

That's about it from here. Thanks to all of you again for being so understanding. I'm not easily pushed into reacting to boorish behaviour, but it happens.

I hope your week is treating you well.

My teenage daughter is into the nail decals. Multi colored patterned looks. Inexpensive versions can be found at local dollar stores. She insists the more expensive ones are easier to apply and stay on longer. She would though, because that's what teenage girls are about. If it costs more, surely it's superior.

At least with the nail decals you have an assortment of colors all at once. If you try it, let me know what you think!

Myself, I rarely bother with polish. Especially for my fingernails. My need for, digging in the dirt therapy of the garden keeps them a mess most of the time. Gloves only stay on for so long. The toenails are almost an after thought.

Coral is so your color. What a fortuitous find that top was to match your skirt! Beautiful patterns too.
Corals, peaches, salmon & orange should look good on me. I'm about the same coloring as you Goody but a bit warmer with chestnut brown hair (bleached to pale gold), green/hazel eyes. and a bit more of a yellow undertone in my complexion. Nope, anything with orange in it looks clownish or sickly.
I wear so many loud colors with my Indian wardrobe I usually just paint my toenails a early nude, shell, or beige.
Don't even get me started on boys' room & the stinky treasures hidden within. I find snack stashes in the weirdest places. Almonds in a shoebox ?
So Xerox likes to copy your behavior, eh?

I honestly thought the top and skirt were a set. They look great.

For nail varnish, peach or salmon might help - they'd warm things up a bit, and those colours always seem to suit the rest of you, so why not your feet as well?

The Games mags floor at work smells like a boy's bedroom. It's most disconcerting, as everyone there is adult, and they're not all men! Probably trainers left under desks, and lingering snack smells.

I love all that orange and the extra top made it extra yum! Oh how I remember the battles of a teenage boys bedroom and yes it did smell like feet. I had two boys remember so had to go through the crap twice. Boys?? I sometimes just used to close their bedroom doors.

@Janice
I hadn't thought of decals-that sounds like a great idea!

@Bibi
Almonds in a shoebox is strange, I'll give you that!

@Vix
I like your blue nail varnish.
It was so strange finding that skirt-the Universe wants me to have all these matching clothes. How else to explain it?


@Mim
You're right, it probably is the shoes (I'll have to give them a dusting of talc when he's not looking). By the way, I like your new profile photo.

@Sue
Your boys grew up to do their own laundry-maybe there's hope for Danny!

You are the acknowledged Mistress of Pattern Matching, especially in the citrus shades of tangerine and orange. I confess my mani-pedi polish choice is usually a boring clear, simply because I shun the sun lest I scorch and white legs look dead with bright polish. Have you considered Opi's pearly whites?

Febreze is the answer to odd stinks in my household.

Love the outfit and the colour is lovely on you. I really like the orange nail polish but how about green? I know you like green!

I am having a feeling of deja vue as I type this comment. I'm sure I have already said this before but there is no comment of mine on this post - is bloody Google at it again, I wonder?

@Beth
I forgot about those pearly OPI polishes. I wore them on my hands years ago when I still bothered. Thanks for the reminder.

Febreeze is good stuff from what I hear. I confess to using Guerlain Aqua Allegoria Lavendre Velours when I change the sheets and to freshen rooms. I bought a massive bottle of it about ten years ago but it was too much on my person. Turns out, it makes a great (albeit expensive) air freshener. The scent lasts about a week on linen. The only compliment my MIL ever gave me was that the sheets always smelled so nice when she stayed at our house. She'd have pissed herself if she knew I was dousing the sheets in Guerlain!

@Ann
Perhaps I ought to be compiling photos as well. I feel sorry for the person that he ends up living with someday-with any luck, they'll be anosmic.

@Veronica
Green is a good idea. Thank you.
I have no idea what is going on with Blogger. I checked the spam folder and didn't see anything there but strangely, I feel like I saw it earlier as well!

Ha! I might not be far off losing a toe or two, so I'd better stay away from black.