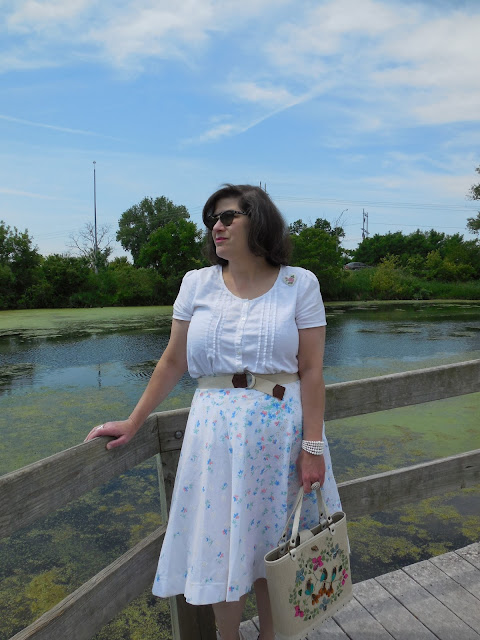 Have you ever seen a dragonfly swarm? Years ago, we had a cloud of dragonflies that spanned several miles as they made their way past the farm out to the wetlands. Yesterday, at Heron Haven it wasn't quite a swarm, but there were thousands of them darting about over the water. They're mating now, and sometimes you can see them fly past still engaged. Don't worry, I covered Danny's eyes with my hand and told him not to look!

We've been spending as much time as possible outdoors, away from internet, and television, and a budgie that delights in screaming for hours at a time. Oh, sometimes he stops screaming long enough to eat, but how long does it take to eat a handful of millet? I'm not sure what's worse, the budgie or the 24 hour news cycle.

I've found a few nice things recently in the thrifts. I had this skirt in all-white years ago, and I loved it but eventually the flowers turned yellow (they are painted on with some sort of raised acrylic that almost feels like rubber) and I had to discard it. I'm going to take extra careful care of this one (hand wash and air dry only) as I'm so happy to be reunited with it. I like the colourful version even better than my previous one. There's nothing particularly fancy about the skirt, but it did get compliments from strangers for looking, "Cool and pretty" which it is. I really should have worn a slip with it as the material is tissue thin, but I couldn't bear the thought of another layer. 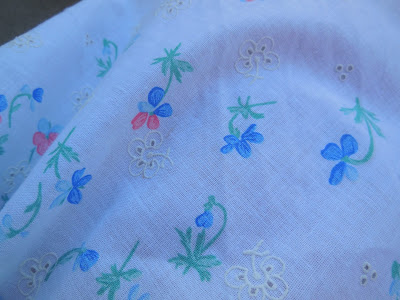 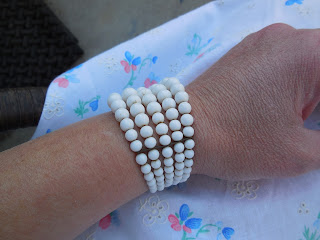 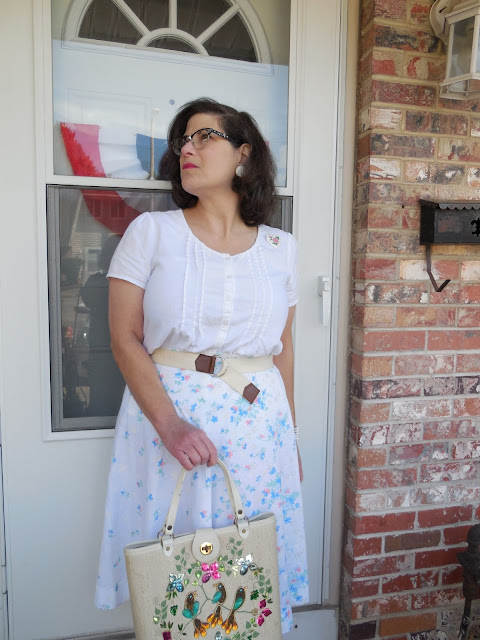 Today, I once again found myself fleeing the house and instead of the nature sanctuary, I ended up at the art store. That place is dangerous for my pocketbook! I rationalise it by reminding myself I am now the art teacher, and I can't be expected to teach without the proper classroom supplies (it is mostly art history but, shhhhhhh). I do get a teacher's discount there, which I'm grateful for. I purchased a very old straw hat (I think it is 30's or early 40's) but some of the straw is shedding. I didn't want to re-block the whole thing, but I also didn't want to use modge podge or a heavy lacquer on it. I finally found a fabric glue that I figured can be thinly applied inside the hat without much damage or flaking off. I'll let you know how it goes. If anyone has a better idea, I'm eager to hear it. The hat was very inexpensive, so I won't be devastated if I ruin it, but I'd rather fix it, obviously.

I might have left the shop with more than a tube of fabric glue, but shhhhhh. That's our secret. When I was a child I would spend my lunch money on art supplies from the school store-coloured pencils, sketchbooks, watercolours-that sort of thing. I was finally caught out when the teacher called my mum to ask why I never had lunch or any money. I caught hell for it, but oh the smell of a new box of crayons! I'm still that seven year old when I walk into an art supply store. 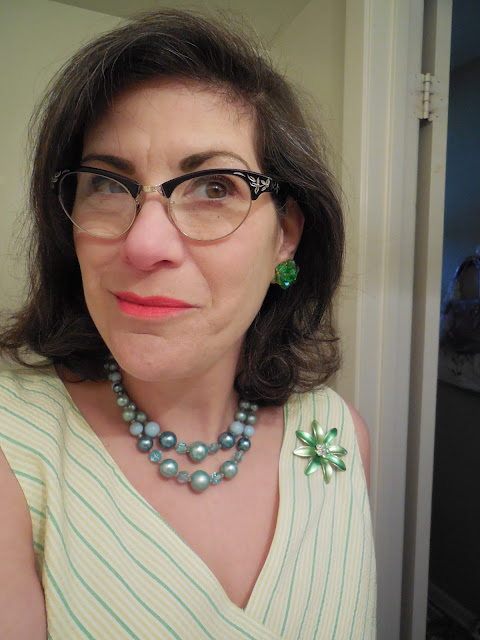 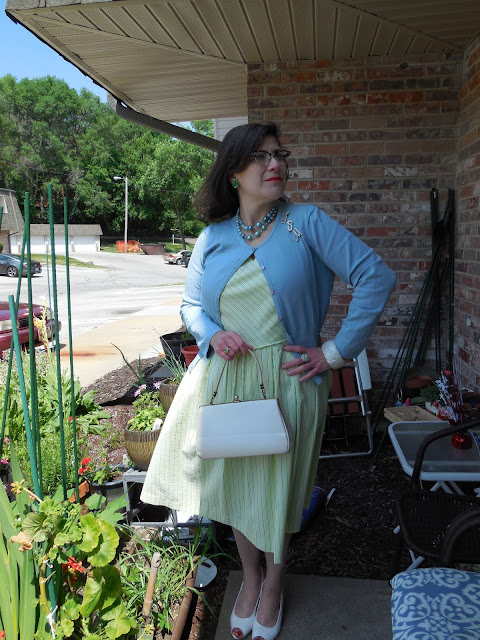 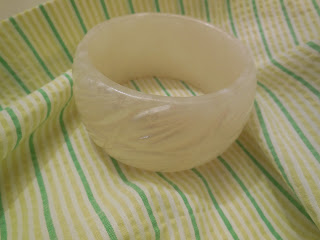 That bangle is so heavy I can't wear it on the same wrist all day. I have no idea what it is made of, but the plastic is opalescent and very sparkly. 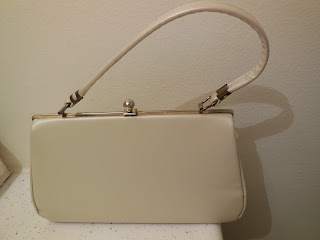 The vinyl handbag also has a bit of pearlised finish to it. 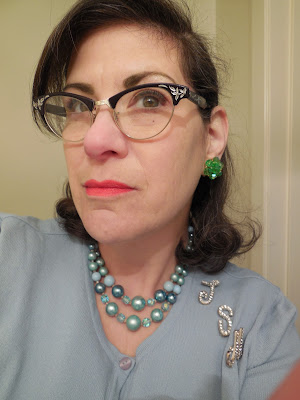 The boys are off to bird banding in the woods tomorrow, which means I have the day to myself. I'm excited! I might even find time to cut my hair, and polish my toenails. Eh, I'll probably just sleep until noon. Oooh, I do like the sound of that.

I hope you have a lovely weekend (even if the powers that be seem hell-bent on making certain you don't). Sleep is always a good form of escape, and it won't cause a hangover.

Now I really want to get some initial pins from Hobby Lobby!

Aren't you looking all cool, calm, and collected in those lovely white, blue, & pistachio green hues!
dragonflies are copper & red here in nepal, weird because the fewer & far between dragonflies in my native california were blue & green.
Have fun on your day away from the boys!

Oh how I long to be back in sleeveless frocks and sandles. But in saying that it hasn't been overly cold here, 18* the other day which is a cool day in summer not winter. I love art supplies too, I have a problem with collecting supplies. I have really nice German colouring pencils that I could happily add more to.

Nothing nicer than to discover pocket sketchbooks on sale! I pack one in my purse for each expedition. I'd have been doodling dragonflies for a week!

Pretty and cool describes all the elements of this post, especially the exquisite skirt fabric. Handwashing is not my favorite chore, however, so I'd probably pass it over at the shop and glom onto the seersucker. Good old indestructible seersucker -- and from ditto Talbot's. Well scored!

I'd take a screaming budgie over our godawful news right now. The only positive I can find is that all the Leave voters who have screwed up the country are getting increasingly indignant at the papers they believed in reporting that the economy is now completely borked. We all have to suffer it, but they wanted it...


You look like a breath of fresh air in your lovely outfits!

Love the skirt - so pretty and delicate. I also love your pumps. You seem to buy lots of shoes at K Mart - I've no idea what K Mart is and what, if there is one, the British equivalent might be. Love that Collins type bag. Maybe one day I might see something similar in the charity shop.

I absolutely love cardigans - so useful! I cannot pass up a patterned or floral cardigan. I have way too many cardigans but always make room for just one more...

@Violetlene
Be warned, Hobby Lobby's jewelry-making aisle is a dangerous place! I rarely leave with only what I set out for. The pins were cheap enough-under $2.00 each, if I recall correctly.

@Bibi
We must have spotted ten different types, some of which look so strange you can't believe they are insects, not toys. They're hard to photograph, but I'd love to see dragonflies from Nepal (future post idea?)

@Sue
I thought heavy woolen socks with sandals were a, "Thing" now!

@Beth
I've been trying to convince Danny that a sketchbook is as important as a camera as you can get details a photo might miss. He's not convinced, but I've been collecting interesting rocks, shells, and leaves for him to work at drawing. He likes to remind me that Audubon was only able to draw the birds so well because they were dead. Point taken.

Even if your economy survives (and I'm thinking it will, after things settle down and it looks like the government might know what the fuck they're doing)the social damage is going to be immense. That will be more difficult to mend than the economy. I'm afraid we might be in a similar situation come November, should Trump become president. You'd think politicians would be past using fear of the Other as a campaign tactic by now, but I guess it is still effective, unfortunately.

I really am sorry-this must be an emotionally gut wrenching time for you and the other 48% of the voting public.

@Veronica
K Mart is a low-end department store that sells everything from clothing and cosmetic to housewares and automotive supplies. The quality of the merchandise is shockingly good, but the place isn't terribly well-branded and is seen as terribly downmarket these days. Most of the stores across the country have closed, and we only have one left in Nebraska. I like the, "One-stop-shop" aspect to the place, but I know their days are limited. The end-of-season shoe sale is epic. I once came home with a dozen pair for about fifteen dollars-cheaper than the thrift store.

The true Enid Collins bags were made in Texas from the late 50's through the 70's (She was the wife of a cattle rancher). I only have one genuine Collins bag, and it is a wooden box bag with a bird on it. They don't survive well as the gems fall off, and the cheap vinyl handles were never intended to last fifty years. I have no idea why I've been finding so many of them as I went years looking for ONE without any luck.

You have a wonderful collection of cardigans, and I always enjoy seeing them-you offer some great inspiration in your posts.

Looking pretty and fresh and delightful, Goody! I'm loving both those outfits and wishing we'd got weather decent enough not to have the heating on full and a cardi on in the house.
I've never seen a swarm of dragonflies, if I see one I usually squeal with excitement let alone a group of them.
Hooray for cheap craft supplies!
Like most of the bitterly disappointed Remain voters I'm spending as much time as I can away from the ever depressing news. Thank goodness it's the festival season where we can live in a field and drink till oblivion. xxx

@Vix
I imagine the festival crowds are rather encouraging, decent types that can make you forget the world outside the campgrounds.

@Ann
I hope summer arrives for you soon, even if just for a few weeks.