Last One in the Pool is...Wait, Where is Everyone?!

We had the pool to ourselves this morning. We were there for an hour and a half without anyone even poking their head through the gate. It was a bit cloudy, but no rain in sight. School is out-where is everyone? I really hope they aren't spending summer sitting at home texting their friends on smartphones rather than getting outside and you know, interacting. 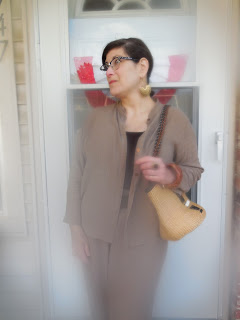 Outdoor photography has been a challenge of late. The high humidity fogs the lens on the camera the moment you step outside. 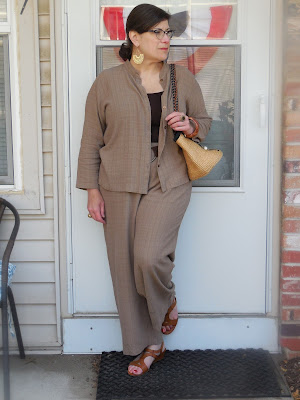 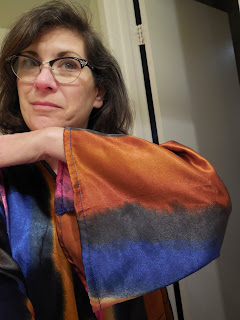 I'm a day late with Caftan Sunday, but I hope you'll find this one worth the wait. It is a silky, nylon parachute material, and judging by the uneven seams-home sewn. I paid .49 cents for it figuring I'd recycle the material into something else. 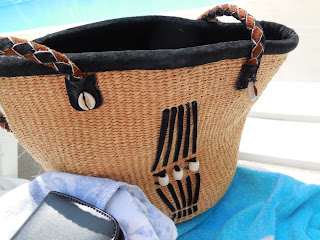 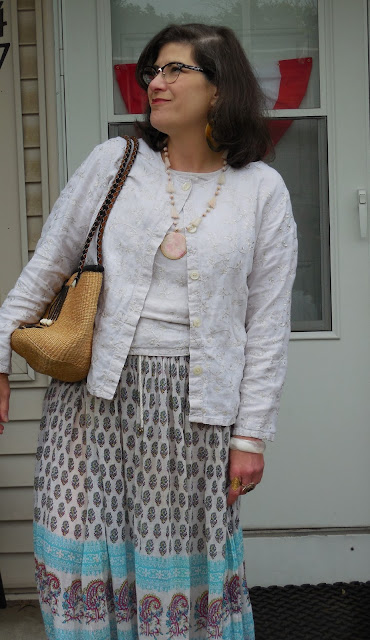 When Vix mentioned how much Indian block print gauze skirts and dresses were selling for, I nearly fainted. I have some I've been wearing (to shreds) since the late 70's, but this one was something I happened upon in the Goodwill last week. I paid .99 cents for it-and it has the all-important (to young people paying crazy amounts of money for these) metal bells at the end of the drawstring waist. I don't really care for it, so I'll look for someone with more money than brains to take it off my hands.

The sleeveless shell and matching linen jacket were purchased years ago at Talbot's. There was a matching skirt as well, but I have no idea what became of it. I don't wear the pieces often, but when I do it is always a delight. I like the embroidered pattern on the linen, and though it wrinkles a bit, I still feel wonderful wearing it. It might seem strange to keep something that gets worn once or twice a year, and I suppose it is. That said, I wouldn't dream of parting with either piece and will probably still be wearing them when they're threadbare. Quality Irish linen is worth hanging on to. 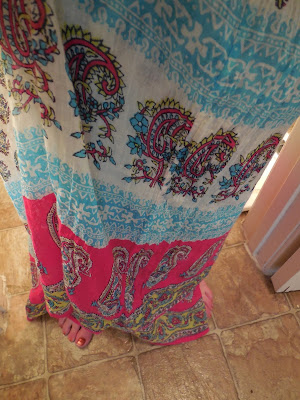 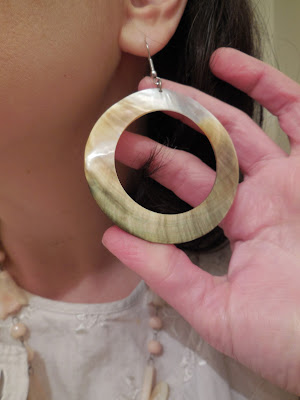 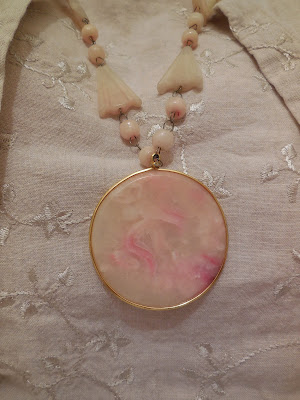 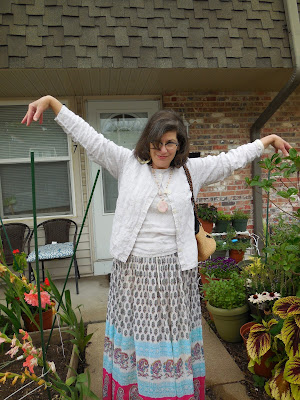 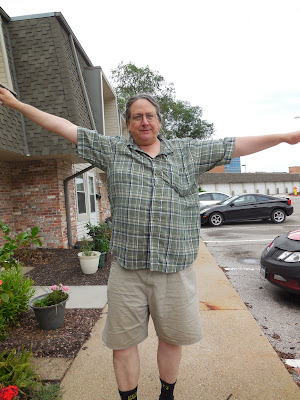 Sigh. I suppose the neighbours already know we're bonkers, so no point denying it.

Well what do you know? We've made it through Monday. Onward!

Gotta get me some of that Eau de Gaga!
Love that Eileen Fisher suit!
I've not had problems with my camera's lens steaming up despite the humidity here (85-95%)?
I rather like that caftan wonky seams and all!
Braising through Ramadan here in subtropical misery,
Bibi

I love hearing you talk, your accent is awesome!! Pool to yourself huh, so where were the bombs into the water?? The morning is the best time of the day to be out.

Love the Eileen Fisher suit and I love your hair up/off your face - very elegant. I also love the linen twinset, I bet it will last forever. I remember those skirts and I had a great one with tinkley bells on the end, too. God knows where it's gone - to the great charity shop in the sky, I think.

I spent £6.99 today on 'Violet Eyes' by Elizabeth Taylor. First sniff was very violetty and good. I'll test drive it tomorrow and report back. If it's nice I'm going to buy several more bottles. I also espied Green Tea (Elizabeth Arden) in Camomile, Lavender and one other I couldn't read with out my glasses; only 6.99, too. Have you come across any of them? I like the mainstream Green Tea but the smell doesn't last....

@Bibi
Definitely put it on your list for your next visit to the US (it wouldn't be worth paying taxes on to have it sent to you). For ten bucks you get a great fragrance, and a well-made bottle (even if it does look like a Bandit rip-off).

@Sue
You might be the only person outside of Chicago to find that accent attractive!

I really DID think about acting foolish as there were two young workmen on the roof of the clubhouse fixing the compressor unit. They would have been horrified! Danny talked me out of it because at 11, everything (especially your mum) is embarrassing.

@Veronica
Violet Eyes is a great fragrance, at an incredible price. I'm always surprised at how good the Elizabeth Taylor perfumes are-the Gardenia is lovely too.

I'm not in love with the Arden Green Tea scents, but Danny is. He has most of them, and as you say, they don't last long. They're cheap though, so you can re-apply freely without minding the cost. I think the Green Tea and Camellia is his favourite-they're all rather unisex. The honeysuckle and green tea is nice and light as well.

@Vix
You're kind.
I spent years trying to lose my accent (and I did, more or less) only to get old and become somewhat militant about retaining it. I've never been compared to Meryl Streep though! I'm going to show my kid this comment next time he's teasing me about the way I speak.

Put me down for the caftan in The Will. Just the thing for watering the plants out front in the morning without scaring the kids waiting for a bus.

The linen suit is timeless elegance, indeed. Do like the hair sleeked back behind the ears to keep the clean, lean lines!

You have an excellent speaking voice -- not a vowel is dropped! Never mind losing the accent, I spent my youth learning to speak "Received English" for voice work, only to be hired for mah flat Midwastern twang that sounds so sincere and frandly...

If you wear it every year, what does it matter if you only wear it once or twice? The linen will get worn.

@Beth
I've heard that the Indiana accent is considered the most, "American" by broadcasters.

@Mim
I'm running out of space! I'm serious-I might need to rent storage for my clothes.

@Ann
Thank you. The caftan is comfortable, and very lightweight-perfect for summer.