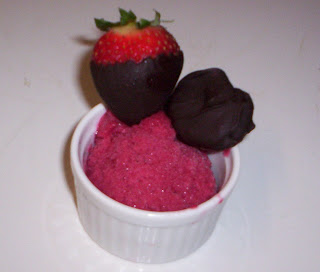 What hits you first is the strong flavour of pepper (well there are eight peppercorns in the recipe, what did I expect?) though after a few spoonfuls it becomes less pronounced-your palette does adjust to it. I did not taste the plums prominently, which was disappointing as I'm not really wild for dry red wine. The recipe features lemon zest and cinnamon along with the plums and wine which ought to have given it a spiced wine taste-but it did not. I cannot really adequately describe it except to say it was much more wine flavoured than anything else, except perhaps black pepper. I did however really enjoy the chocolate dipped strawberries and prunes. Really, prunes. Think of them as giant rasinettes.

The sorbet recipe is in the current (August) issue of Gourmet.
Posted by Goody at 6:40 PM
Labels: Gourmet Gone Adequate