A Summer Dinner of Borscht and Kasha 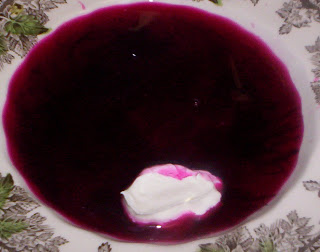 My Father's parents were from Ukraine and Belarus and the only memorable thing my grandmother ever prepared for me was hot chocolate. It was, exceptional hot chocolate (and she splurged buying Droste cocoa to keep on hand for her grandchildren-no small expense in those days). After my grandfather passed away, she married a man who was German and he would fish for herring which he'd bring home and she'd pickle. Mind you, they did all of this (along with making cherry wine) in a one-bedroom apartment in a high-rise in Chicago. Their apartment always reeked of pickling spice and onions. While I might appreciate it more now, I considered it a sort of ordeal to go over there as a child.

What my grandmother did not do however was make any typically Eastern European food. She never made borscht, or kasha or even pierogi. No, my grandmother considered those foods of her peasant past and instead, when she really wanted to treat us to something special, took us down the block to the fast-food joint for a fish sandwich. They didn't have soft bread in Ukraine, and the squishy bun on a filet-o-fish was to her mind, the high point of civilisation-there just wasn't anywhere you could improve from there.

It wasn't until I married that I began making kasha and borscht, both of which I served this evening. I'm sorry the photograph did not capture the ruby, gem-like quality of the borscht, as it was truly beautiful against the white of the sour cream. I also diced-up some cold, boiled potato in it, which I'm told is traditional.

Borscht may be served hot or cold, but with the awful humid weather we've been having, a cold supper was just the thing.

2 large bunches of beets, peeled and cut into small matchsticks. Also use the greens, chopping them fine
2 ½ quarts of water
1 medium onion, chopped fine
2 stalks celery, diced
1 tablespoon dried dill (or ½ cup fresh)
2 tablespoons salt
Juice of one lemon
½ cup sugar (adding up to a whole cup depending on the sweetness of the beets. Always better to adjust by adding more later)
Salt and pepper
Boiled potato and sour cream


In a large pot add the beets, water, onion, celery, dill, salt, pepper, lemon juice and half the sugar. Bring to a boil and simmer until the beets are tender (about 45 minutes). Chill and top with potatoes and sour cream.

Over medium heat, melt 2 tablespoons of the butter and add the onions and mushrooms. Begin boiling water. When mushrooms and onions are soft, push to one side of the pan and add the other two tablespoons of butter. Toss the kasha with the egg whites and coat well. Pour into pan and stir constantly until dry. Add the boiling water and bouillon cubes and bring to a boil. Reduce heat to simmer, cover and cook until all the water has been absorbed-about 10 minutes. For Kasha Varnishkas-serve tossed with cooked bow-tie pasta.

Leftover kasha makes a terrific filling for knishes.
Posted by Goody at 4:59 PM