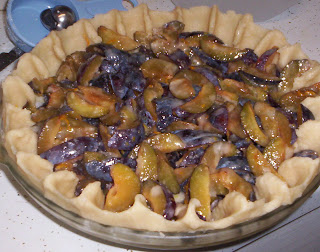 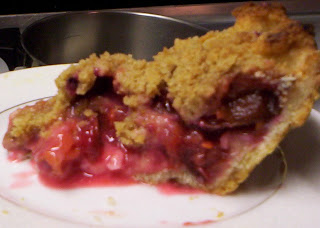 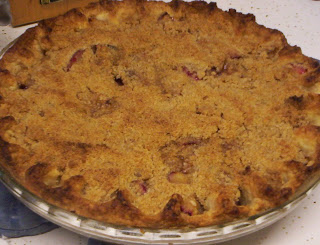 I finally got my hands on some prune plums (very difficult to find in these parts, and a short season at that. I would sit and eat them one after another, left to my own impulses; so to save myself (from myself) I baked crumb-topped plum pies.

The recipe comes from my favourite cookbook (The New York Times Heritage Cookbook) though I used my own piecrust recipe, as it did not suggest one. For some reason I thought it needed a sweet crust (I typically do not add sugar to pie crusts) so I added about 4 tablespoons to my regular shortening/vinegar based crust and it worked well. You have to be careful if you're rolling it our right away as sugar crusts tend to be a bit fragile. I would also try to make the crust quite high-sided as the filling will be quite deep.

Preheat the oven to 400 degrees F.

Prepare a single piecrust and chill it as you make the rest of the pie.

Combine the plum slices, granulated sugar, cornstarch, orange peel, and salt in a large bowl. Pour into pie shell. In another bowl, combine the flour, brown sugar, cinnamon and nutmeg. With a pastry cutter, work the butter in until you have a fine meal. Sprinkle over fruit. Bake about 40 minutes but begin checking at thirty in the event it begins browning too much (you can cover the top with foil). Cool before serving.
Posted by Goody at 11:20 AM
Labels: Fruit pies, Pie, Sweets