How I Was Nearly Born In A Restaurant 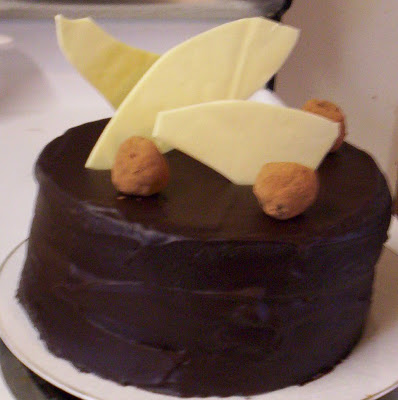 Before you laugh too heartily, the cake isn't quite as lopsided as it appears. It slid about on the plate in the fridge, but looks much better in person. I realise it borders on pathetic to bake oneself a birthday cake, but at least I got the cake I wanted.

My mother died many years ago and I never thought to ask questions about my birth (she probably wouldn't have remembered much other than the fog of ether they routinely gave women back then). My parents weren't what you'd call sentimental and didn't bother with a baby book either, so most of the details regarding my start in life are kind of vague. I do however know that I was very nearly born in a restaurant.

You see, my mother had spent close to three days in labour with my sister, and after all that time without a thing to eat (they did however permit her to smoke though-ah, the 50's) she was determined to get something to eat before heading off to the hospital. Mind you, the hospital was quite a good distance from where they lived, though admittedly Chicago traffic wasn't what it is today, and it was a Sunday morning.

I think she was in labour and delivery for ten minutes before she pushed and that was that. For years after, when we'd drive past "Mr. Ricky's" she'd point and tell me how I was nearly born there.

I wonder what she ordered?
Posted by Goody at 10:15 AM
Labels: Cakes, Family Memories

The cake looks wonderful, and making it yourself is not pathetic at all, as long as you are happy with it.