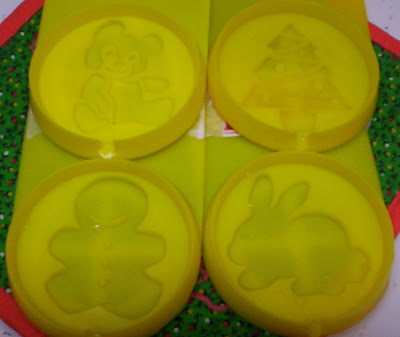 I'm fortunate that I live in a place where many of the small towns still have thriving main streets. Today, I ended-up at the independent drugstore getting prescriptions filled. They have a wonderful toy aisle with really unusual items, and a decent selection of housewares and sewing materials. After purchasing a farm toy for Danny (the combine came with a silo, two figurines and some rows of corn to assemble) I took a quick look through the housewares to see if they had a jam bag. They didn't, but there in a corner were four hard plastic lollipop moulds designed to withstand the heat of hard candy. They were clearly from the 1960's. Judging from the labels (and price) my guess is the owner found them in a storeroom and decided, "what the heck, maybe someone will want these". Indeed! I've been searching for hard candy moulds for the longest time. The few one can find on the web are very expensive things.

Guess I know what I'll be doing tomorrow.

In other news, I bought another 18-pound bag of grapefruits-this time for the grand sum of $4.00 I haven't looked them over yet, but I suppose the nicest will be turned into marmalade. Speaking of marmalade, I was trying to reach the half-pint ball jars at the grocer today but could not. The nearest package was taped together and missing a jar. I sought out an employee to help.

(He was smiling) "So you looked for the shortest guy in the store, huh?"
(Embarrassed) "Well, no…I"
(Still smiling) "I'm only kidding, I can climb up there, what do you need?"

So I showed him the case of jars I was trying to get, behind the damaged ones.

"I guess you wouldn't want a case minus one."
"Well, not for eight dollars."
(Looking at box) "We can't really sell these, how's two bucks?"
"Awesome!"

I promised him a jar of marmalade next visit. For eleven otherwise fine Ball jars, that was the bargain of the day.
Posted by Goody at 5:54 PM
Labels: Candy, Canning, Country Living