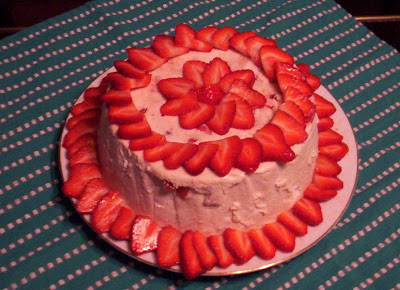 Guess what I was making at 4:30 this morning? Well yes, coffee is a given, but I was thinking of something with a bit more eggs and fruit. That may sound like a horrible hour to be puttering in the kitchen but for anything complicated it is ideal. Perhaps others can make multi-stepped dishes with a child running about, but I cannot. Egg custards and children just don't work because that fraction of a second you turn your back to find whatever toy he needs immediately and well, you're scraping burnt egg off your good enameled pot. So 4:30 it was.

I'd been promising Danny a strawberry Bavarian for quite some time now (background story, HERE) and when the first beautiful Florida strawberries hit the store shelves this week, I figured it was Bavarian time. The berries were affordable too, which made it all the nicer.

The recipe comes from the April 1973 issue of Gourmet. I don't own any fancy 2-quart moulds (though I have over a dozen 1 quart sized-go figure) so I used my soufflé dish and it unmoulded easily. It did however; require a bit more decorating that it would have in a fancy mould.

The original recipe wanted ½ cup chopped peaches, ½ cup diced pineapple and ½ cup diced strawberries. I didn't feel like fiddling around with cooking pineapple (so the gelatin would set) so I used all strawberry instead. I think this was a good call; particularly this time of year when any peaches to be found would be rather tasteless. I also omitted the 3 tablespoons of kirsch, as I didn't want to overwhelm the strawberry flavour from these wonderfully fresh berries. With a mixture of fruit I can see where the added depth would be a good idea but again, with strawberries, the small bit of vanilla in the recipe seemed adequate.

The Bavarian really needs to set for a number of hours before unmoulding and serving. We spent the day at the Union Pacific Railroad Museum in Council Bluffs, Iowa. 3 year old+ train simulator=hours of fun whilst Bavarian sits at home in the icebox chilling. The museum is run by volunteers and is free. I enthusiastically recommend it should you ever find yourself in Council Bluffs, Iowa with time to kill.

Beat six egg yolks, slowly adding sugar until it is pale and ribbons when beaters are lifted. Slowly (in dribbles, really) pour the scalded milk into the mixture, whisking constantly. Transfer to a saucepan and cook over moderately low heat, stirring constantly until mixture thickens and coats a spoon. Do not let it simmer. Remove pan from heat and stir in the gelatin softened in the water and vanilla. Stir the custard until the gelatin is completely dissolved. Pour it through a sieve into a bowl (you'll be surprised at the tiny bits you get out). Let it cool until it thickens, but do not let it begin to set.

Put the two cups of strawberries through a food mill. Add the diced strawberries. When the custard has cooled, fold in the fruit mixture, combining well. Whip the cream until it holds very stiff peaks. Fold into the custard/fruit mixture.

With a pastry brush, lightly oil the mould and then pour the mixture into it. Cover with foil and let sit at least four hours before unmoulding. All I needed was a thin knife around the perimeter, but you may need to dip it in water for a few seconds to unmould. Garnish with fresh or glaced strawberries.
*Update-Danny didn't care for it. He politely ate a few bites and asked if he could "save some for later." I'll be in my bedroom banging my head against the wall if anyone needs me.
Posted by Goody at 5:31 PM
Labels: Bavarian, Dannypants, Strawberry

It is now 2018 and I have made Danny another Bavarian-coffee flavoured. He liked it this time. Whew, it only took 10 years!

We still laugh about his fascination with the dessert. When I made this in 2008, it was one of the most complicated recipes I'd attempted. That seems laughable now, but you have to start somewhere. My husband will agree-it was a VERY steep learning curve.

If you're new to cooking, don't despair if you have trouble softening the gelatin, or whipping the cream-you'll master it in time. Relax, and enjoy learning.

Also, if you are at witt's end picking up after a toddler, let me tell you-a teenager's room is far, far, worse. Go put your feet up and stop worrying about it.