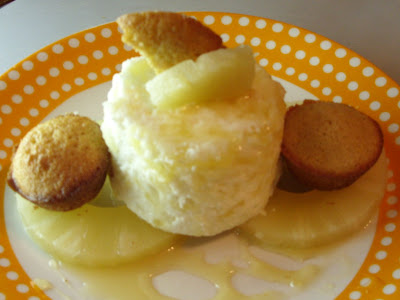 Well, they're not exactly deformed, but I don't own madeleine pans so I used mini-muffin tins. They were still delicious, and I didn't hear any complaints...because we were all too busy shoving cake in our mouths.

The madeleine recipe is from Dorie Greenspan which means I've made two of her recipes in as many days. That means we have a new category: Come Let Us A-Dorie. Dontcha love blog tags?

The madeleines are a wonderful combination of honey and warm spices. Usually, I like cardamom with pineapple, and I thought about substituting it for the cinnamon, but ultimately I decided to follow the recipe the first time. The results really were excellent.

I served a dinner of red lentil curry, rice with spices, peas and raisins, and various breads and samosas. The pineapple dessert went well.

Have time for a laugh? Mr. Eat The Blog asked if I made any chutney to go with dinner and I just pointed to the second shelf of my canning and suggested he could one of about twenty different jars of chutney. That was amusing, and really the whole reason I am so obsessive with my canning-in the middle of February I had nectarine chutney to serve with dinner.

Anyway, the one part of this recipe that I wasn't pleased with was a reduction of pineapple juice to syrup. I simmered the juice with cinnamon and cloves and then rapidly reduced it to a couple tablespoons-but it was just too sour. I think it could be made to work, but some additional sugar would be in order. Anyway, I don't think the recipe will suffer for lack of sauce.

The madeleine recipe may be found HERE.

For The Bavarian Cream:
(From The Betty Crocker Picture Cookbook, 1950 ed. with a few variations of my own)

In a saucepan, heat the pineapple juice until hot but not boiling. Stir in the softened gelatin, sugar, and salt. Stir until dissolved. Stir in the crushed pineapple and lemon juice. Remove from heat. Place bowl into a heatproof bowl filled with ice cubes. Stir occasionaly until partially set.

Whip the cream and measure 1 cup.

When gelatin has partially set, beat it for a minute on low with an electric mixer. The cookbook says a rotary mixer and if you have one, God love you, you should use it. Carefully fold in the whipped cream.

Rinse six large ramekins with water and fill with mixture. Cover lightly with plastic and chill several hours before unmoulding.

Run a thin knife around the edge a couple times. Invert on a plate, rap the bottom a couple times and it should plop out with a terrific noise. If you happen to have a four year old nearby you can amuse the child to no end by suggesting the dessert if farting. Or not-you probably don't need parenting advice from someone like me. You definitely don't want etiquette guidance. Hey, my dessert is farting!

This would be lovely served over pineapple rings, or canned, spiced pineapple that you made last summer but (again) forgot to serve.
Posted by Goody at 6:30 PM
Labels: Bavarian, Biscuits, Canning, Come Let Us A Dorie, cookies, Heavy Cream, Pineapple, Real Super Classy Stuff Circa 1970