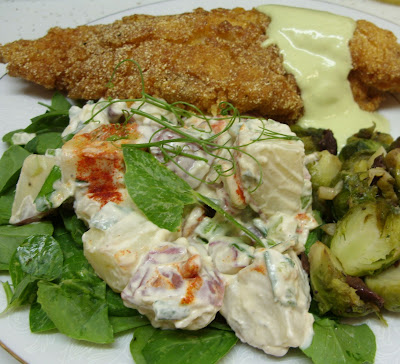 This was the first time I've made catfish, and probably the last. There wasn't anything wrong with it, but it wasn't all that special either-at least according to Mr. Eat The Blog, as I didn't try it. If he's going to eat fried fish, it will probably be cod from now on. Personal preference, I guess. He did eat it, but I suppose that was only because he insisted I buy it-at that point you're sort of obligated to finish the meal.

I tried out a new coating recipe and it worked well. I've never used Wondra as a coating, and I can see doing that again. You can find the recipe HERE.

The tartar sauce recipe at that link makes a whole lot of tartar sauce. That said, Mr. Eat The Blog really thought it was the best part of the meal. There's plenty of leftover fish so he'll have ample opportunity to use it up. The only change I made was substituting sweet pickles for dill because we all know how I feel about the smell of dill pickles(I'm making the scrunched-up-icky face).

And just because I know you're wondering-yes the potato salad does have radishes and scallions from the garden-all atop a bed of freshly cut pea leaves. Dang, I love my kitchen garden!
Posted by Goody at 4:53 PM
Labels: Cajun, fish, Fried Food