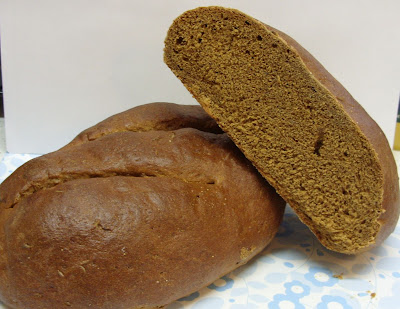 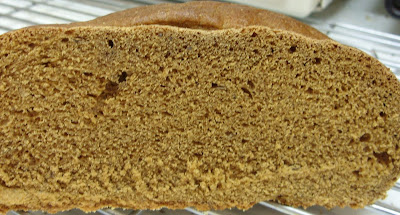 This is not what we would call "pumpernickel" in Chicago. I'm not sure what we would call it, because we don't have anything like it. In Boston (where I spent the rest of my formative years) we might call this a "brown bread" but again, it would probably be steamed. I don't know what this is, other than an early 1970's idea of what pumpernickel is. The recipe comes from the Better Homes And Gardens Homemade Bread Book.

There's nothing wrong with this bread, save for a very strong molasses flavour. I can see enjoying it with baked beans, or even a cream cheese and jelly sandwich. You probably wouldn't want pastrami on it, as the molasses makes it rather sweet.

I went ahead and used bread flour in place of the all purpose, and I baked it with steam in the oven rather than basting with water as the loaves baked. I also made a cornstarch glaze to be put on after the loaves are out of the oven. I will post the recipe with my modifications.

Heat water to boiling in a small pan. Add the diluted cornstarch and cook for a bit over high heat until it thickens. Remove to a bowl, cover with foil to keep warm.

In a large bowl, combine rye flour, 1 cup of the bread flour, salt, molasses, caraway seeds and shortening. Add the yeast and mix well. Add enough bread flour until you have a dough that can be kneaded. The dough is quite stiff and you will really need to work it well until elastic. Place in a greased bowl, turn to coat and cover. Let rise until doubled.

Grease and dust a baking sheet with cornmeal. Shape loaves and cover with a towel. Let rise until doubled. Preheat the oven to 375 degrees F. If you use a pan to create steam, place it in now.

Slash loaves, and create steam in oven. Bake about 40 minutes or until quite dark. I baked mine to an internal temperature of 200 degrees F. Brush hot loaves lightly with glaze and let cool completely before slicing.
Posted by Goody at 2:40 PM
Labels: Bread