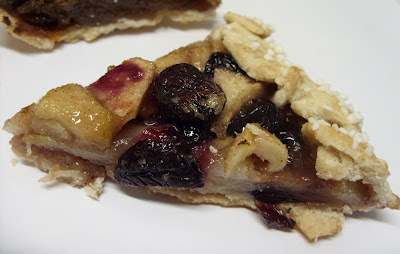 At my house, you get two kinds of pie even when it isn't Thanksgiving. 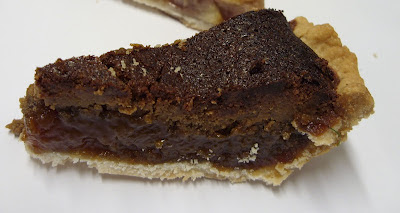 Yeah, I can't cut a slice of pie neatly to save my life, but I have worse failings to concentrate on.


Both pies are based on recipes in the wonderful book, Sweety Pies by Patty Pinner, who I'd like to have for my neighbour. Even if you never intend to bake a pie from scratch, pick this book up if you see it, the stories are terrific.

I've had excellent results substituting Sunbutter for peanut butter, and this pie was no exception. I did not have dark corn syrup either, but I combined Steens boiled cane syrup and Golden Syrup together and were I going to bake a pecan pie (which obviously, I'm not) I'd forgo the dark corn syrup entirely in favour of half Steens and half Golden Syrup. How it is that by-products of sugar refining can be so delicious is beyond me, but damn! I'm not being compensated by Sunbutter, Steens, or Lyle's and my opinions are my own. I use these products, and like them.

Preheat oven to 375 degrees F. Prepare pie crust, fit into plate and flute edge up high. I chilled mine as I worked because it was warm in the kitchen.

In a medium bowl, using an electric mixer beat together the sunbutter, vanilla, salt, and melted butter until well blended. In a large bowl, beat the eggs, syrups, and sugar until light. Fold sunbutter mixture into egg mixture really well making sure they are combined. Pour into shell. Bake until crust is golden brown-about 40 minutes. Let cool on a wire rack. Serve warm or chilled.

For The Pear Tart:

Preheat oven to 350 degrees F. Line a baking sheet with foil. Roll out pastry to a 16 inch circle. In a large bowl, combine the sugar, cornstarch, pears, vanilla, and cherries. mix well. Pile into pie crust leaving 2 inches around the perimeter. Pleat and fold the crusts up part way. Brush lightly with cream, sprinkle with pearl sugar, and bake until crust is nicely browned-mine took about 35 minutes. Let cool on a wire rack before serving.

Multiple pies? Love how you think - and bake! I was thrilled to find the SunButter variation since I blog for SunButter and I'm always looking for new recipes (which is how I found your yummy post). But as a fellow pie baker, I'm eager to try BOTH. Thanks for the inspiration!

If I blogged for Sunbutter, I'd weigh fifteen stone-you must have better self control than I.

I do want to say again, I use the product and don't mind saying so, but I do not work for the company, and this is not a sponsored post.