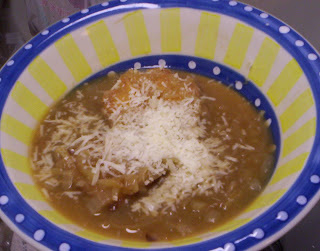 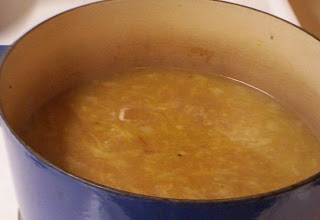 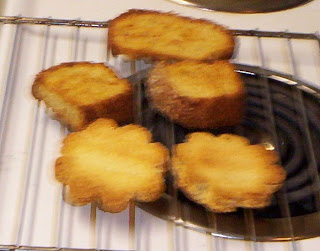 You can just forget about those small crocks for serving onion soup in-you're going to want a large bowl of this.

If you've never made your own, it might be a surprise just how different homemade French Onion soup is from the heavily salted clear broth with re-constituted onions most Americans are accustomed to. This soup isn't clear as it is thickened slightly with flour and contains a bit of butter.

A good slicer will make the five cups of thinly sliced onions a breeze, but a sharp knife will work as well. The soup needs quite a bit of time to cook-first softening and caramelising the onions and then simmering. I'd suggest saving yourself some effort by preparing the onions ahead of time (just cover them well so your fridge won't stink).

If you use bouillon rather than broth, omit the salt in the recipe. This recipe is based on the one in Mastering The Art Of French Cooking.

In a large, heavy pot cook the onions in the butter and oil with the lid on for 15 minutes over low heat.

Off heat, add the boiling broth, vermouth and salt and pepper. Return to heat and simmer partly covered for 30-40 minutes, skimming the top occasionally.

Just before serving, stir in the cognac. Ladle the soup over the bread in a bowl and sprinkle with cheese.
Posted by Goody at 5:29 PM
Labels: Soup