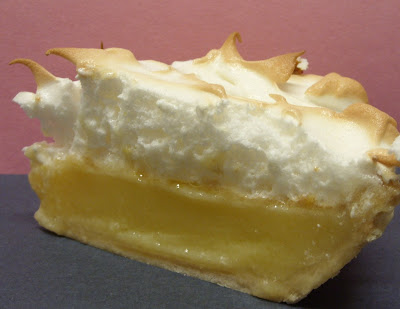 Confession, I've never made lemon meringue pie. Further confession-I'm not sure I've ever eaten one. Well, that's all changed now as I'm sure this pie will go into regular dessert rotation here.

For most of my life, I was under the impression lemon meringue pie was not only disgusting, but probably dangerous to eat. Like most misconceptions, this one came courtesy of my mother who once got sick on lemon meringue pie, the memory of which remained so strong she couldn't walk past a bakery case containing one without diverting here eyes. Similar reactions would play out at the mention of Spanish rice, Pepto Bismal,or bourbon and ginger ale. I'm not sure if the Pepto was prior or subsequent to the ingestion of the above mentioned food and drink, but my mother may have been the only case of someone actually getting a worse case of the shits from Pepto Bismal. So yeah, I don't know why I took her word for the pie all these years when I disregarded every other bit of motherly wisdom she felt the need to impart which I won't re-quote here to avoid bringing people here from Google searches of an impolite nature.

The pie, the pie, yes I'll get to that. You see, apart from my mother's warnings about food safety, there was always the issue of intimidation. I fear soft meringue. There's a reason I've yet to make a Baked Alaska, and it isn't because I don't like ice cream. No, I've never been quite certain what it was supposed to be like, having been forbidden to eat it. Was it soft like whipped cream? Crunchy like a baked meringue shell? Without a sense of what I was aiming for, I figured there were plenty of other desserts I could prepare without wandering into meringue territory. Besides, I'd read in many a cookery book about, "weeping" meringue. That didn't sound very appetising, and if anyone could make beaten egg whites cry, it was probably me. I avoided the stuff for years. I once made some brown sugar meringue bars that were probably overbaked as I still had no concept of what it was supposed to be like. Today, I stared at the three big lemons on the counter, shrugged, figured, "What the hell", and apologised to the memory of my mother. I baked the damn lemon pie. It is excellent. I did not throw up, reach for Pepto Bismal (or bourbon) and I'm kind of sorry it took my mother being dead twenty years for me to at last wander into the universe that is softly baked meringue. I'm sorry mum, but it is not like eating, "frothy spit."

The recipe is an old one, from the great big blue edition of the New York Times Heritage Cookbook. I used my own all-butter pie crust recipe, which I will include with the recipe. At first read of the ingredients, it sounds like an ungodly amount of sweetener (sugar and corn syrup) but against the tartness of the lemon juice, it ends up being just about right, if not a hair on the sour side. Consider yourselves warned-I would not reduce the amount of sweetness in this pie. I did not try any substitutions for the corn syrup, but I'd be interested to know if you try it. I have a large tub of glucose syrup I've never bothered to use, so perhaps I'll give that a try next time. Still, I'm loathe to mess with perfection, which this pie clearly is. This is really fantastic pie.

Combine flour and salt. Cut in butter until you have fine crumbs. Toss on water a tablespoon at a time and mix only until it comes together in a light ball. Gather together and set aside a few minutes before rolling out. Roll pie crust thin and high on the sides. Chill in plate before filling.

For The Lemon Filling:

Beat eggs until well combined. Add syrup and continue beating. Combine sugar and cornstarch and add to the mixture, beating. Add the lemon juice, rind and butter. Beat until mixed. Pour carefully into pie shell. Bake fifteen minutes. Reduce temperature to 300 degrees F. and bake another 45 minutes, or until set. Cool, then chill before topping with meringue.

Beat egg whites until foamy. Add cream of tartar and beat until stiff. Add sugar, a tablespoon at a time until well incorporated. Spread meringue over pie making sure to touch the pastry edge all around (so it won't weep). Leave the surface rough. Bake ten minutes, or until meringue is slightly browned. Cool, and chill again. Serves eight to ten, or three really greedy ones.
Posted by Goody at 5:44 PM
Labels: Lemon, meringues, Mother, Pie