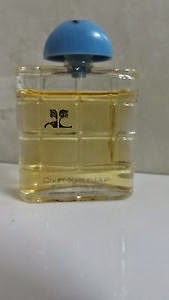 (Not my photo, but my bottle looks identical)


Midwestern winters are noteworthy for their length, and general severity. Though we feign surprise each year as the mercury drops, it isn't out of the ordinary to experience several months of misery. After the festivities of December have passed, it is a terribly long slog until the first pink rhubarb shoots start to show, often beneath a pile of April snow.

My mother didn't care for winter, like many others she'd make reservations and we'd fly off to Miami  Beach for a couple weeks at term break. At some point, my dad had the idea that it would be less hassle if we just bought a place in Florida. Phone calls were made, and soon my mother (and myself in tow) were off to Hollywood Beach looking at condominiums, with my dad planning to fly in and meet us at the weekend to see what we'd found. Ultimately, they found a place with a good view of the beach only to find just before signing that it had no access to the private beach, or something like that so we never did end up buying a place. Still, once we'd looked at all Hollywood Beach had to offer, my mother got bored with sunbathing and decided we should get some shopping in before returning to Chicago.

Shopping centres were still a relatively new-ish thing in the 70's, "Malls" as we know them today were still a few years off, but in Bal Harbor there was a collection of stores that were starting to be known as a" high-end shopping destination" (the Bolshie in me just shuddered to type that sentence).

I remember three things from that "High-end shopping destination." You could get cafe au lait before anyone that hadn't been to France knew what it was, there was some sort of mosaic fountain. and I was left alone in a boutique to pay for my mother's purchases and was instructed to, "Pick out something for your sister." I was eleven.

My mother would get bored easily, so she'd selected the items she wanted, and was content to wait for me in the cafe where she could smoke and drink. She signed a cheque, and I was to fill in the amount and give it to the saleslady when everything was wrapped and ready to go. I'd been left in the shop with a woman who as I recall,  looked like a resurrected Coco Chanel complete with French accent and hat (to be fair, everyone looked old to me then, so she may well have been in her twenties). I remember her trying to help by asking what sort of thing my sister liked, if she looked like me (she didn't), what was her favourite colour? With more than a decade between us I had no idea what her favourite colour was, much less what sort of clothes she liked to wear. I knew what perfume she wore because I couldn't escape it in the shared bathroom (Aliage) but beyond that, I hardly knew her tastes. In truth, she could have worn a bin bag and looked fashionable as she had good hair, a nice complexion and a figure no amount of dieting would ever give the likes of me. I don't recall her fretting much over what to wear-she'd get dressed and be out the door looking effortlessly chic-because it was effortless.

Some cotton, short sleeved sweaters caught my eye. Sporty, pretty colours, nicely knit. Wanting to just get away from Madame, I selected one in aqua blue to match my sister's eyes and handed it over to be wrapped. If there were price tags, I didn't notice. I think that was the sort of place where if you needed to ask, you couldn't afford to shop there. The name on the label sounded familiar, and suitably French so that it wouldn't look like some cheap gift from a trip to Florida.  As my mother hadn't offered any guidance or price limits, I didn't think about it-until it came time to fill out the cheque. It wasn't just the sweater of course, and I can't remember just how much it was in total, but I believe there were enough zeroes that I had to think about maths more than I was accustomed to in grade five. I can't remember if my hands were shaking, but they must have been. I do remember being concerned I would do it incorrectly, and have to chase down my mother in the cafe. All went well. 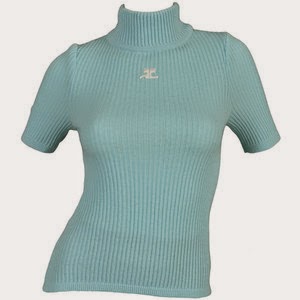 (Through the miracle that is the Internet, here it is-or at least a very close version. I remember clothes and perfumes the way some people remember weddings and births. I'll never be good at remembering birthdays, or weddings, but I'll remember what I was wearing.)


I met up with my mother, had a cafe au lait, and she never questioned the purchase, happily handing it over to my sister as though she had selected it herself. The sweater was worn once or twice before being banished to the bottom dresser drawer where she kept the horrible things relatives had knit/crocheted that would be unacceptable to discard. The Courreges sweater languished there among the pink and white angora granny square pullover vests, and uneven socks. Long after she had married and moved away, her dresser of clothes remained and I was often tempted in later years to liberate the sweater from the bottom drawer banishment but for some reason I never did. I had big boobs, it wouldn't have looked good on me anyway.

I was reminded of this recently by the purchase of a small vintage bottle of Courreges in Blue. The clothes might not have been my style (or my sister's apparently) but I can enthusiastically say I adore the fragrance. On paper, it doesn't sound like the sort of thing I would like (Basil? Coriander?  Patchouli?) but on my person-oh goodness, this is a gorgeous fragrance. Light, but the coriander keeps it from smelling clean and antiseptic-but not so much coriander that it starts smelling of B.O. It is a delicate balance with coriander, but it works so fantastically well here. For EDT it lasts, and lasts which is a nice surprise-almost nine hours later I can still smell traces of it.

Courreges in Blue is still around, though I can't vouch for the newer formulation. It isn't a terribly expensive fragrance to give a try, and there seems to be quite a bit of it around on ebay. I don't know how I managed to miss this one in the early 80's (It launched in '83) other than I was so deeply initiated into the cult of Guerlain that I likely wouldn't have considered wearing anything but Mitsouko or Chamade. Well, my loss-but I'm making up for that snobbery now by exploring all these overlooked gems.

I'm sorry I can't say what became of the pretty sweater. I hope she kept it and gave it to one of my nieces, but realistically she probably binned it. My sister wasn't terribly sentimental about clothes in the way that I am. I never did return to the "High-end shopping destination" that was Bal Harbor, so I can't say what it is like today, though it still seems to be a thriving place if you trust the Internet.

You've given us a suspenseful vision of your mum relaxing chez cafe whilst your younger self earnestly copes with the chequebook and sweater, Goody. The episode ended better than one anticipated.

The phrase "effortlessly chic" chills my bones even more than "upscale shopping experience." I award points for efforts as well as hits on target!

Coriander is very odd stuff indeed. My Indian spices are confined in a cupboard completely separate from all my other staples -- and in glass containers. Given the chance, they will escape and soon the cats smell like leftover vindaloo.

@Beth Waltz
I kept waiting for my mother to comment on the receipt, but she never did. We weren't wealthy, but she must have been feeling like we were at that point.

Cats can smell much worse than curry ;)

I can take coriander in small doses, but fenugreek makes me ill.

"Estee Lauder Courreges spring 2015 makeup collection, a limited lineup of 13 innovative products inspired from the iconic Courrèges mini dress and the Space. It’s the super lightness, translucency and the eye-popping color palette of the products and the futuristic design of the pieces that make this collection one of the most sought-after cosmetics lines of the new season. Both the brands are known for their innovative concepts and styles, therefore their partnership gives birth to a “pop-timistic” limited edition collection, which centers around fun zero-gravity colors, rich textures and special effects for the lips, eyes and the face. "
I didn't see any perfume in the collection.
I've grown quite fond of Florida & take my kids there for 'back to school' shopping.

@Bibi
perhaps after what Tom Ford did to Azuree the people at Lauder decided to keep designers away from their classic fragrances. I don't know if you had a chance to smell it, but it was horrid.

I'm dying to know what qualifies as "Zero gravity colours" (my face knows, *all about gravity* thanks very much), and that may be enough to get me to department store to check it out. Thanks for the alert!

Another one I've never tried! I love your perfume posts.

As a slow knitter, I have a very short list of people I consider worth my time knitting for. Starting with 'myself'! No languishing in drawers for my woollies. (Though I wouldn't make anyone something from granny squares anyhow.)

As for cat smells, yesterday mine smelled of Old Spice. She'd clearly been badgering the husbeast as he was getting dressed, and it had transferred from his hands to her fur.