The Camera is Repaired-Let's Celebrate With Some Photos 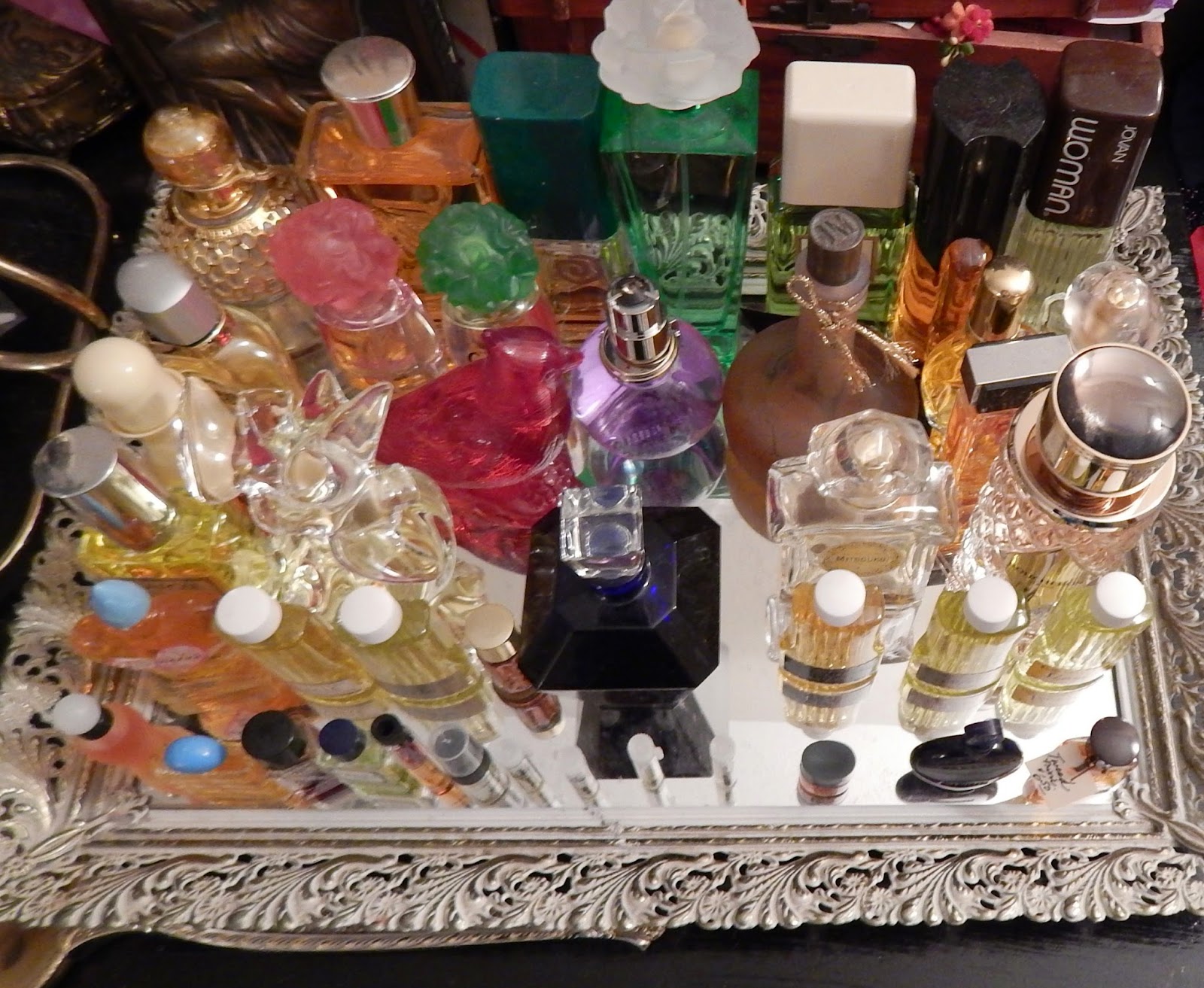 The camera is working again!
Much to my relief, because it turns out I got a much better deal on this camera than I realised at the time, and replacing it wouldn't be easy. I don't know what I'd do without our local camera shop (one of only a few left in the state) but I'm really pleased to have their expertise available. 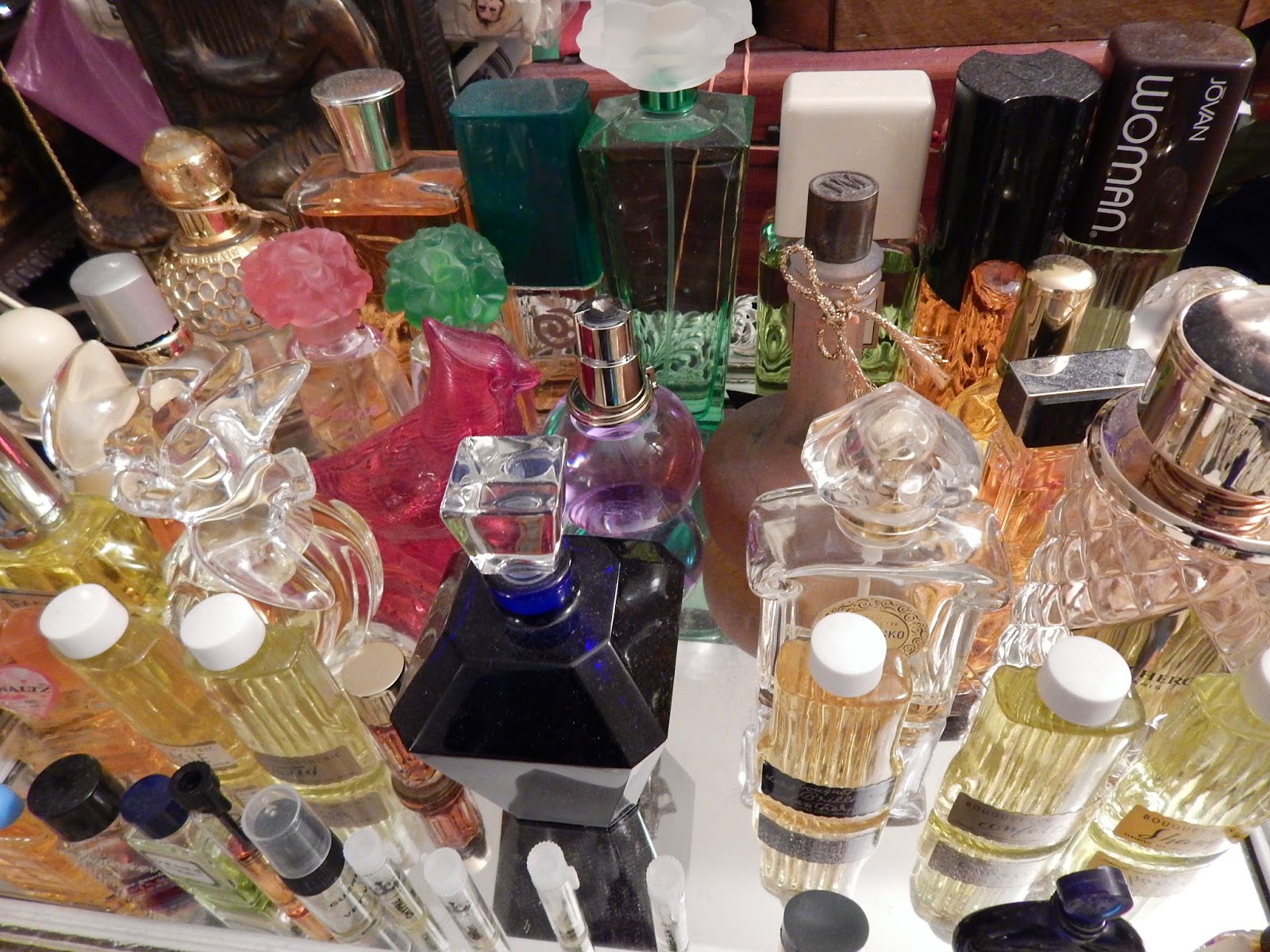 I'm a little ashamed to admit this isn't all of them. Quite an odd collection, the drugstore fragrances (Jovan Woman is a terrific fragrance, but you'd never know it by the uninspired bottle. Trust me on this one-best $12.00 you'll ever spend at Walgreens) sitting beside the rare exotics. When you examine them closer, the perfumes tend towards chypres, with a few florals thrown in for layering. The strong herbals like Innisfree, and Cabotine get used to freshen shoes and that sort of thing (OK, do I judge your sweaty feet? No, I do not. Don't judge!). That purple spherical bottle in the centre? A new "lightened" version of Arpege that smells like Glade solid room deodouriser. I haven't decided if I hate it yet, as I have kind of a soft spot for Glade because that's what we had in our finished basement to soak up the odour of mildew and cigarette smoke. Little white cone shaped thing that you could unscrew as much as you needed and it would dry up like a piece of seaweed-you remember those, don't you? Well that's the new "Stink du Arpege", but yes if I'm being honest it will end up as shoe deodouriser like the Cabotine. There's nothing wrong with fresh, I just prefer it on my feet. Do. Not. Judge.

The tiny blue bottle at the bottom right of the tray is my most recent purchase and I'm afraid I have once again fallen in love with an obsolete fragrance. Dans le Nuit by Worth. Gorgeous violets, civet, oak moss-everything I adore in a fragrance. Gone. It was brought back briefly in 2000 but the formulation was different from the earlier version. If you can get your hands on this stuff, it is worth whatever you have to shell out for it. Beautiful perfume-they really don't make them like that anymore. That large pink bottle on the right? Boucheron's latest offering that smells like cotton candy. I like cotton candy, and I like French Perfume, but not together. It will likely get traded as I keep hearing circus music in my head when I wear it, but being French it comes out like a New Wave film. Bad associations, bad perfume. Oh la fucking la. Who wants to go for a bike ride? 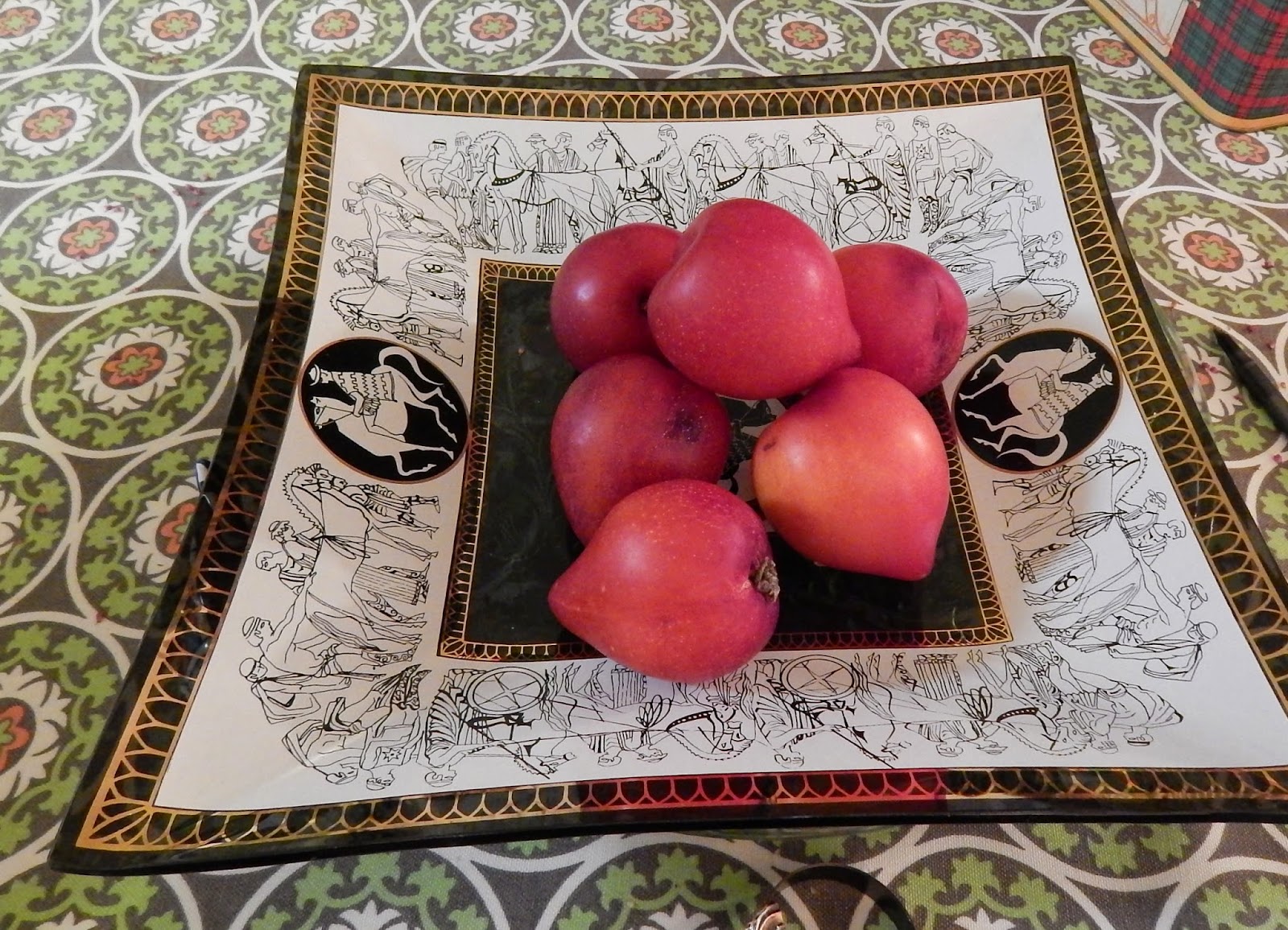 Want to scent a room with something you can eat? Honey Sunset plums from Chile have a very short season, and are at their peak right now. They start yellow, but after a few days ripen into the most breathtaking crimson, and the fragrance...if I could bottle it I'd never wear another perfume. The freshness of an apricot, the sweetness of sugar, and a citrus that reminds me of bergamot-just these few small plums make the dining room smell heavenly. Juicy and sweet with just the right amount of acid, these plums are perfect for eating out of hand. But grab them soon, because they will be gone in a couple weeks. No, I do not have money invested in a Chilean plum farm. 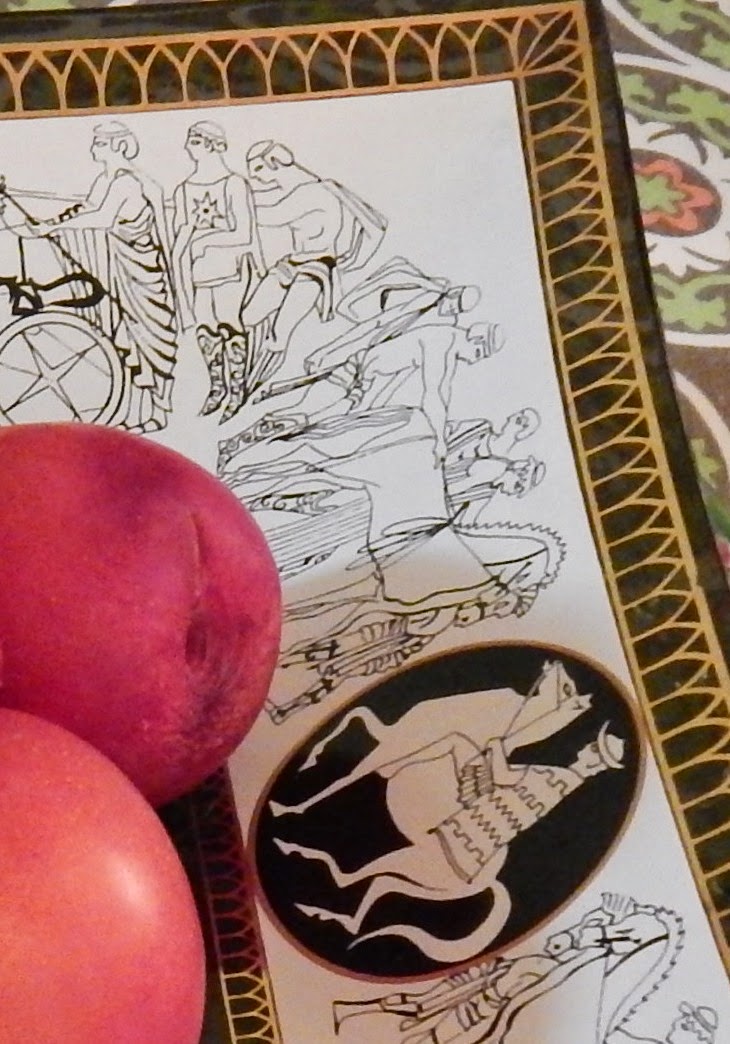 Something that ambrosial deserves a Greek bowl to display it. I think this plate/dish was intended as a large ashtray back in the middle of the 20th century when everyone was puffing away. I rescued it from a Goodwill last week... 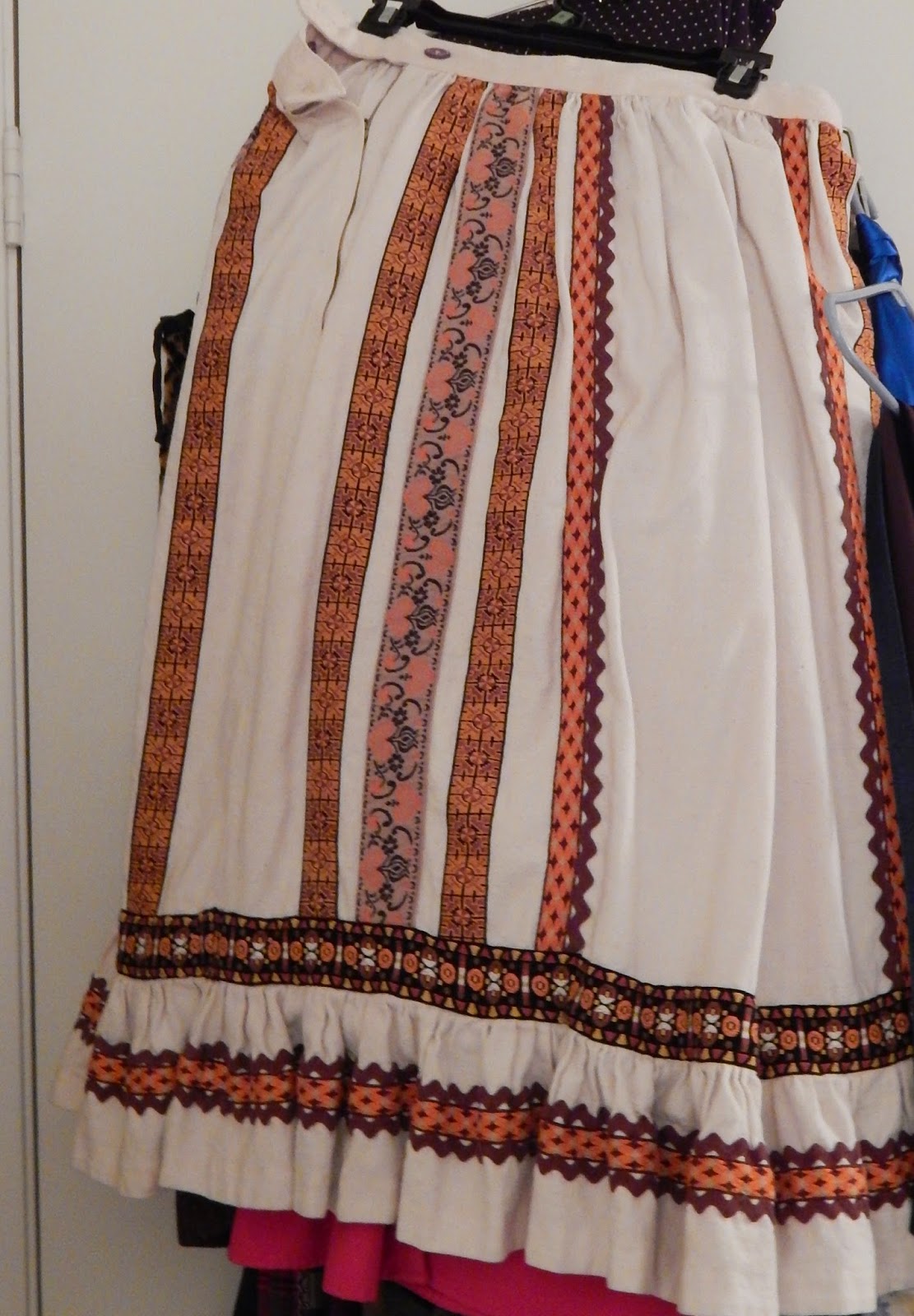 ...along with this skirt for .99 cents. It has that raw cotton fabric that always looks like it is stained, but isn't. It would be perfect for a festival, if I were the festival going sort (I'm not) but I have some old PG&E records I can put on, plug in a lava lamp, and freak the living shit out of the wee one.
So yeah, I'm sure I'll find an occasion to embarrass my kid wear the skirt. 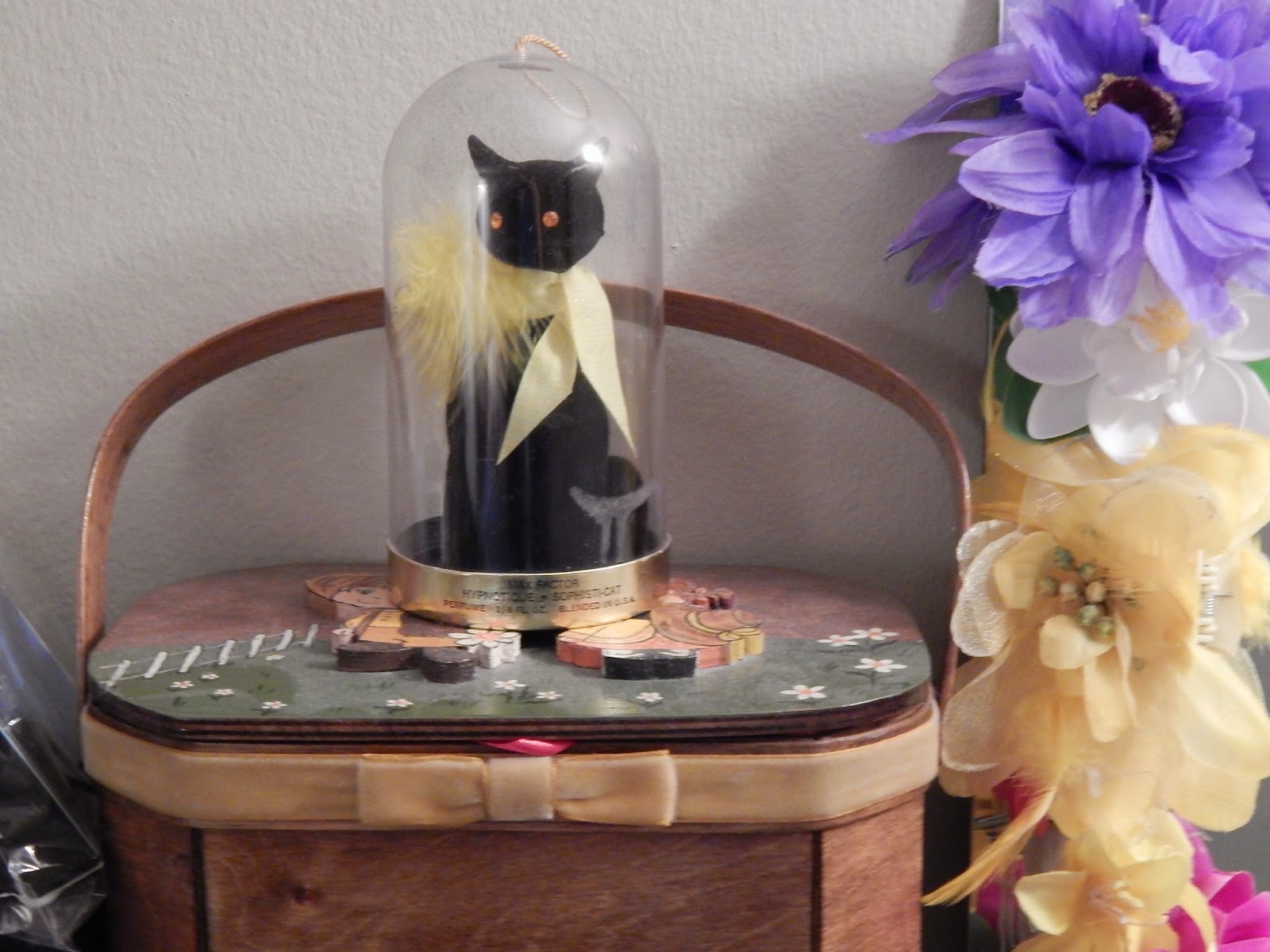 What do you think of that, Sophisticat?
"Meow."
Cat says, "Meow." Dig?

Unfortunately, Sophisticat was little help when it came to this dress. I bought it knowing the sheer material (silk?) was in bad shape. The beading is intact, but there are small holes, and slight discolouration to the fabric. My first thought was to cut off the sleeves, which would be a simple enough repair, but then the rest of the chiffon would look odd. It can be removed, but would it still be as interesting as a plain dress? 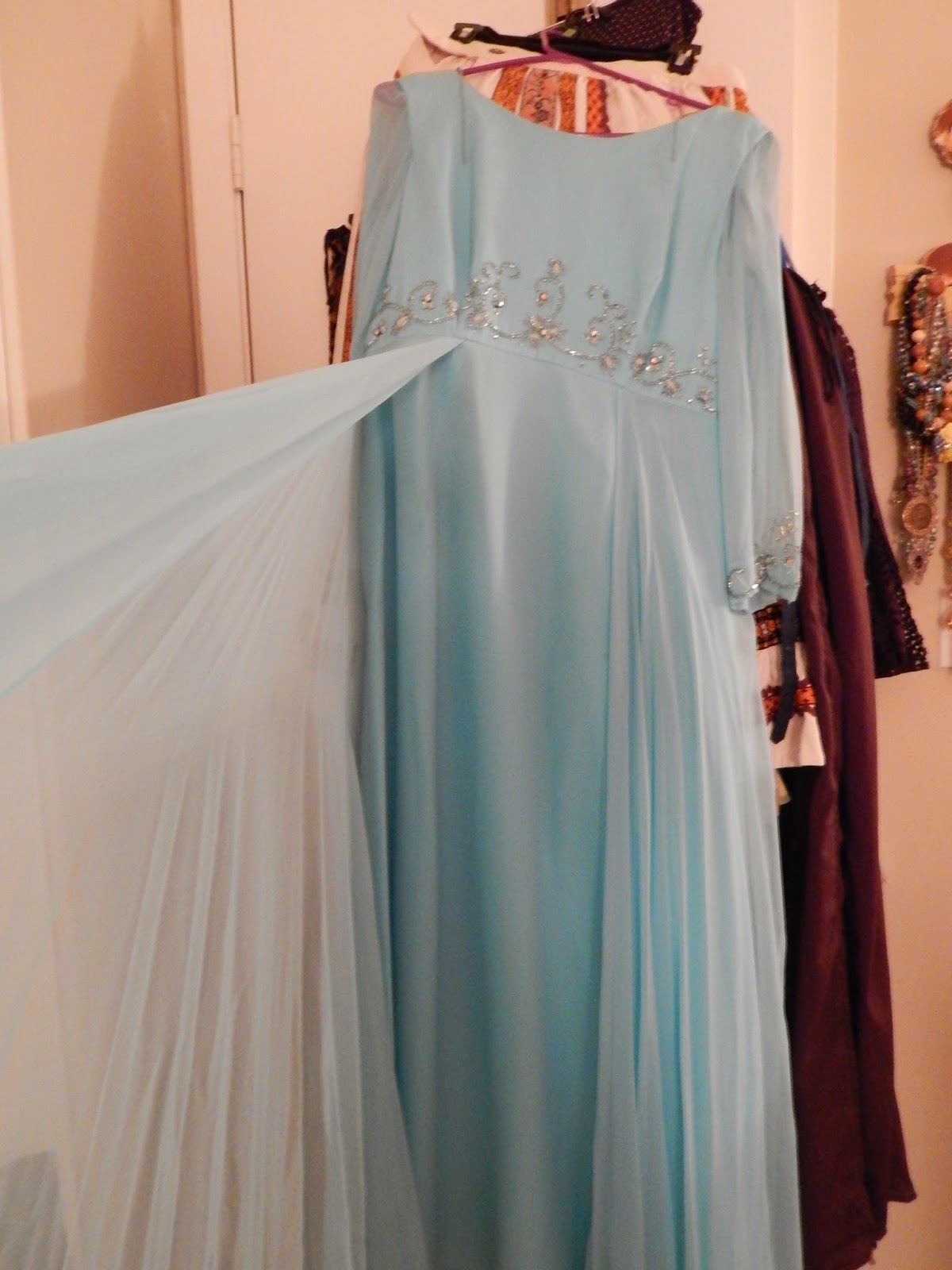 The bodice details would still be there, but I wonder if it would be better to have a slightly imperfect, yet dramatic gown rather than a plainer, but better condition one? 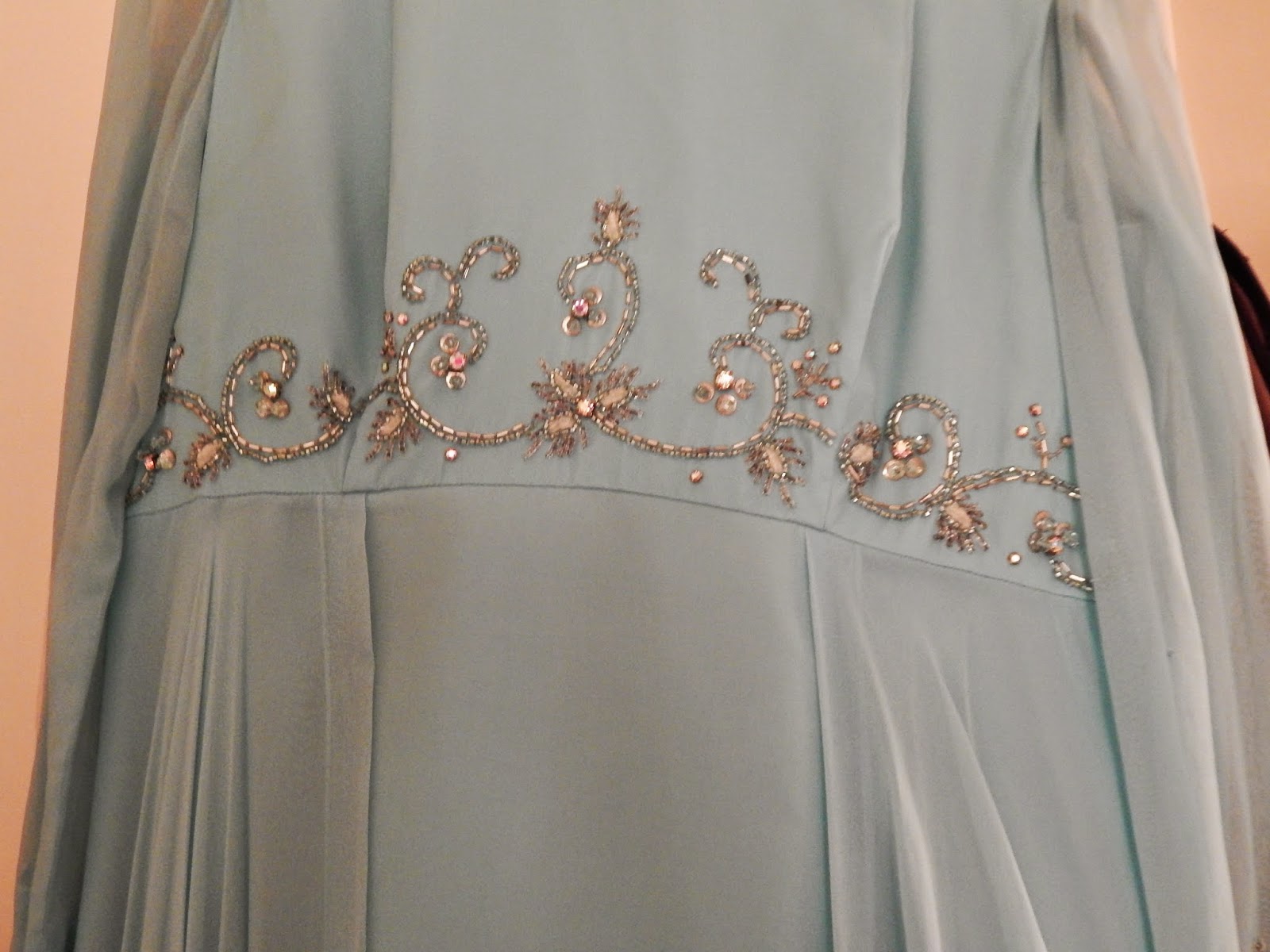 Decisions! What would you do?

We have *another* snowstorm on the way tomorrow, and then the plunge back into the sub-zero temperatures. I'm running low on documentaries to show on snowdays (I let Danny have a snow day when the public schools cancel classes, but we usually watch a film). We recently watched Finding Vivian Maier. Ugh, I wasn't prepared for seeing the small suburb I lived in from the age of ten through my teen years displayed through the photos and home movies of a woman who worked as a nanny there. I've done a rather good job of wiping the Highland Park years out of my life, and seeing it again, complete with interviews of people that speak exactly like me,  caught me completely off guard. I was expecting Chicago, not the tiny suburb I've done my best to forget. Horrible place. Horrible. If I had the talent, I could write Morrissey-esque songs about it, but I don't so all I can do is shudder at the memory, and try to select my documentaries more carefully. I do have one out from the library about Paul Bowles. That ought to be safe-I never lived in Morocco. We worked our way through,  Days That Shook the World which was generally well done, even if they did describe Chuck Yeager as an, "Uneducated backwoods hillbilly." That's a bit harsh, but it wasn't made for an American audience.
Finally, there's this: 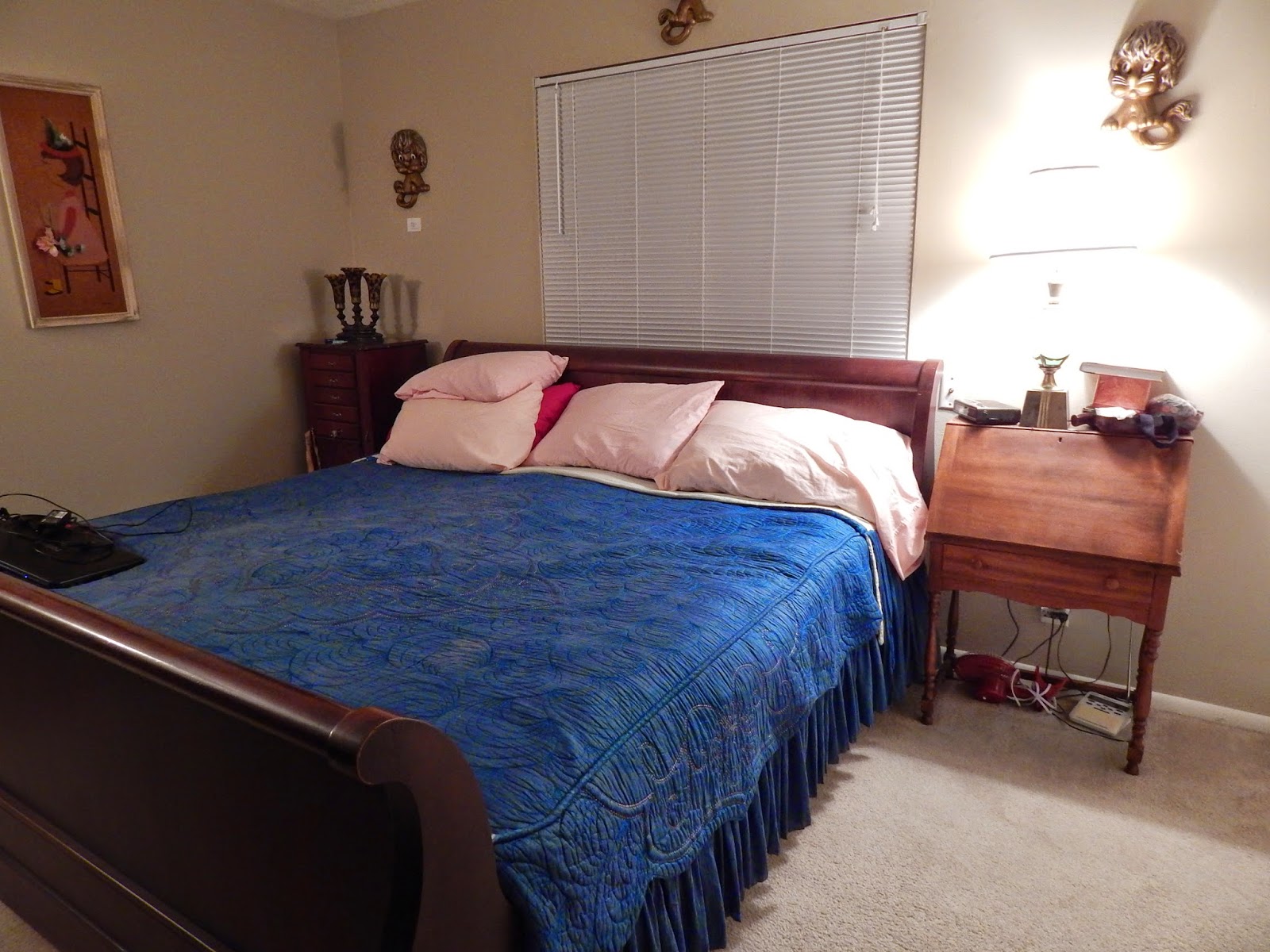 Yep. Almost two years and I *still* haven't put up curtains in the bedroom. I've done Danny's room, and the rest of the house but I still haven't been able to settle on anything I like. The creepy HOMCO wall lions want curtains. Tomorrow I am going through the fabric stash, and making curtains out of the first thing I can find that doesn't look stupid. Fine, "doesn't look too stupid." Enough is enough already.

Yum. This post is a buffet of food for thought for fellow sufferers of cabin fever.

Beginning with the fruit -- that Grecian plate is probably a cigar ashtray. Those crisp graphics are a nice background for those luscious Chilean plums. And thanks for the tip, I'll watch for them at the market.

Have I missed your review of a Yesterday's Perfume "Antilope" by Weil? As a child I was thrilled when the sophisticated salesladies at a famous department store let me sniff it (while my mum was purchasing Charles of the Ritz Revenescence). It did NOT smell like my grandmother.

No mortal can repair snagged cobwebs, Goody. I'd wear that lovely blue gown as is, with an extra dab of pearl body polish on the shoulders and arms, and perhaps a silver gauze stole. Candlelight is kind to flaws.

The fastest window treatment I can devise is the Neo-Classical loops with swag. A chum of mine actually spray painted the rope rings from a kiddy ring toss game, duct taped them to the window frame, and pulled a bolt of fabric through them. Et voila!

I think the room looks clean and contemporary as is, actually, but one understands the urge for change. Have fun!

The only Weil perfume I am familiar with personally is Secret of Venus, which is OK but not a fragrance that was going to change my life or anything. I understand people are kind of obsessive about it. Antilope was a fur fragrance originally, I think as were most of their perfumes. I haven't tried it, but I'm sure I'll get to it sooner or later.

Is it just my dirty mind, or did I spot a bit of buggery going on with the characters on the plate? Oh goodness, how could I have missed that?

I was a bit worried at first that those might be *all* your perfumes - I was sure you had to have more than that. I don't have a lot of 'drugstore' perfumes, though the few I've got, I'm very fond of. (Guilty pleasure: Star Trek Pon Farr. It is honestly better than people expect it to be!) I also have a forgotten Jovan, Pagan, which was the first perfume I ever really liked. I stocked up aged 16. If only I'd thought to do the same when I discovered Mitsouko in the 1990s... Take us on a tour of your collection!

Jovan Pagan is a new one to me-never heard of it, and I thought I knew my Jovan rather well. I wonder if they just couldn't sell it in the US with that name because the religious nutters would be up in arms? Name a fragrance, "Sex Appeal"? Sure. "Pagan"? Oh, that's just too much...think of the children!

I wish I'd stocked up on Mitsouko too. And Byzance-not because I liked it (I didn't) but because it sells for absurd amounts of money now.

Despite the balmy weather we've been having for 2 weeks now here (75F !!!) a BRUTAL hailstorm that lasted 45 minutes knocked every blossom off my mystery plum trees yesterday. So no plums this year AGAIN.
Hmm..... I have a similar silver tray for the most frequented members of my perfume collection, (although your tray is remarkably dustless compared to mine.) I almost thought that purple bottle was Lolita Lempicka, that 90's icon. What is in the tall, frosted bottle next to the purple one?

The frosted bottle is Bat Sheba by Judith Muller. It is like Woodstock in a bottle (patchouli, sandalwood, rosewood, etc.). I didn't pay attention when I bid on this bottle thinking it was the small 1 ounce size. Imagine my shock when the gigantic bottle arrived. It was good value, but a little Bat Sheba goes a loooong way! I figure I'm set for life now. It was created in the 60's, and it smells it. In a good way, but in very small doses.