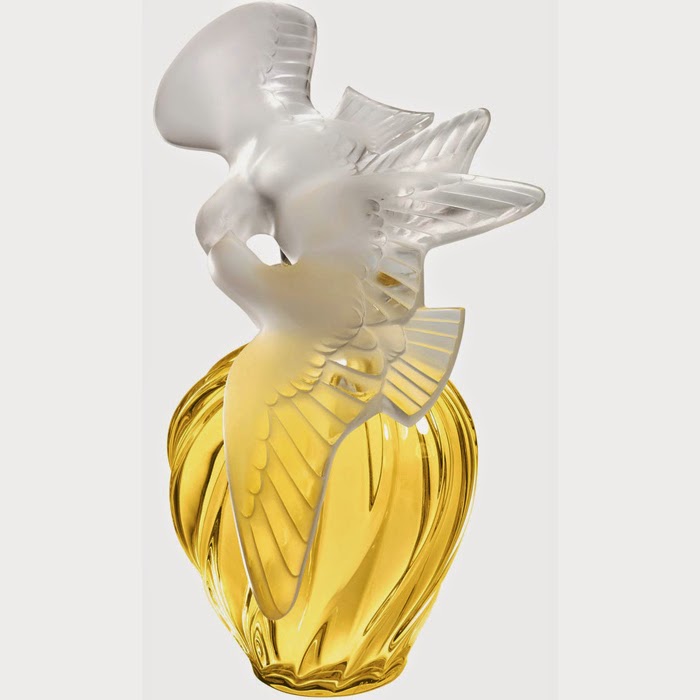 If you've been in a public space in the past fifty years or so, you know this fragrance. Your mother (and your grandmother) probably had the beautiful Lalique bottle displayed on their perfume tray. I never felt the need to sneak a whiff of the perfume directly from the bottle as it was worn (lavishly) on every form of public transport, in every dining establishment from cafeterias to upscale restaurants, in classrooms, hospitals, newsstands, and anywhere else people might gather. It would have been a bit much except that it always smelled so good on your mother and grandmother.

The new formula has been toned down a bit. Unlike many reviewers I don't think this is a bad thing. The carnation note is still dominant, and seems to live in the top, middle, and base, but the other florals have receded-a good thing if jasmine, iris, and rose aren't your thing. By muting the competing florals, the spiciness of the amber, vetiver, and cedar combine with the carnation into something I can enjoy without feeling like I'm wearing a cross between a funeral parlour and the corner florist shop. I suppose that's why I've always loved carnation fragrances-they're floral, but in that peppery way that saves you from too many associations. For years I used Roger and Gallet carnation soap, until it was discontinued in the US. There's carnation fragrances, and then there's carnation fragrances with everything else in the perfumer's arsenal tossed in. If you've ever smelled the long-gone vintage Guerlain Ouilette, you know what a serious carnation scent can be. L'Air du Temps was never going to be Guerlain Ouilette, but once they subdued those screaming jasmine and white floral notes, it became for me, a much more wearable scent. I know people love the vintage L'Air du Temps formulation, but unless it was on mother, it was never going to be anything more than a pedestrian perfume to me. Like a top 40 song that gets played in endless rotation, L'Air du Temps is the Bee Gees of the perfume world. You know all the words, and haven't forgotten them long after the fad was gone, but you wouldn't listen to it by choice.

I figured the best test of something like L'Air du Temps would be a long ride by motorcar. Before leaving the house, I applied it 1960's style (generously) and then applied some to a handkerchief for my handbag. Thing is, twenty minutes into any trip, I get a little hungry. I'd guess this is a holdover from childhood motion sickness when my mother would hand me a bag of salty pretzels to suck on as a sort of folk remedy for nausea (because it couldn't have been anything to do with being trapped in a car with three smokers and closed windows). I'm a terrible passenger. Oh, I'm fine if I'm driving, but put me in the passenger seat and the waves of nausea start rolling before I'm half a mile from home. So yeah, I wasn't driving, but I'd brought along several pieces of cubed cheese, iced coffee, and a gigantic packet of sour cream and onion Lay's. Try as I might, for the remainder of the ride all I could smell was coffee and fake scallion/chive scent. Poor L'Air du Temps just couldn't compete. I tried some the next day without the fake onion scent and it was a different world. Some scents are nice together-Chanel #5 with bourbon and ginger ale, Tabu with a slice of Christmas Cake, Tigress and Alba dietetic "milkshakes".Sadly, the onion scent on potato crisps will never mingle with a fragrance. Not nicely, anyway.

My only complaint is that it fades too quickly. I don't re-apply cosmetics, so I surely won't be carrying a perfume bottle along for touch ups, even a pretty one. After an hour it was 50% gone. By three hours I couldn't detect it on my skin, though it lingered a bit longer on the hankie. That's a shame as I feel the notes never get a chance to fully develop. I wonder if what people dislike about the newer formulation is that it lacks the slow opening of the old formula. What I find irritating is how everything is there right at the start-you get the whole show at once. The top, middle and base smell identical to me. It has everything I enjoy, but like sour cream and onion Lays on a long road trip-it is nice to save something for later. L'Air du Temps consumes the whole packet in the first hour.

Some fragrances would be better lost than reformulated (Mitsouko comes to mind, as does Fidji) but others like Opium and L'Air du Temps have (to my nose anyway) become more wearable. Sadly, it isn't 1977, and you can't go out in public places wearing a noticeable scent that smells of anything stronger than laundry detergent or a fairy cake. Personally, I don't give a rat's ass about what's fashionable, but I do try to avoid wearing things that would be challenging to a modern American's senses if I plan to be in a public space. If I need to be in a Dr's office or hospital setting I just skip it altogether though I think Castille soap, or camphor are a whole hell of a lot more headache inducing than anything on my perfume tray. I don't think any reasonable person would find L'Air du Temps offensive either in the old or new formulation. It is like a hug from your mother-well, your mother anyway as mine wasn't terribly demonstrative that way. It is familiar, comforting, and easy to wear-but buy the purse spray because you will be reapplying every half an hour.

Goody, you make an exceedingly pertinent point about scent and associations: some florals remind one of ladies who lunch wearing Republican hats. (NOT The Style Crone, should she see this comment!) Tabu was the fragrance of an aunt who strongly resembled the Duchess of Windsor. White Rose was worn by a grand-aunt who dosed a dainty hankie with it, and popped the hankie down her corsage when attending non-air conditioned churches. Chanel 21 wafted through the offices when Selectrics were new, and Charlie took it place alongside the new word-processors.

And I was recently complimented on my own selection for a trip to the shoppes -- Febreeze, for those who live with cats. (It's usually 4711, which I find at dollar stores for $3/.)

Shanghai? As worn by Clara Bow or Rita (Cansino) Hayworth. No! Ida Lupino!

If you really want a blast of 'white flowers' (and aldehydes up the wazoo) try Fleurissimo by Creed. It was commissioned by Prince Rainier for Grace Kelly & presented to her on their wedding day. It's a bit too formal for my tastes & I truly wonder if Princess Grace ever wore it (other than on her wedding day).
Creed also makes a great Vetiver.
You've got me all inspired to go through my perfume collection! I worked the fragrance counter in the early 90's at Nordstrom's in Marin while going to university. Back then Nordstrom's used to actually train fragrance counter reps quite well (but they certainly didn't pay well - hoorah! for the employee discount though).
My collection is a bit heavy on the 'gourmands' as that was the thing in early 90's along with over plucked brows, grunge & the tediously bland Kate Moss. That reminds me, ever tried Creed's "Spring Flower' 2006? The name & the bottle are regrettable, but supposedly it was Audrey Hepburn's signature scent & one of my favorites.

I've never tried L'Air du Temps, will have to give it a whirl. My godmother has the Lalique bottle.

My own favourite carnation is - was - Caron Bellodgia; my own bottle is of the last version, and that was pretty neutered compared to earlier ones. Bloody regulations banning the stuff that gave carnation scents their spice... *Mutters*

@Beth Waltz
"Febreeze" made me laugh so hard I think I pulled something! It does however illustrate my point that you can't sell a fragrance in America unless it smells, "Clean" like soap or laundry detergent (or like cupcakes).
the dollar store sells 4711?! I LOVED that stuff when I was young (you had to get it at this German deli/import shop in Chicago, which was a special trip to the North Side, but then we got to stop at the bakery down the street that sold mohn strudel so it was worth the trip). I have to check my dollar store-I'm so excited now. And I want strudel...and a bottle of Asbach ;)

@Bibi
I wanted Fleurissimo in the worst way (all the hype, I'm sure and the ads in Vogue)but when I finally smelled it, I hated it. I haven't smelled Spring Flower" so maybe that should go on the decant purchase list. Nordstrom's had a great cosmetics department back then-no one else was selling Laszlo skin care in the Chicago area. I used to stock up on mud soap on visits home.

@Mim
Caron's perfumes are (mostly) wonderful, but I haven't tried that one (on the list it goes!).

Youth Dew and Emeraude were my grandmother's perfumes. My grandparents' Cadillac smelled like Emeraude, pipe tobacco, and a faint whiff of collie.

Another of our weird commonalities: I suffered horribly from carsickness as a child (I had saltines instead of pretzels). I still get ill when it's raining and I'm in a car with the heater on.

Emeraude is one of my favourites (I stockpiled three large bottles figuring they would reformulate it, and I was correct. I now have enough to last until I die).

You didn't throw up in your grandparents' Caddy, did you?

My grandparents always pulled over in time for me to be ill by the roadside, thank goodness.