I'm a bit surprised at all the fuss made about this re-issued Guerlain fragrance from 1901. I secured a generous decant expecting I'd be blown away by it. I'm not. There isn't anything wrong with it, and I don't actively dislike it, but I don't understand all the fuss either. There's iris and violet, and a tiny bit of sandalwood. The notes list narcissus and ylang ylang, but I don't smell those at all. It reminds me a little of the dry shampoo I used to buy in the 70's. 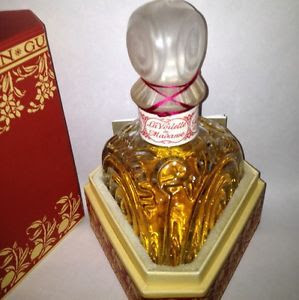 I've seen reviews describing Voilette de Madame as "dirty", and I really don't detect that at all. If anything, it smells slightly antiseptic, yet dry-like my grade six science teacher's classroom that always had the smell of rubbing alcohol and the strange dusty/burning odour that filled the room each time she fired-up the ancient transparency machine that probably had so much dirt on the inner lightbulb that no lecture, of any length would be enough time to burn it all off. Voilette de Madame smells like Earth Science. Mostly science. Mrs. Bass could have rocked the hell out of Voilette de Madame.

I can't know what the original would have smelled like, but in this re-issued formulation, it isn't terribly exciting. Nice, yes. We all like nice sometimes, but this is very expensive, "nice." Unless you're a Guerlain fan and must experience it, I can't recommend splashing out on something this uninteresting. There are better violet/iris fragrances available if you're looking for something wearable. If you're looking for a perfume history lesson, then perhaps Voilette de Madame makes more sense.

The silage is almost nothing-if you turn your head, you'll miss it. The longevity isn't much either-a couple hours tops.

I suspect there's just some fragrances that require a time and place to work properly. 2015 in Omaha, Nebraska isn't able to provide Voilette de Madame whatever it requires.

I really do wonder if it is worth trying to resurrect these turn-of-the-century perfumes with what modern perfumery has available per regulations. Sure, I can get an "idea" of what it was like, but so what? I'm only catching a glimpse, and leaving my brain to fill in the blanks seems terribly cruel. I understand the desire to feel connected to the past, particularly with a house like Guerlain, but at some point it does start to feel like a way for them to make money. Guerlain already has ways to make money with things people want to buy and wear. Offering up an olfactory history lesson in the guise of a "reissued" classic is a bit silly. It isn't so much a reissue as a re-imagining with modern materials. Is it "close" to the original? I don't have any way to know, and neither does anyone else so for all that, it might as well be a completely new perfume without relying on the mystery afforded it by age.

I used to think flankers were the worst thing about modern perfume marketing, but perhaps the reissuing of fragrances gone so long no one missed them is worse. I wouldn't hesitate to pry open a 100 year old bottle of perfume to smell it in whatever state of decomposition it survived, but I do hesitate with re-issues. My bias of course, and if I miss out on something magical, well then there's more for the adventurous. I know I'll continue to buy re-issues from time to time, but I really am trying to avoid making a habit of it. There's only so much space in the fridge to store decants.

"Tis the season to remember My Sin as a decadent delight to be sniffed at the expensive fragrance counter in that long-ago world of grand department stores. We giggling teens suspected this was what women who wore cocktail dresses and stockings with seams expected from their well-heeled Santas.

The Violette fragrance was for old ladies to sprinkle on their lace trimmed hankies, but I remember it as being astringent, almost like a sniff of lavender in the flower bed. (I'm probably confusing Guerlain with a Casswell-Massey product.)

In my experience (and my degree was a B.S. earned when the chart of elements still fit on the back of a classroom door), earth science classrooms smelled strongly of aftershave and canvas bags, and Indiana muck and limestone. Although you certainly brought back a vivid memory of the smoke from a dusty projector...!

Well, at least the bottle is pretty.
Speaking of pretty bottles I found Jeanne Arthes' Guipure in Silk at our local departmental store. It's supposed to be a knockoff of Hypnotic Poison. The box & the bottle are fab. It looks like something Morticia Addams would have on her vanity. As the name would suggest the top of the bottle & cap are covered with black guipure lace, very Goth looking. The box continues this theme with a die cut black guipure lace cardboard insert to hold the bottle inside & more guipure lace printed on the outside. The juice, it sort of smells like HP, but not as sweet. I get a wan coconut, sweet almond, vanilla, & hairspray musk thing with some vague floral notes floating over it. If you know a teen who's into all things Goth it'd make a great gift. Do kids even do Goth nowadays?

Someone at Jeanne Arthes really has a lot of time on their hands designing all these boxes & bottles. Too bad they don't put as much effort into the juice that's in them.

@Beth
I used to tease my sister that she had an easier time memorising the periodic table because there were less elements when she was at school. My Sin is really a remarkable perfume, and the old vintage bottle would have been a beautiful gift.

@Bibi
The Arthes bottles are fun. I dunno, for the money the fragrances aren't bad, though I've never tried the two you've mentioned. We still have goth kids in Omaha, but we're probably thirty years behind the times.

I'd be all in favour of reissues if they could smell like the originals, but modern regulation makes that impossible in so many cases, so I wish things would just be left to history in that case. It was interesting sniffing the 'original formula' domes in Guerlain's Champs-Elysees store, as some worked very well (Mitsouko extrait) and some simply didn't (L'Heure Bleu). I was chuffed to hear about the Patou reissues, but apparently they don't really match up either, so I'm stuck with eking out the three bottles I have.

@Mim
My understanding is that the regulations determine where the perfumes can be sold, so in theory, they could still be produced, but the sales could only be in very few markets were the regulations aren't in place, which wouldn't be cost effective.

And yet, we still sell vinyl and plastics in the US that do a whole hell of a lot more harm than oakmoss ever did. Go figure.