We woke to this: 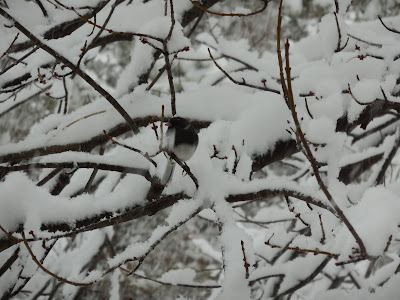 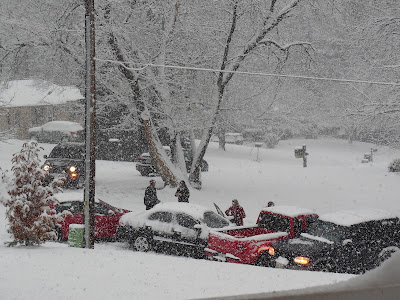 There are reports that Dodge Street (one street over from us) is completely blocked with over 100 cars stuck. They can't plough until they tow all the cars. There's thick ice beneath the snow. Merry Christmas! Mr. ETB is stuck at work (he left around 5 AM) but at least he didn't try driving. At the moment buses can't get through as roads are clogged with abandoned cars.

We live at the very top of a steep hill. Cars seem to do OK getting down it, but up is impossible. We've been seeing a steady stream of people walking through our complex trying to get to a bus-stop on foot, but most give up and return to their cars. The college is all but abandoned this time of year, so there isn't even a good place to wait it out. If this keeps going, I'm just going to invite people in for coffee. What the hell, it's Christmas.

I shot some video earlier:
I'm getting a bit nervous watching the snow build up on the power lines, but hopefully we won't be in the dark. This has been a strange storm-almost no wind, so it is falling straight down. At our house we have about 6 in already with no end in sight.

I wonder how many of those hundreds of accidents they're reporting were because some fool was trying to use a mobile whilst driving? Me? I drive with my fists clenched firmly around the steering wheel and 10 and 2 like a proper old lady. I'm really glad I don't need to be out in this. I watched my neighbour start to leave for work, then turn around and come back. When they say the roads are impassable-they mean it!

This is all Danny's fault! He was hoping for snow so he could use his snowshoes. Thanks a lot, kid!
Posted by Goody at 8:46 AM
Labels: Christmas, Omaha, Snow

Look at all that SNOW!!! Well we awoke to rain, but apparently it will clear. Bloody well better because we want to go to the beach!! Have a lovely Christmas with the Mr and Danny, and the squirrel of course.

Ooo purty! Squeee!!!
The power came back somewhat intermittently last night about 9pm. I was beginning to wonder if another ultra leftist group took over the hydroelectric plants like they did the cable tv providers 2 weeks ago.
It's a sunny, mild 57F here today with a predicted low of 45F.
I'm a granny driver too.
Merry Xmas and best wishes for a new year filled with peace and happiness!

@Sue
And a very happy Christmas to you and yours!

@Bibi
Merry Christmas to you! I hope the New year sees an end to all the border disputes so life can get back to normal.

Bless you all, and stay safely inside! I learned to drive on icy parking lots in an over-powered front-wheel drive Ford. My father, a one-time race driver, counseled: "Steer! Und keep dat fat foot off dat brake!" He believed that (with the notable exception of my mother)no females could keep their brains focused on winter driving conditions: "Stoopid! Watch those silly vemin und remember the dirt ist better than the street." Papa strongly recommended driving with the passenger side wheels on the rough shoulder for better traction on glare ice. Ja, wohl, mein papa!

@Mim
We're expecting another 10 inches of the stuff Monday!

@Beth
I agree with your dad about frozen shoulder driving-until it starts to thaw even the tiniest bit because then you need someone to come and push you out of the mud.

I will say that the weather has brought out the kindness in people-the handyman shoveled me a path to my car, right up to the door. He really didn't need to do that, and I'm really touched that he took the time to do it.