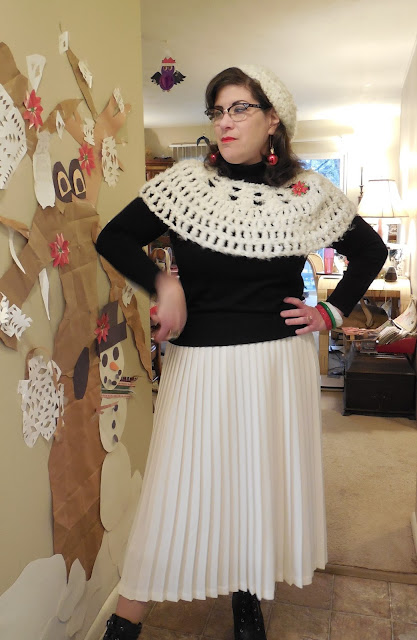 The Midwestern states are experiencing weather better suited to spring today. I think Mother Nature is on the naughty list because as I type, she's taking aim at Santa Claus, Indiana! I mean, I understand that some people loathe the holidays, but come on. You keep safe out there, Beth.

Iowa is having tornado watches-we haven't had any issued yet in Nebraska, but it has been strange here. Around midday, the rain turned to snow as the temperature appeared to be going up, before converting back to slush, and then rain. Obviously, I wasn't expecting any of that as I chose today to wear a white skirt. Duh. This was also the day I discovered my new boots aren't waterproof. What the hell? This is why I don't buy new things. I have boots that are over 40 years old that don't leak, but the ones I bought new this year can't take a couple inches of rain. I'm tempted to take them back-K Mart is good about returns for faulty items. Boots really ought to be sewn in such a way that they don't leak. Grrr.

We took a drive last evening to look at some of the holiday lights around town. We found one neighbourhood where everyone on the street participated and they turned it into a sort of North Pole wonderland. Because it was warm, families were able to get out and walk the area which is largely unheard of in Omaha come December. The lights were coordinated with music, which was a nice touch. Even my humbug of a husband had to admit he was impressed even if he declared it all, "A bit much, don't you think?" We saw bus tours stopping by to have a look as well.

I took Danny to the garden centre today to deliver a jar of jam to an employee he's formed a friendship with. Over the past couple of years she's spent so much time with him offering gardening advice, and discussing various insects and birds. She was taking the day off having her hair done, so we left it in the care of the office with a note thanking her for all her wonderful guidance through the year. Danny attended a canning seminar they offered last spring, so it was nice to be able to return with something interesting that he preserved (cherry/rosewater jelly). With that stop out of the way, we were done with everything that needed doing. Naturally, we took that as a sign that we should go out and buy cheese. You don't want to be caught short of cheese this time of year.

Seduced by the beautiful produce at Bag and Save, I loaded up on apples and citrus as well. I know everything is season-less these days, but getting oranges at Christmas in Chicago in the 60's and 70's was still a big deal. I remember one year my dad won a bag of grapefruit from Texas and it seemed so exotic that you could send them all the way to Chicago. Then again, I still consider fresh pineapple a treat although it is readily available year round from Costa Rica. I might have gone overboard buying oranges, but at least no one will be suffering scurvy in the new year. 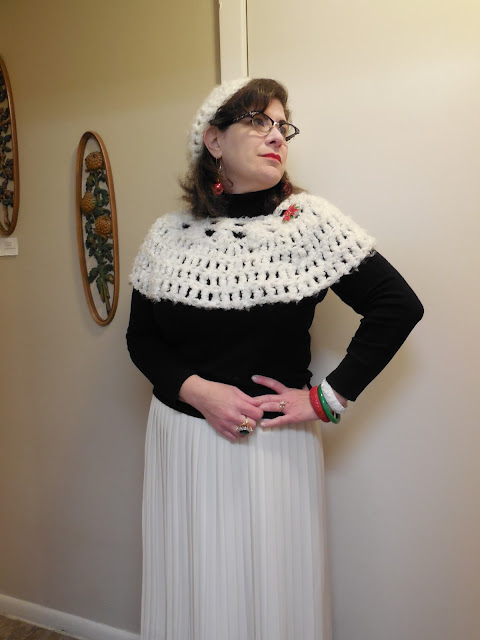 Want to hear something stupid?
I went to snap the cap back on the canister of hairspray and it caught part of the flesh on my finger, clamping it shut. That would have been bad enough, but I then had to try and pry the lid off with my non-dominant hand and get it removed without tearing all the skin off my finger. I finally got it, and although I have a gigantic blister and bruise, it didn't break the skin. I binned the cap. At my age, I can't risk losing a finger to hairspray. You're probably wondering if I feel old and pathetic. Yes. Yes, I do.

If you're in the path of the crazy weather tonight, keep safe and check the batteries in the torch. I recently purchased a new weather radio, but I really didn't expect to be needing it at the end of December.

I'm sitting here in the dark running the computer on the invertor. Apparently all of Nepal lost power for some unknown reason about 5 hrs ago. They're rationing cooking gas, petrol, diesel & kerosene as the border blockade continues into its 3rd month.
At least we have nice weather?

I bought a raincoat at Walmart in Florida & it leaks too. WTH is the point of a raincoat that leaks? I'll be buying my next raincoat from Norm Thompson or LLBean, I suppose.

Would you believe I first read that title as "Tomatoes, in December?" ? Which I took to mean, outside tomatoes. Not being from tornado country myself, I don't know which would seem odder to you..

@Radostin
Given the weather we've been having, I'd say neither-I just harvested butter lettuces in December!

Growing up in an ancient farmhouse with an unheated second story, we kids faced the annual ritual of spreading clean newspapers on the floor of the unused north bedroom, accompanying Dad in the little red farm pickup to the feed store, where we loaded the boxes of fresh grapefruit! into the truck, trekked back to the house, hauled the boxes up the very narrow, very steep stairs; and spread the wonderfully fragrant fruit on the newspapers.

Another ritual was the wax debate: Mum did not feel it necessary to apply a daub of plumber's candle wax to the stem ends. Other mums thought it essential.

@Beth
It was a terrible realisation when we moved to a farmhouse in the country that the heat didn't go upstairs! I very nearly insisted we move back to Boston. The room over the kitchen wasn't horrible, but wow-you must be made of really tough stuff having grown up sleeping in a room that cold.

Running out of cheese is the stuff of my nightmares. The kittens got me a whole truckle of made-in-Cheddar cheddar (still with its fabric wrapping on) so I've been enjoying that.

The whole world's weather appears to have gone loopy...

@Mim
You have thoughtful kittens!