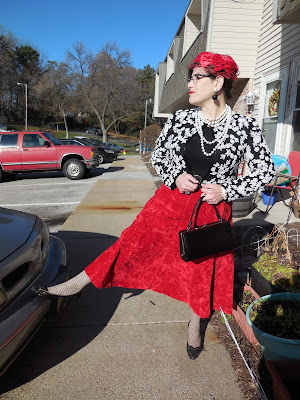 Tonight is St. Nicholas Night, and it is also the first night of Hanukkah. If you leave a vintage shoe on your windowsill, you wake up in the morning to find it filled with dreidels and candy. Well, I've got the shoe... 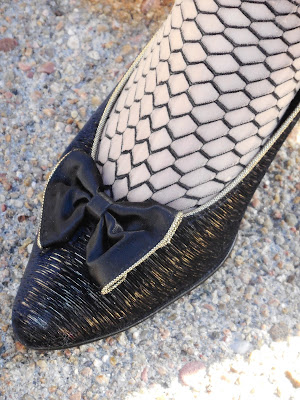 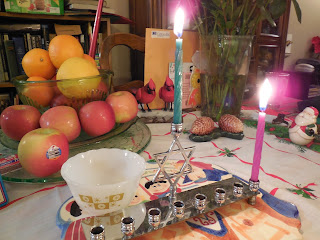 We lit the menorah, 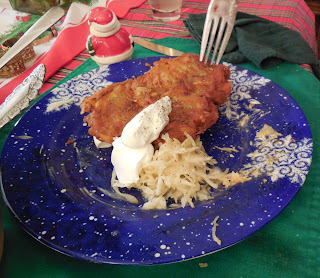 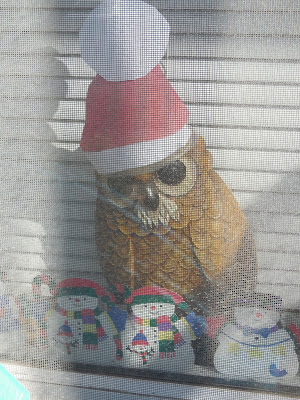 "Hrumph. I didn't get any potato pancakes."
Don't mind Owly-he's just grumpy because we stuck him in the window wearing a Santa hat.

I let the boys talk me into experimenting with some of the potato pancakes. Remember how KFC was selling sandwiches that didn't have bread, but used two pieces of fried chicken instead? I took that idea and made vegetarian Reuben sandwiches between two potato pancakes. I used a "Tofurky" brand lunchmeat to stand-in for the corned beef, and then added sauerkraut, cheese, and French dressing. They both enjoyed it (I don't get along with fried food, so I sat this one out) and thought I should do it again next year. I had to wrap the sandwiches in greaseproof paper otherwise they'd be too messy to handle, but I'll bet I could sell these for a few dollars each at the Farmer's Market. I really ought to look into it. Unfortunately, they scarfed them down so quick I only had plain potato pancakes to photograph-but I'm sure you get the idea.


Danny wore his new Centipede shirt to play the arcade game at Broncos today.  I think it turned out nicely (ignore where he spilled water down the front earlier). The colours are very bright in person. I'd never worked with the puffy-paint in a tube before save for some glittery stuff I used on shoes in the 80's. It was easy to control, and didn't leak. I see some custom shirts in my future as there's still plenty of paint left. 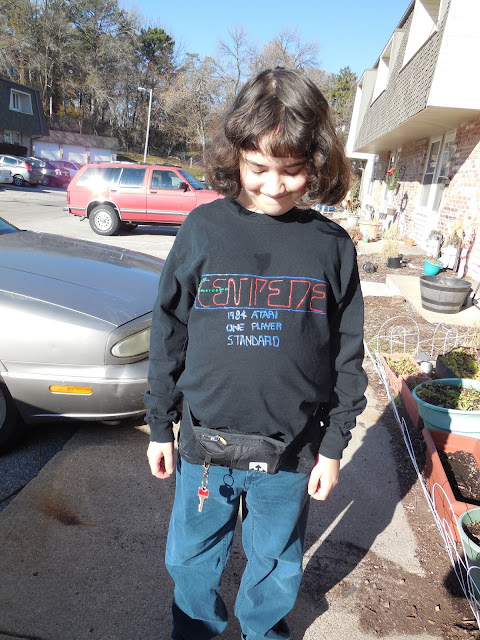 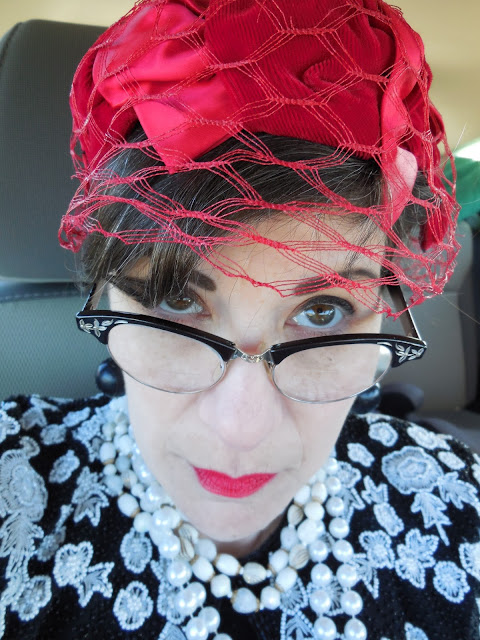 There aren't that many opportunities to wear a hat like this during the year, so I try to get as much wear as possible during December. That's one damn festive hat. 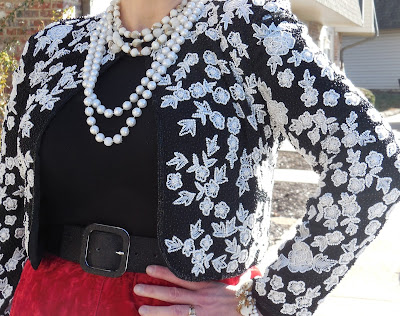 I keep forgetting that beaded jackets are heavy. By the end of the day, I really feel like I've had a workout. 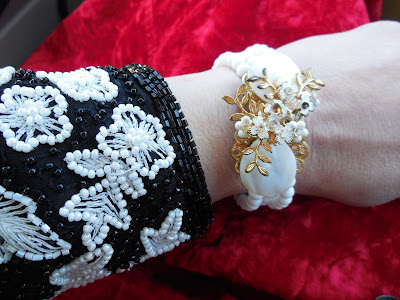 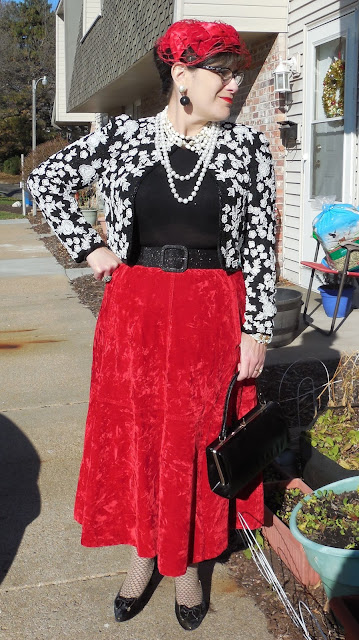 I hope you had a nice weekend, and that the week ahead treats you well. If all else fails, wear a silly hat-it will make you feel better.

Oooh, swish outfit! I thought the beading was lace till I saw the closeups.

I'd buy one of those sandwiches, they sound delicious. (Mmm, fried things...)

Happy Hanukkah!
I'm baking zimtsterne for St. Nic's.
That is one seriously snazzy outfit!
Love that milk glass bracelet.
What lippy is that? it looks fab!
Speaking of silly head gear, I wore my Khaleeji hijab set for the 1st time yesterday. It is now fashionable in the UAE to pad one's hijab so it looks like you have a massive bun atop your head under the thing. The Sheikh said it looked like a Sikh turban. Pfft!

I would wear that hat to midnight Mass on Christmas Eve.

Excellent brow work. You're on fleek, as the kids say.

Thanks for the close-ups! Otherwise, I'd have admired your ensemble from afar and missed all those gorgeous tactile links: the crushed velvet of the skirt with the plush of the hat, the net of the veiling with the textured hosiery, the beading of the jacket with the sculpture of the bracelet -- and even the floral detail of your specs! (Nah, had we met on the street, I'd have recognized a kindred spirit and trotted up to ask for details.)

Those fabric paints in a tube work well for instant "team shirts" and door banners, I've found. Much! cheaper than hiring custom printing.

Happy Hanukkah! Hot black coffee and a Rueben sandwich -- inspiration for lunch on a chilly day!

@Mim
Well come on over, I'll get you a plate.

@Bibi
I "Think" it was Certainly Red, but I layered it over lip pencil.

@Propagatrix
I'm completely serious-if you'd like to borrow it, I can pop it in the mail to you. I don't have head cooties or anything ;)

@Beth
OK, I'll make some Team shirts. Maybe team, "Get Off My Lawn!" I shouldn't have trouble recruiting.

Oh my gosh. I would absolutely gobble up a latke tofurkey Reuben!! Yum! I think you've got something there. And if it was made by a beautiful girl in a beaded jacket and festive hat then it would be a PARTY! Happy Hanukkah!!!

@Connie
I must confess-I wore a crappy old flannel shirt to fry the latekes ;)

@Connie
Are you trying to give me self-esteem or something my parents beat out of me by the time I was two?! Can I come live with you?

Looooooove that outfit on you! The hat and lippy are very seasonal and the beaded jacket is divine. I always look at beaded jackets and put them back because of the weight, I weigh enough without a beaded jacket on top!!

@Sue
Try a beaded waistcoat?
I was seriously sore by the end of the day from carrying around all those beads.