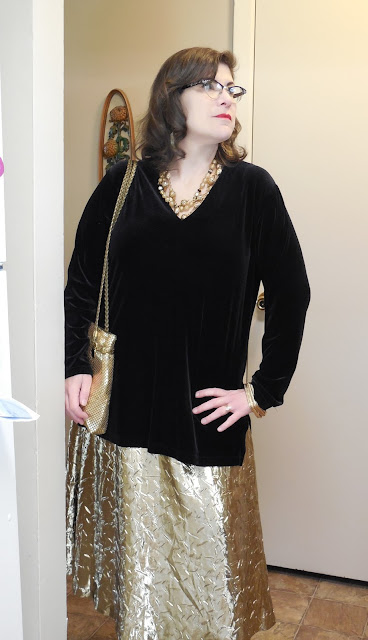 My first attempt at getting dressed this morning had this skirt paired with a slinky wrap top held together at the waist with a gigantic rhinestone buckle.
"That's too disco for the library" I was informed. Sadly, I knew that was correct, so I went with a long velvet top instead. Is it my fault that there aren't any discos left in Omaha? The Halston just wants to thrive in a proper environment, but all I can offer is the Friends of the Library book sale in the basement of the Swanson branch. 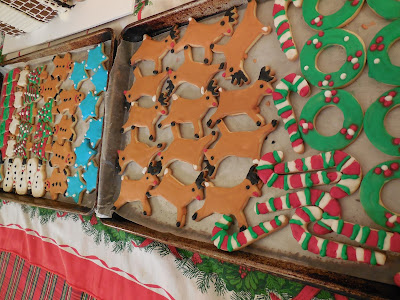 The meringue powder I previously used has gone out of production, so I used fresh, pasturised egg whites instead. I have to admit, the colour, texture, and taste is much better. Price-wise, it isn't that different, but the whites don't have the same shelf-life and can't be used for meringues or anything requiring whipping. I'll freeze what's left and use it for baking, but I'm very pleased with the results. 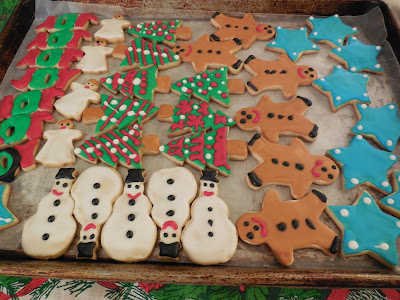 The fish-shaped cookies for the state park are done, and I'll drop them by tomorrow. I was happy with how well the templates I made worked for cutting them out, and I only had a couple break in the baking. With so many fins, it just seemed like there would be more to get broken. The food colouring felt-tip pens make fine details a snap. 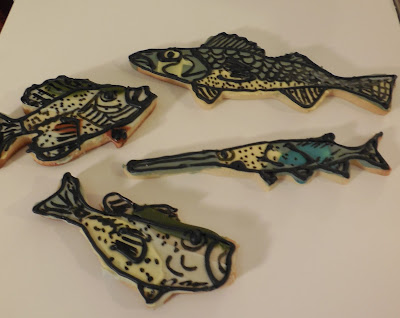 "It is pronounced, croppy. I don't deserve this abuse." 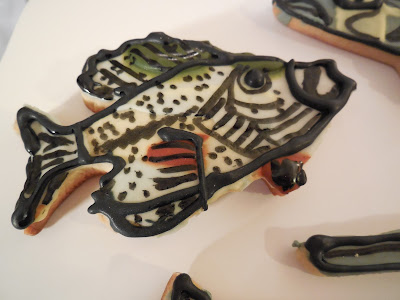 I couldn't find a bait box I liked, so I made one out of a candy box and some twine. It is filled with gummy worm candy. 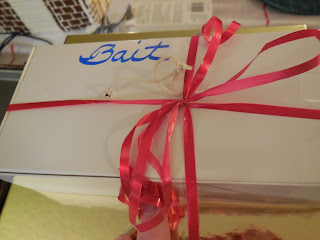 And there's the finished presentation. I sure hope they like it-I had fun making them. 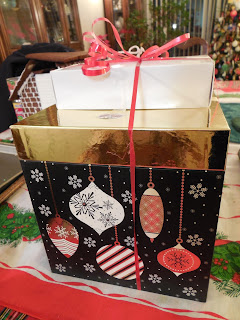 Almost as much fun as wearing gold lame Halston to the library. 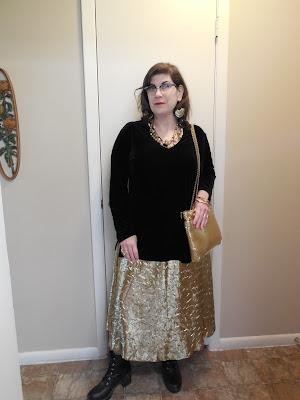 Outfit Particulars:
Velvet top-bought it new, early 90's at Jordan Marsh
Vintage necklaces-both Hand-Me-Ups
Earrings-K Mart
Boots-K Mart
Vintage handbag-Goodwill (?)
Lippy-Revlon 5th Avenue Red
Fragrance-Alfred Sung (meh) I know, I should have worn Halston, but that was too obvious.
Not shown-a motorcycle jacket because it was freezing outside this morning. 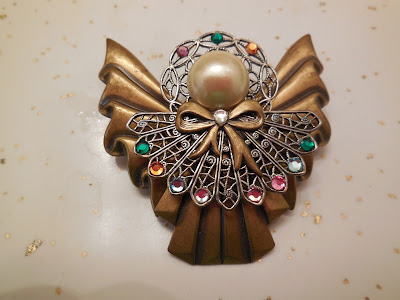 I stuck my vintage angel pin on the jacket because I like the absurdity of a sparkly brooch with a biker jacket. 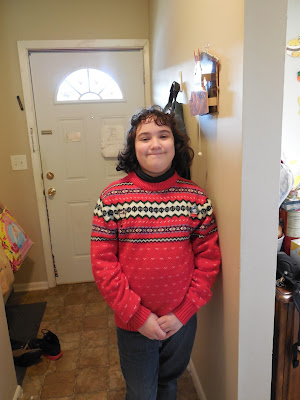 Can I tell you what this kid did? We were listening to the Christmas station on the radio (they play all Christmas music from Thanksgiving until New year's) when some country/western version of Silent Night came on. Danny stops, looks at me, and in his very best Larry the Cable Guy impersonation yells, "Hee Haw, Santa's bringin' me a tax cut for Christmas!"

Sometimes I forget that he's from here, and "gets" the local ideological landscape in ways I never could. It was hilarious, but it wouldn't have been funny if someone from New York said it. That was enough of the radio for me, so I did something I might regret by the time Christmas is over-I brought out my copy of Alvin and the Chipmunks Christmas. I remember my mother buying it for me along with that other Chipmunks classic, Chipmunks A Go-Go.  I still have that one too. I don't think I'm overstating it to say he was completely stunned by it. Since he enjoyed that so much, I'll have to dig out my Snoopy and the Red Baron record as well. I knew there was a reason I've been dragging my record collection around all these years-eventually someone would appreciate my taste in music. Don't you worry-there's still a place for the Andy Williams Christmas record as well. I just can't take the top-40 Christmas music they play on the radio, though I did come up with some novel new lyrics for Last Christmas, after hearing it for the millionth time. Danny thinks it sounds too hostile. Obviously, he's never been dumped at Christmas.

On the way back from the library, a warning light came on in the car indicating I had low air pressure. I looked them over and couldn't see anything (and I didn't have a gauge with me) so I stopped at the garage up the street to see what they thought. The loveliest man, tattooed top-to-bottom and looking otherwise terrifying but with the sweetest demeanor of anyone I've run across in Nebraska, checked it out and determined that the cold had sapped them of air-not much, but the computer reads it across four wheels so if the overall weight is over five pounds, the warning light comes on. That's the new technology. He went ahead and over-inflated them slightly because it will be cold for the next few days, and that ought to take care of it. It was very nice of him, it didn't cost me a cent, and there's a lesson there about not judging a book by the cover. I can't imagine what he must have thought of me in a gold lame skirt and motorcycle jacket! 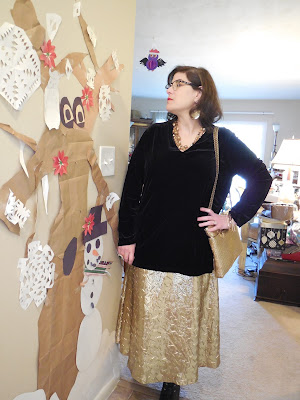 We've postponed Danny's hotel stay until after New Years because he's just too sick to be having a pool party away from home, and Mr. ETB is still sick as well. We'll still have a cake and party at home, but we'll take our weekend away once everyone is feeling better. To be honest, it reduces my stress right before Christmas and New Years, and I will appreciate the time off more the first week of January.

I don't know what I'm getting for Christmas, but I bought Mr. ETB a bottle of Drambuie, which was a lot more expensive than I remember it being (though I haven't bought a bottle in over 25 years, to be fair) and I also bought him a clapper. You can't say I'm not thoughtful. I'm envisioning getting drunk and clapping lights on and off all Christmas day. That's how you have middle-aged fun.

(Actually, our government seems so keen to get rid of libraries, I'm surprised they haven't turned them all into discos. They seem to think no-one needs proper librarians and everything can be done by volunteers. Because, you know, there are professional qualifications in Librarianship for no good reason...)

Anyway, you and your cookies look scrumptious, and I hope Danny and Mr ETB are feeling better in time for Christmas.

Some bloke should blow the whistle -- this woman is Going Over the Top! (A little WWI reference for Danny) The Halston is gloriously glamorous for a library event, dear Goody. The biker babe jacket with the festive broach undoubtedly gave it the common touch you've noted is favored in Omaha.

The traditional conveyances of calories are handsomely made, and the sub of egg whites for the meringue shall be noted. Many moons since I've used the stuff. But, ah, the fishes! They are works of art! And the bait box is a nice touch. Were I still in the local newspaper business, I'd have assigned a photojournalist to this story about a gift that looks good in close-ups. And the kid would have come back with your pix and crumbs all over him.

We do hope for a photo of Mr. ETB, sipping Drambuie whilst creating a light display for Christmas music with his clapper. Hope you all get well very soon!

@Mim
Our mayor came into office and first off tried shutting libraries. She found out rather quickly how much people value their libraries!

@Beth
About six years ago we had the experience of taking some candy down to the World Herald to be photographed for a Christmas article-so that was my brush with fame ;)

They were nice enough to give Danny a tour of the newsroom. Sadly, there's no longer any smoking and drinking (that we could see) but they did let him listen to the police scanner, which he found fascinating.

@Vix
Thanks for the well-wishes.
Our library is a welcoming place where people tend to do their own thing, I'm lucky to live where I do.

@Curtise
I can't reprint them...this is a G-rated blog ;)

Well no it isn't your fault that there are no Disco's but you could bring them back!!! I bet you would be disco ready in seconds, or milli seconds!! Your calories look fabulous and worthy of putting on some extra weight for, yum yum!! I am liking the sound of food colouring pens, how wicked are they!! Danny is the best, but then, just look at his mother, comes from a good gene pool.

Our first movie script will be AVENGING DISCO LIBRARIAN.

Those cookies are insane!!! You should be proud. And definitely worth a little disco dancing. I get the whole thing about recognizing localisms in your child. I'm not from Southern California but both of my kids speak like a couple of SoCal dudes, which of course they are, and it kinda blows my mind.

The pens come in a variety of colours, but you get what you pay for. The supermarket ones are junk-go for the stuff at craft stores. The only real trick to using them is making sure you have a smooth iced surface to write on-then it is just like playing with markers.

@Connie
I wonder how strange it must be for immigrant parents seeing their American kids. I imagine it must be a very strange experience.