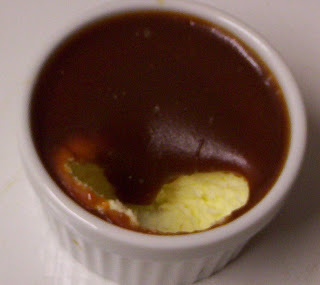 This is really, really good. So good in fact, that I think the recipe calls for individual ramekins to save us from ourselves (harder to make a pig of yourself as opposed to the "just a thin slice" that becomes half a cake technique). I fully intended to pig out on these but could only manage half a dish. It is very rice though surprisingly not all that sweet.

The recipe comes from Food And Wine, but I want you to get it from Cream Puffs In Venice, since she provided the recipe to Blogtopia.

I did not use the absurdly expensive salt called for in the recipe. Even if there were a discernible difference, I'd find it ideologically impossible to purchase it knowing people are eating out of dumpsters. I have to draw lines once in a while and Fleur de Pretension just isn't somewhere I'm willing to go. I used regular old sea-salt that I ground coarse (an adjustable grinder is a handy item. I bought one for spices rather than salt and find it works better (and it was cheaper-go figure).

Asa bonus, I had enough caramel sauce left over to pour on ice cream tomorrow.
Posted by Goody at 7:34 PM
Labels: Caramel, Cheesecake