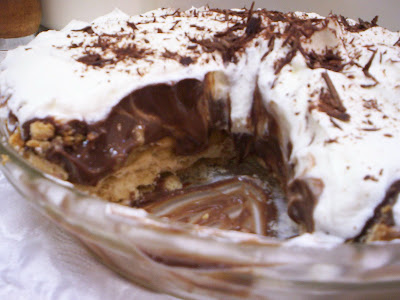 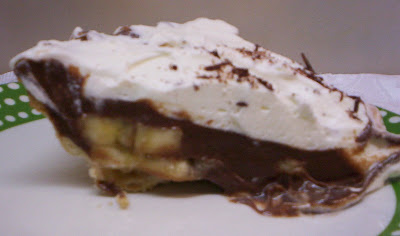 This is what you bake when you've been sick. Just when I thought I was better yet another wave of this crap hit me and I ended up at the hospital being treated for what they think was a migraine. By the way, it didn't help and it took two days to abate.

Anyway, I almost always make dessert on Friday and this was simple enough to throw together and I knew Danny would like it. Basically, it is the chocolate pudding recipe I always make thickened with a bit of flour and poured in a short paste crust. I told you it was easy. I was able to make it in stages (because heaven knows, I ain't up to standing on my feet very long) and the filling cooks in about five minutes.

(If you want to see a professional take on banana cream pie by someone that knows what they are doing-go HERE. Isn't that just beautiful? She's so talented it blows my mind).

As I was cutting a piece late in the afternoon to get a photograph, Danny wandered into the kitchen:

Danny: Do you need someone to test your pie?
Me: (Laughing) OK, would you like a small slice?
Danny: You'd better let me try a large slice to test.
Me: Oh, of course. you need to be sure.

I gave him a plate and he ran off to the table to dig in. I returned to photographing my pie when Danny returned bearing an empty plate.

Me: So how, was the pie?
Danny: I think I need to test another piece to make sure it is good.

Danny: (almost overwrought) Mama, I can't concentrate on playing unless I have more chocolate.
Me: Well, it's getting close to dinnertime...
Danny: But I can't think! (Waves arms in frustration) I can't think about anything but that pie!


It was a very good pie. It has a short shelf life, but somehow, I doubt you'll have much trouble getting rid of it. I'm expecting Danny to wake up at three AM unable to sleep knowing that pie is just sitting in the ice box all alone!

A fully-baked pie crust (I used the short paste recipe in Mastering The Art Of French Cooking because I knew it would hold up to a wet, heavy filling)

Whipped Cream (I used about a cup, but you may prefer a thicker layer or just dollops here and there)

Bake crust and slip carefully out of baking dish to cool on a rack completely. This will keep it from getting soggy. When cool, return to dish.

I made this tonight, only I used a graham cracker crust, because I felt lazy. Delicious! I ate the chocolate filling out of the pan while it was still warm. I just noticed this was posted in 2008. Four years later, I found it. I may never make store bought boxed pudding again. Thanks :)

I remember making this pie, which is odd as I make so many.

I'm glad you liked it. The only thing box pudding saves you is gathering cornstarch, sugar, and eggs. If you already have them on hand, making your own isn't that big of a deal. Unless you use the instant style pudding, which I think doesn't require cooking. Anyway, sometimes I forgo the crust and just layer it in a parfait glass, which is even easier.