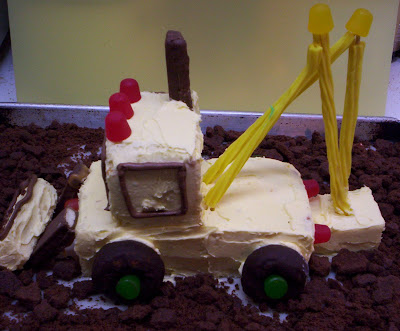 As predicted, it was a real pain and the Twinkie squished apart. I tossed it and frosted a piece of pound cake instead. Also, shoving a stick through a twizzler is much more difficult than I anticipated, as they were already kind of moulded together in the bag. I'm glad I made my own cake and frosting as this would have been a frustrating effort with store bought frosting.
Verdict? Totally not worth the effort-and now I'm stuck with a box of icky doughnuts, a bag of twizzlers that smell like Silly Putty and let's not even discuss the gumdrops which I promptly tossed in the dustbin.

A while back, my mother-in-law clipped THIS article from the newspaper and sent it to me. The cake is awfully cut, and she thought I might like to make it for Danny. Last weekend at the grocer, I started to purchase some of the odd ingredients (Click the slide show to see a picture of the finished cake).

The thing is, I'm not paying four dollars for a bag of Oreo cookies that no one will like. What's more, I'm not going to buy a frozen pound cake either-even if they claim it is "all butter." I caved and bought the two-pack of Twinkies (for $1.09! Good heavens, shouldn't junk food actually be cheap?) and some off-brand fake chocolate covered mini-doughnuts and the Twizzlers and such. I skipped the frosting in a can because...well, I just couldn't do it. Maybe if it were inexpensive-but it isn't. Had I bought all the pre-made items needed to make this cake it would have been forty dollars at least. Apparently they no longer make small packages of candy and you're forced to purchase massive amounts of gumdrops.

I'll probably bake the pound cake today, and some dark chocolate wafer cookies as well (to be the dirt). I'm envisioning a frustrating mess trying to spread frosting on a squishy Twinkie, and I wonder if I ought to take them out of the package and let them dry out a bit first (I doubt very much anyone will want to eat them). Do Twinkies ever dry out, or are they so pumped full of preservatives they can survive forever? I wonder if freezing would help?

My experience with "quick" projects like these from magazines and newspapers that use all pre-baked items is that they are almost always more work than anticipated. If you hear screaming and a few select vulgarities, it's probably me trying to keep the doughnuts and front loader from sliding off the cake.

I'll let you know how it goes.
Posted by Goody at 8:16 AM
Labels: Cakes

It looks much better in person, I just didn't have the patience to mess around with photos today.

For me as a fan of anything that has to do with machines, it is a wonderful idea!!! I´ll try to make my own excavator :)