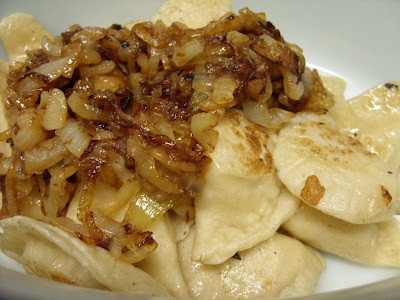 A few library book sales ago, I came home with The Dumpling Cookbook by, Maria Polushkin. I bought the volume for this recipe, but in the chaos of the holidays did not find time to try making vareniki until today.

Vareniki are not pirogi. I shouldn't need to point that out, but I will anyway. Some are filled with sweet mixtures of fruit and cheese, these are savoury filled with sauerkraut and onions. I cannot eat this sort of thing, but it was very well received by Mr. ETB and Danny. The beauty of a recipe like this is the quantity it produces. I have at least four more dinner's worth frozen now. Dumplings are such a hassle to make that being able to just do a large batch, and get it over with makes it a more attractive effort.

I had a jar of good sauerkraut to work with. I don't doubt that this will be good with standard supermarket kraut from a tin, but it may require a bit more rinsing to get rid of the extreme saltiness of the brine. I can't vouch for the fresh kind packed in bags as I don't buy it. It has taken me years to bring myself to be in the same room with the cooked stuff-I don't think I could handle the smell of the raw kraut *shudder*. I still don't bring cucumbers into the house. Ever. I wonder if I'd have the same aversions if the old man had sold caviar off his truck for a living?
"Beluga?! Oh god, not beluga!"

So the dumplings, back to the vareniki. These are Ukrainian, though I can't say that my Gran ever made them. She was more of a kreplach maker, and actually, I think she bought them. I think the most ethnic thing she ever prepared for me was some sort of stewed fruit compote that got served with wheat germ and sour cream for breakfast. Prunes and apricots, I think. Fantastic. I've been thinking about her a bit this week as the high-rise building she lived in went up in flames. I rarely read the Chicago papers, but for some reason I was looking at the Sun Times, and there on the front page was the apartment my Gran moved to in the late 70's. Her previous place was like something out of The Blues Brothers as it shook when the train went by on the elevated. Anyway, I'm sorry I wasn't more interested in Ukrainian cookery when she was still alive, as I'm sure she would have had an opinion about vareniki. Ukrainians have an opinion about, everything. Which brings me to my next point-I have no idea if these are traditional or not. I'm certain you couldn't find two people to agree on what is traditional. I do not wish to engage in debate over dumplings, nor do I aspire to insult the Ukrainian national dumpling with an inferior recipe. I followed the recipe in the book, and the boys liked them. That's traditional enough for me. I just want to head this off from the start as I've read enough heated comments about borsch that typically end with insults about Russian borsch being better known to the world because Stalin killed off all the Ukrainian borsch makers. Or something like that. So no angry letters about the vaeniki, OK? 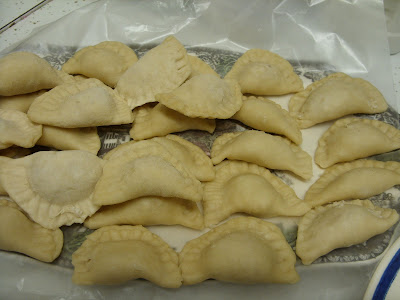 To serve: 4 tablespoons butter and 2 medium onions fried until crisp and browned

Make the filling ahead so it can cool.
Melt 1 tablespoon of the butter in a large, heavy pan with a lid. Add the kraut and cook over low heat for 5 minutes or until it is dry and beginning to stick to the bottom of the pan. Remove to a bowl. Melt remaining butter and add onions, salt, and sugar. Cook until golden. Return kraut to pan and add wine. Turn heat as low as possible and cover. Cook 45 minutes, checking frequently to ensure it has not cooked dry. Remove from heat, stir in sour cream and let cool. Do not fill dumplings with hot mixture or it will melt the dough. Chilled is best.

In a bowl mix together the flour, whole egg, milk and salt to make a stiff, but workable dough. You may need to add a few drops of water. Knead until smooth, wrap in cling film and let rest at least 30 minutes.

Divide dough in half. Keep remaining portion covered. Roll dough out to a thickness of 1/8 inch (you may need to stretch as you roll). Using a biscuit cutter (about 3 inch) cut out rounds. Brush very lightly with beaten egg whites. Place a teaspoon of filling in the centre, then fold over to form crescents. Pinch closed (I used a fork). Set on a baking sheet covered with wax paper and continue until all dough and filling is used (I got close to 70 dumplings, most of which I froze at that point).

Bring a pot of salted water to a boil. Cook vareniki about 10 at a time, and simmer until they float to the top. Remove with a slotted spoon to a dish that you keep warm in the oven. Meanwhile, fry the onions and butter.

At this point, I removed the cooked onions from the pan and lightly browned the vareniki until a slight crust began to form. This is absolutely not traditional, but I thought the boys would turn their noses up at dumplings that were only boiled. As I was not the one eating them, I gave them the dumplings they wanted rather than the dumplings I thought they should have. Besides, the frying pan was already dirty.

I served these with herring fillets in paprika sauce, and a salad we call, "Farmer's Chop Suey" (I know, I know). It is radishes and scallion in cottage cheese and sour cream (half plain yoghurt at our house). Seasoned with salt, pepper, and dill it is a favourite. It typically has cucumber in it but we don't use cucumbers in this house because they are disgusting and smell like my family. I really do wonder about my caviar theory.
Posted by Goody at 4:48 PM
Labels: Dumplings, Family Memories, Memories That Should Have Been Suppressed, They Didn't Eat Like This On The Collective, Ukrainian