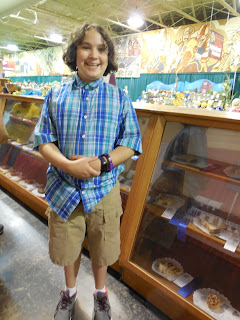 Danny would like to celebrate his State Fair wins by having a giveaway of the 2015 State Fair Cookbook (they are published the following year, but he had winning entries last year as well, and they're published in the collection). In addition to the cookbook, there will be other Nebraska souvenirs and depending on where the winner lives, a set of US dry measuring cups so you can easily prepare the recipes.

There were many wins, (Blue ribbon tea ring, biscuits, white cake, breads, etc.) and some perplexing losses (lemon tea bread lost to a banana bread). All in all, I think he took home around 20 ribbons, prize money and a bottle of honey from the Nebraska beekeepers for his winning honey cake recipe. He's already plotting next year's entries. There was a stunning upset in the kolaches-the woman that wins year after year lost to a newcomer. Danny placed fourth and he was amazed he even got that far in such a popular competition.

Want to win a Nebraska State Fair cookbook? Leave a comment before 15 September, and Danny will draw your name from a hat. Contest is open world-wide.

Now, let's have a look at my annual State Fair hat. 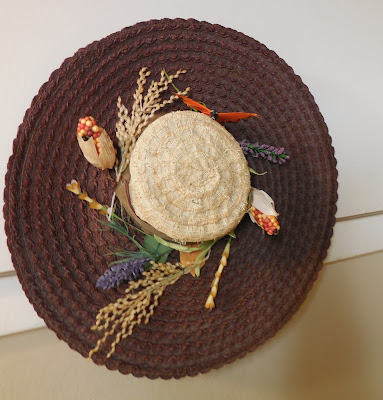 The hat attracted many compliments, which made me happy. I wasn't sure anyone else would appreciate the work I put into it. My family does not share my enthusiasm for the yearly hat. 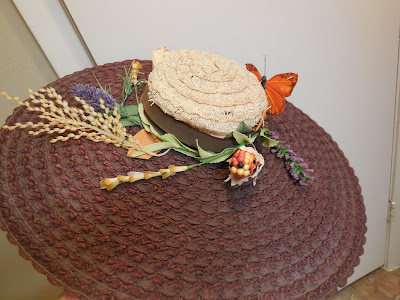 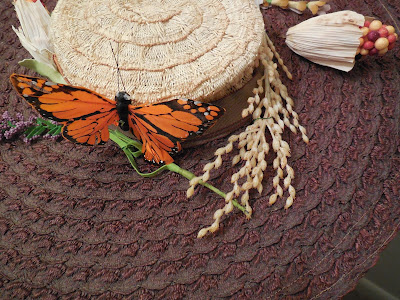 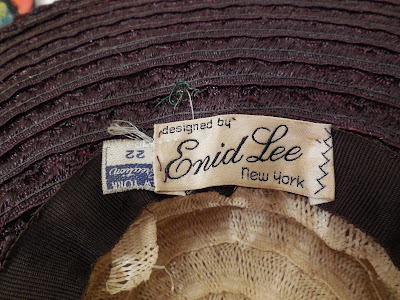 I was so glad I was able to salvage the hat and give it a bit more life. Some people obsess over their fair contests-I obsess over my hat. 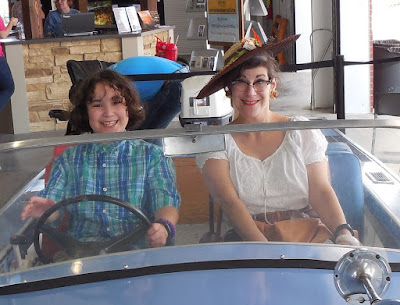 What else did we do at the fair? We drove a boat (on blocks in a building) 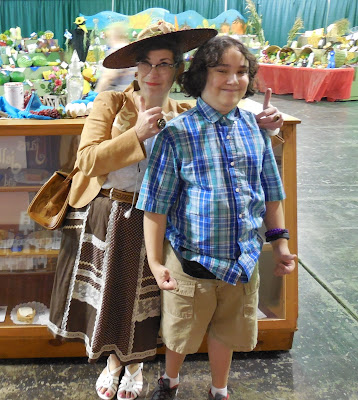 We admired all the exhibits in the Open Class building 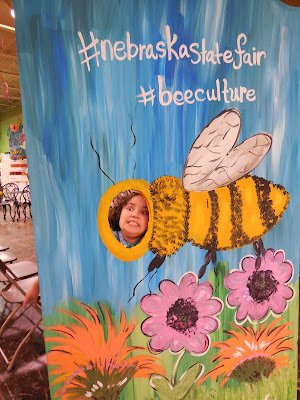 We visited with the beekeepers... 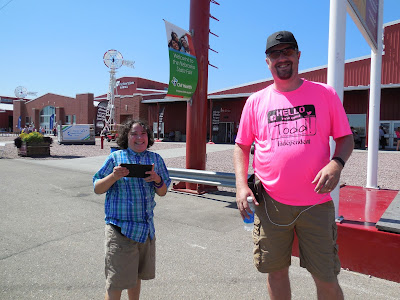 ...and we "Spotted Todd" from the newspaper for our chance to enter a contest and win prizes. Todd was wearing a gps that you could track him online through the fairgrounds, so really it was more like, "Staking Todd." Maybe we'll win one of those room heaters that look like a glowing fireplace . Fingers crossed! 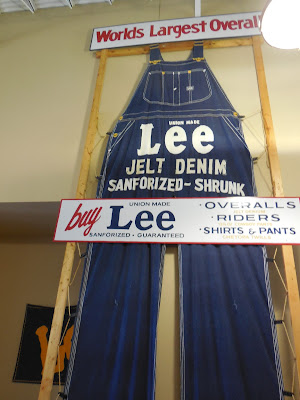 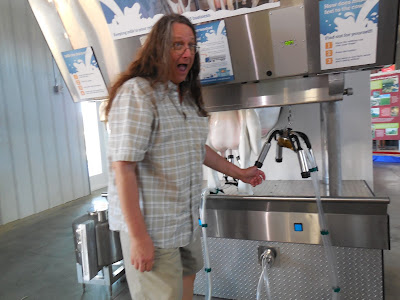 ...we saw some guy  stick his thumb in the dairy cow milking machine. Never saw him before in my life. 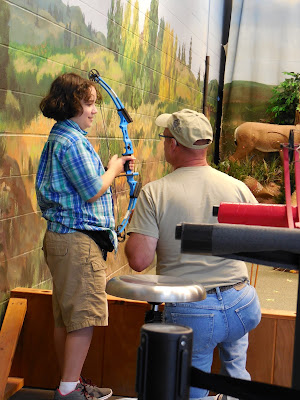 Game and Parks were there teaching children how to do archery... 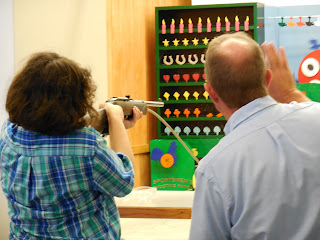 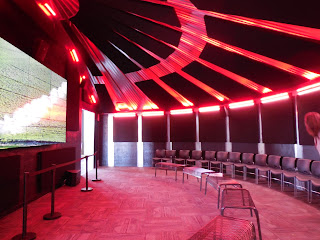 We watched a movie in a grain bin converted to a theatre. 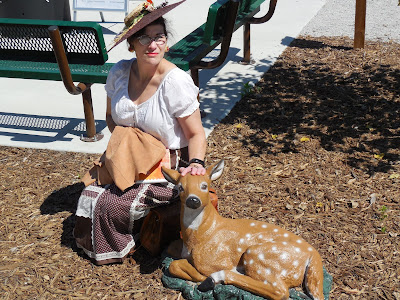 The Raising Nebraska building has a garden out front that grows a bit more elaborate each year. It will be fun to return year after year and see the trees and perennials progress. They've done such a fab job of it. 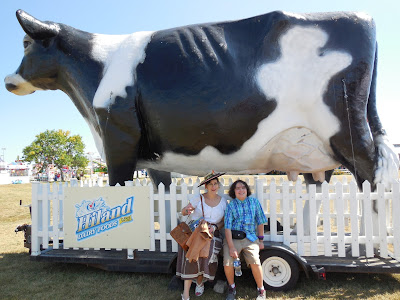 We ended our visit seated beneath a gigantic fibreglass cow. 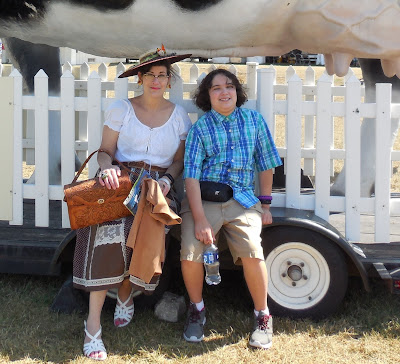 Let's have another peek at those prize-wining baked goods... 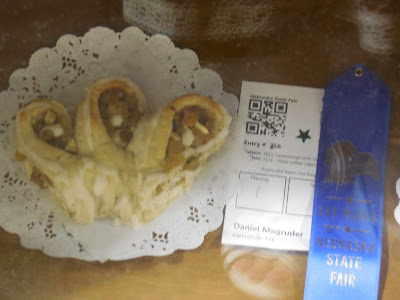 Danny's blue-ribbon apple-raisin tea ring was so good the judges ate all but three pieces they had left to display. I had to laugh at that.

The Nebraska State Fair runs through Monday. Can't make it in time? That's okay-you can start planning next year's visit.

Don't forget to leave a comment to be entered in the giveaway.
Posted by Goody at 5:21 PM
Labels: Danny Made It, Danny's cooking, State Fair

Huge congrats to Danny, at this rate he will be as famous as the likes of Jamie Oliver in years to come. Now I am hoping you kn ow who the hell Jamie Oliver is. Anyway give him a handshake or hug from me please. How perfect was your hat, and perfectly worn on a slight tilt I might add. The State fair looks amazing and I would love that huge cow in my garden, could have a door in its guts and make it into a room!!! Feel free to enter me into Danny's competition.

Wow! Well done Danny! I can't believe that flowered lemon cake didn't win ALL the prizes! Now I know the judges do taste the entries, lucky them - but it would be odd to judge without taste being taken in to account. You hat is superb. Please don't enter me for the draw as I neither bake nor make jam...

Well done to Danny!! That's such a compliment to have most of one your entries almost completely scoffed by the judges - it must have tasted soooo good.

Didn't they have a category for best hat? You would have won hands down. It's a brilliant hat and I love it on you.

Hope your Labour Day weekend goes with a bang - its back to the normal routine for me on Monday, I'm afraid.

Congratulations, Danny! I have no doubt you're moving swiftly and stealthily toward future kolache domination.

Bravo Danny!
I knew that tea ring was going to be a hit!
Love that hat!
I think we need a fiberglass holy cow like that here in Nepal.
Enter me into the giveaway!
I have a friend in Florida who is coming to Nepal for Xmas.

Congratulations, Danny! Your baked goods always look so yummy.
Great fair hat! You look like you all had a great time at the fair. Did the "stranger" need help getting his thumb out of the milker?

Congrats Danny!! You did awesome!

And, er, I hope that 'stranger' didn't suffer any permanent injuries.

Have a restful Labour Day!!

Well done Danny! Given how many baked goods the judges must have to sample, eating so much of that tea ring was a real compliment.

I'm now picturing the former Queen of Kolaches plotting her revenge for next year... I bet next year's kolache category is going to be like something from a telenovela.

Giant overalls, giant cows... you chaps really do do everything bigger out there!

Do tell more about the kolaches drama. Like Mim, I sniff the scent of drama brewing in somebody's kitchen ("...hand me that eye of newt, Arnold").

And the hat! Where did you get that hat?! It's a sweet thing in the nicest meaning of the word, and exactly the proper topper for the mother of the best baker at the Fair.

Was the "stranger" captured by his curiosity? Ahem.

I love the hat. I used to go to the Missouri state fair every year, but moved away. Danny did a great job!