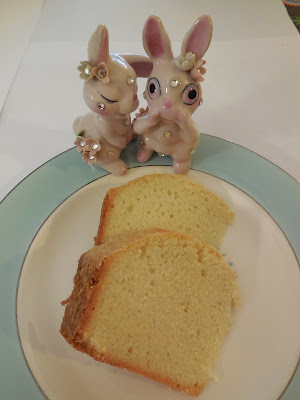 "Oh look Floppy Ears, someone made Maxine Morrison's pound cake! I love  that cake."
"So did Governor Morrison, hence the name, "Governor's Favorite Pound Cake."
"Well...she also has a recipe for something called a "Corned Beef Salad Surprise" involving tinned corned beef, salad cream and unflavoured gelatin."
"That would have been quite a surprise, even in the 60's."
"Indeed." 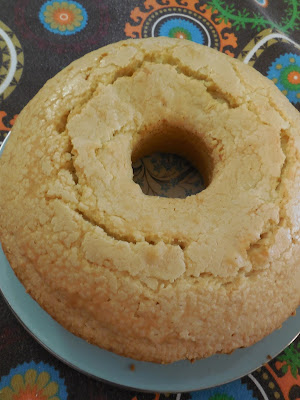 I don't think it is unfair to point out Maxine Morrison was more interesting than her husband. The former First Lady of Nebraska (1961-67) was born in 1915 and grew up in Greeley, Nebraska. After attending college she worked as a teacher. After marrying in 1935, the couple moved to Lincoln where Mrs. Morrison became a fashion director for Gold's department store. When her husband became Governor, Mrs. Morrison became both the first chair of the National Governor's Wives Association, and the Nebraska Trade Mission to Europe. She died in 2004. 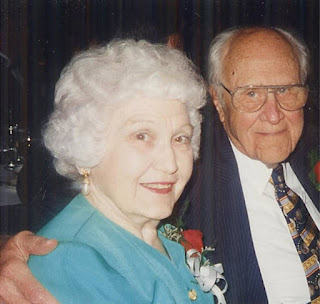 Photo-McCook Gazette
If that isn't a look that says, "I sure could go for a slice of pound cake" I don't know what is.


Governor Morrison is best remembered for enabling the coverage of NET (Nebraska Educational Television) and helping to expand the scientific research departments at the University of Nebraska.

I would like to thank Danny for digging up all this information for today's post. Now, onto the recipe.


I did not have a good feeling about this pound cake. There's no leavening agent, and you don't beat the egg whites separately for height. There weren't instructions about preheating the oven. Against my better judgement, I preheated-something my own pound cake recipe does not require. Because of the era the book hailed from, I decided to err on the side of pre-heating (without it, the cake would also have required longer than an hour to bake. Sometimes with old recipes you have to play detective). There were no instructions for treating the pan, so I buttered and floured it-that was a good call. If I could do anything differently, I'd add a pinch of salt and use a smaller tube pan as it didn't rise a great deal (it did rise a bit). 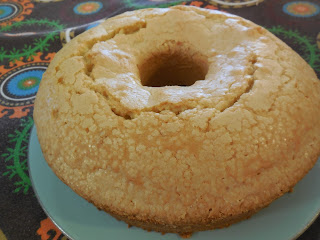 Cream butter and sugar. Add eggs, one at a time. Add flour gradually.Stir in flavorings. Pour into a greased and floured tube pan.  Bake in a preheated 325 degree F. oven for about 1 hour. Cool on rack.


So, how was the cake? Delicious! I can see why it was the Governor's favourite. I served it with some sliced strawberries macerated in a bit of sugar.  Whipped cream could turn it into a fancy strawberry shortcake style dessert. The cake is solid without being stodgy, and the buttery flavour reminds me of shortbread. The cake stayed fresh over a week stored at room temperature beneath a dome. We finished every last piece, much to the displeasure of the greedy squirrel that stands at our patio door begging. Sorry, Blondin-Mrs. Morrison's pound cake is far too soft for sharpening your teeth, and far too delicious to share with a rodent.

Next time, I have a casserole and I promise it does not include corned beef and gelatin!
Posted by Goody at 12:43 PM
Labels: Cake, First Ladies, First Ladies' Cookbook, Governor Morrison, Maxine Morrison, Nebraska 150, Poundcake, Statehood

Hmm... I googled Corned Beef Surprise just to see how surprising it was and all I came up with was a recipe from Guam. That was surprising because the Guam recipe was a stir-fry of canned tomato sauce, bell peppers, onions, tinned corned beef, & some Italian dressing. If that doesn't sound like a recipe to use up WWII military rations I don't know what does.

These old recipes usually assume you really know your way around a kitchen & can be a bit terse in instructions. All my favorite pound cake recipes don't have any leavening agents and solely rely on eggs for what little bit of rising they do. Except for maybe the 7Up pound cake which gets a bit of oomph from the carbonation in 7Up. A lot of my recipes for poundcake from old cookbooks call for a preheated oven. Some have you bake the cake for about a half hour to 45 minutes and turn the oven off but leave the cake in the oven for another hour or so. I'm told that recipes for 'cold oven pound cakes' first appeared in advertising campaigns designed to entice homemakers into replacing wood-fired ovens with the gas stoves that were being introduced to market. I love pound cakes because they aren't fussy, are sturdy/travel well and can suffer a variety of mistreatment (such as random power outages) and still turn out fantastic!

I'd forgotten about all those cakes baked with soda pop. It seems like there was a root beer cake that was popular at some point in the late 60's/early 70's that everyone's mother was baking (except mine on account of being diabetic).

I'm not sure I could bring myself to make corned beef salad surprise. Not because I have a problem with savoury jello salads (I don't) but because I have an aversion to the smell of tinned meat. I might be able to eat it cooked in a casserole but not all slimy in a salad. The Guam recipe sounds interesting.

Our family's Pound Cake was exactly that: it called for 1 pound each of butter, sugar, flour and eggs (and the grated rind of one lemon, lest one overlook the need for vitamins).
"Cream butter and add sugar, beating until foamy. Add egg yolks, beaten light, then grated lemon rind. Beat 15 minutes. Fold in the stiffly beaten egg whites, then add the flour. Bake as a loaf in a slow oven,(325F, 1-1 1/4 hours).
"This is a large rich cake which will keep fresh for a long time if wrapped in wax paper and kept closely covered."

I do recall making this cake called for young persons volunteering their strong arms to make lots of noise with wooden spoons and granny's old baking bowls. Danny?

Originally they were made with a pound of each ingredient. Personally, I prefer a sponge for most things, but pound cake has the advantage of being a good keeper.

That sounds more in line with how I make a pound cake (beating the egg whites alone). These kids today use mixers for everything. No strong arms around here ;)

@Ann
Nebraska is an interesting place with varied food traditions. I'm learning quite a bit as I go along. I've only lived here 16 years.

That corned beef surprise sounds absolutely minging. I can never get over the amount of gelatine-based dishes that seem to have popped up between the 50s and 70s. My mum had a book called 'Chivers Jelly Go Round' when I was a kid - Chivers is a brand of jelly/jello over here - and I remember being fascinated by its awfulness.

@Mim
Sounds like our classic publication, "The Joy of Jell-O". When I was young there was still the idea that gelatine had health benefits (strengthening hair and nails, a bit of protein, etc.) and being inexpensive it was used in everything. That said, I do love tomato aspic even if I need to eat it by myself as the boys won't touch it.