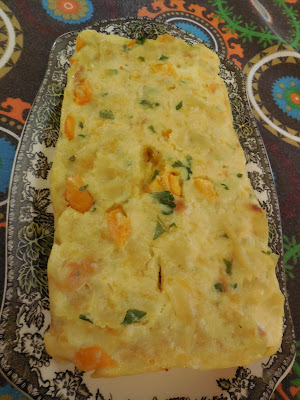 As part of our yearlong statehood celebration, I'm cooking up some recipes from my (too) many local cookery books. Today's dish comes from the Nebraska Centennial First Ladies' Cookbook published in 1967. Not all the recipes came from First Ladies (many did) and this simple casserole was submitted by Mrs. Dan Jones Jr. of Lincoln, Nebraska.

I made two small changes to the recipe as I had yellow bell peppers to hand rather than pimentos, and I used dried onion as I couldn't imagine cutting open an onion for a whopping single teaspoon! They really didn't overdo onions and spices in the 60's.

Danny managed cooking most of this by himself, though I did help out lining the pan with parchment. I must admit, it smelled good baking away in the oven, and the boys really enjoyed it. I did not partake as all that cream, butter, and cheese would have had me suffering (not that I'm unwilling to suffer for cheese, but not cheap cheddar I bought for $3.00 a lb. I'm a bit of a snob that way).

Mushroom sauce to serve. There wasn't a recipe for the sauce but being 1967 I'm going to go out on a limb and guess it was condensed soup. I skipped it.

Cook macaroni. Add butter to cream and scald. Pour cream over breadcrumbs. Add remaining ingredients and pour into a loaf pan lined with oiled paper. Place in a pan of water and bake at 350 degrees F. for 1 hour or until set. Mine took about 40 minutes. The recipe doesn't mention it but if you plunge a butter knife into the centre and it comes out mostly clean. it is set. Too damp, and it will fall apart. Treat the loaf like a quiche. 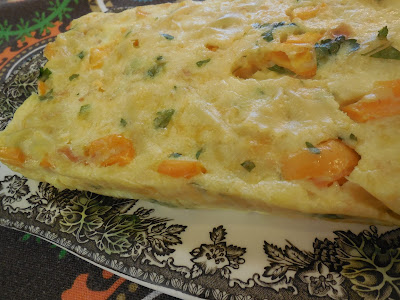 I served mine with a red cabbage slaw. The loaf re-heats perfectly in a covered tray in the microwave for five minutes. If using an oven, about fifteen minutes at 300 degrees ought to do it. I imagine it would be delicious cold, and make good picnic fare as it sliced neatly and easily.

Next time, I have my eye on a sponge cake recipe baked with sweet wine.
Posted by Goody at 5:02 PM
Labels: First Ladies' Cookbook, Lincoln, Nebraska 150

Wow, an entire teaspoon of onion & green pepper. Talk about reckless bravado! That dish actually looks pretty unlike most community cookbook dishes. One can never have too many cookbooks of any sort says I!
About things being just 'pretty' (from the former post-
Apparently 'pretty' is synonymous with vacuous & insipid nowadays. I read a review of my beloved Houbigant Orangers en Fleurs by a famous 'fumista who described it as 'just pretty, that's all I can say about it. Nothing especially interesting, just pretty." Pfffft! HOeF It's gorgeousness incarnate & downright magickal!!! (IMHO)

I like the look of this - it's a solid lump of cheese-flavour, what's not to love? - but my husband would run screaming. That would leave me to eat the whole thing by myself.

...y'know, I'm failing to see a problem with any of this dish!

Like you, the mere mention of cream in anything has me running for the hills!
Another reason why I'm glad I'm an adult now and not in the 1960s, I can't eat anything lacking in spices. Bet Jon would demolish it in seconds! x

I'm working my way through the blogs I've missed...

@Bibi
Oh, okay, now I get it.
I'm in complete agreement with you on the HOeF. That's one hell of a fragrance for the inexpensive price.

@Mim
Exactly. MMMm, cheese. If I could eat this sort of thing I absolutely would.

@Vix
When my mum died in '92 there were containers of spices in the cabinet that she bought in the 50's when newly wed. Sometimes. she'd add a pinch of dried oregano to chicken and call it, "Italian chicken".

@Ann
Maybe onions were smaller in '67? I don't remember seeing large Spanish onions until the 80's.

@Veronica
Glad you're back! I hope you had a lovely Easter in Ireland.

Measuring vegetables in teaspoons is hilarious - or scary? I have heard that there are parts of the US where it's almost impossible to buy fresh vegetables. Don't know if it's true, but if so it might explain the stinginess?