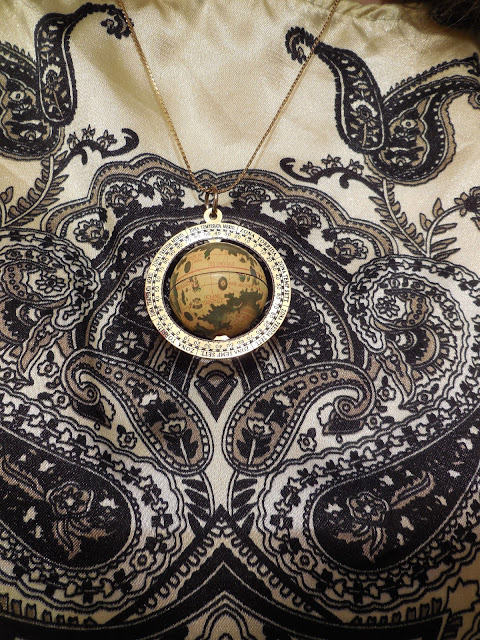 When I purchased this lovely little globe necklace, the salesclerk looked confused that I'd want it. Holding it up with one hand, and pointing with the other he declared, "That's all in Spanish. You can't use that." 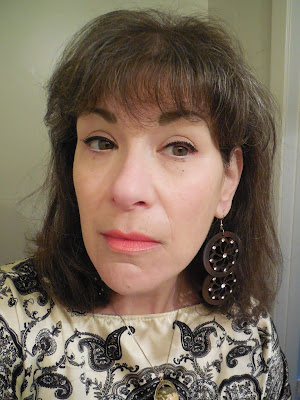 That's my WTF expression.
I dunno, does anyone buy a teeny-tiny globe necklace because they plan to use it? Would the fact that it is in Spanish make that much of a difference if you were using it? I reckon Australia would still be Australia in Spanish, and so on. I'd like to think I possess enough general geography knowledge that I could manage it if something in life necessitated peering at the globe around my neck to see if Canada borders the United States.

What struck me was how serious the man was about it being a functional object. He didn't seem otherwise unintelligent, which now makes me wonder in hindsight if it was some sort of racist comment I didn't pick up on at the time. As someone who is routinely mistaken for Latina, it is all the more confusing. As I wasn't angrily told to, "Go back where you came from!" I'll assume it probably wasn't racism, at least not the blatant sort.  Very odd. 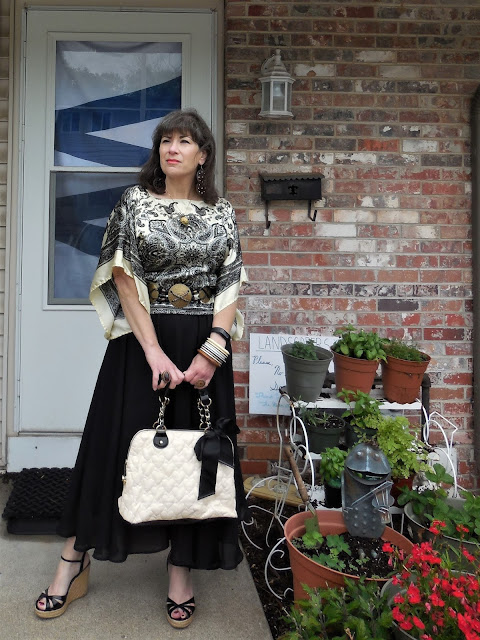 We had some wild weather last evening (100 mph winds, downpours, hail, etc.) and the weather service just issued a tornado watch for this afternoon and evening. I was surprised we didn't lose power last evening and I'm hoping for the best tonight. We have a proper basement at this house, unlike the dirt storm cellar on the farm. I still take the weather warnings seriously after being through a tornado, but I don't dread sitting it out quite as much. For the moment, we're in a watch and wait mode, and the weather is quite nice at present. 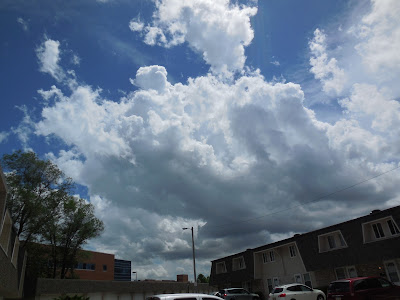 Dramatic clouds, but blue skies behind. 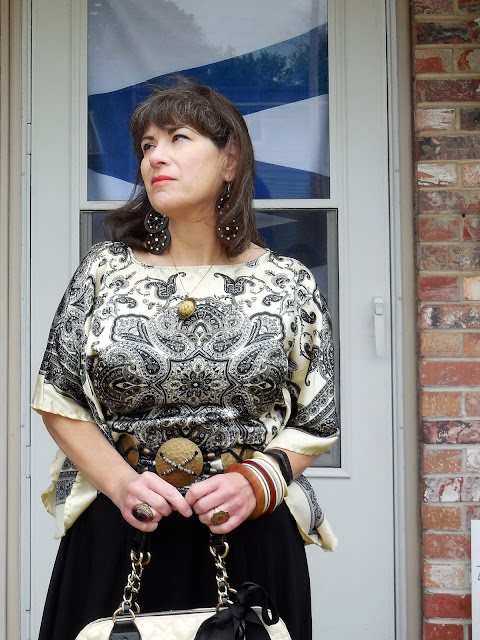 I've never made a scarf-blouse, but I was happy to find this one for a dollar. The sleeves are sewn to the side of the body eliminating the problem I was having earlier with large sleeves. The silky material is fun, and the print interesting. It would probably look better on someone with smaller boobs. 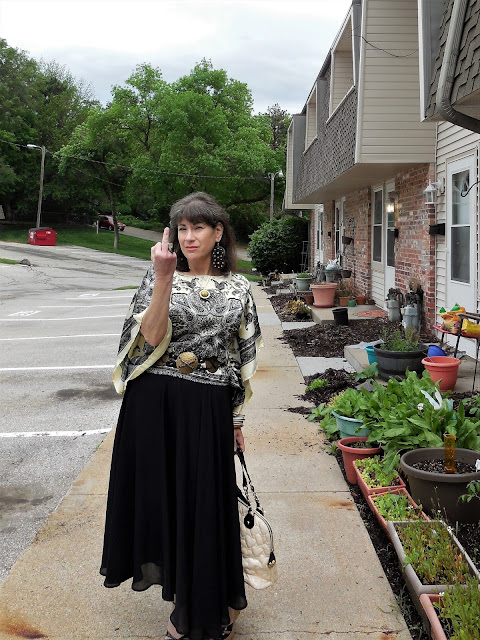 Yep, that's my opinion on the concept of, "Flattering" clothes. Wear it if you like it and fuck anyone that doesn't. 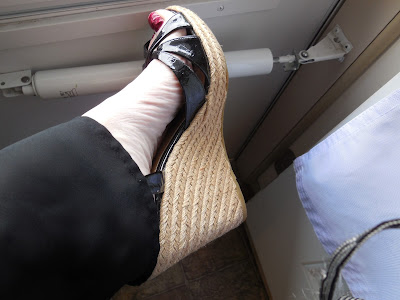 That's what a $500.00 pair of shoes looks like (I saw some listed for even more new with the box). I guess you pay for the little inter-locking G's on the sole? Walking around, it isn't like they're a whole hell of a lot different from a pair of sandals I can pick up at K Mart, but hey, Luxury Goods! Imagine having enough money that you'd wear something a couple of times and then simply donate it to Goodwill. Well, I can't imagine it. 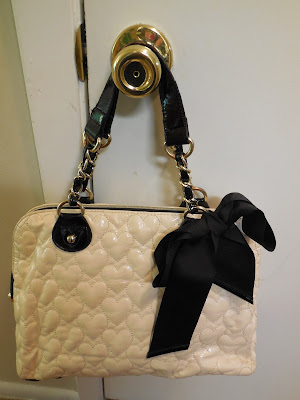 A nice Betsey Johnson bag is more my idea of a luxury item. I think I paid around three dollars for it at HAnd-Me-Ups. 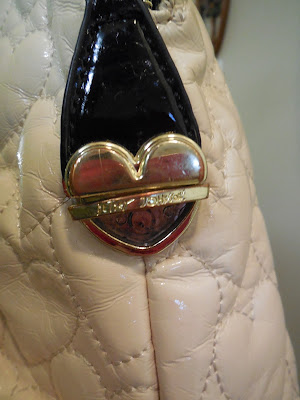 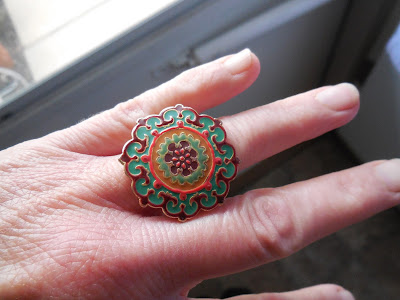 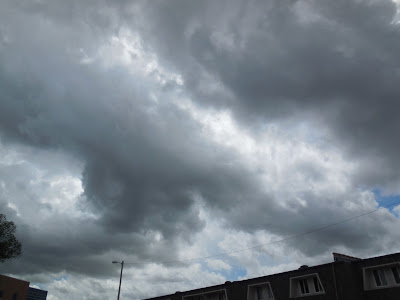 Those puffy white clouds have turned menacing in the time it took to write this post, so I'm off to unplug all my electronics in the event of lightning and power outages. I'll see you later unless I end up over the rainbow in which case, I won't be clicking my ruby slippers to get back here anytime soon.

Oh dear, your attitude in this post is just like mine. I also often think things'd look better with smaller boobs but f that. If I ever come to Nebraska can we meet up? (Don't worry, this is highly unlikely) I love your outfit, by the way. So swoopy & dramatic.

Goodness! If I found those shoes I would have peed myself....then peed again in anticipation of a tornado!

Lady, you are made of tough stuff!! Good on you.

Plus you look MAHvelous in that scarf blouse.

I envy your skills to find bargains and look absolutely gregarious.Thank you .I am now making jams.

For some reason I'm more excited about that gorgeous enameled Arabesque/mandala psychedelic ring than those Gucci wedges or BJ bag.
Maybe the Spanish globo guy was joking? I can't imagine using a tiny piece of jewelry as any sort of geographical reference. (Even with my bifocal contact lenses.)

I love the caftan-esque flow of your ensemble! I do get tired of planning outfits around my boobs, but when you's got a 49 inch bust that's the way it goes!

Buckle up for that tornado weather!

You look gorgeous in that outfit! You really have a knack for putting together some wonderful pieces to make a cohesive yet creative and unexpected whole. There's something about black and white that's timelessly stylish and dignified on anyone. But when you add a colorful pendant that's an instant conversation piece, you're styling to the max!

I find it strange that the sales clerk assumed that you don't speak Spanish or that the language on the pendant was all that important to begin with. As if anyone would rely on a piece of jewelry to learn all there is to know about geography, LOL.

How odd about the globe. Reminds me of an episode of Friends when Phoebe asked for a globe and Monica produced a diddy pencil sharpener globe, but it still worked!

The scarf blouse is very pretty, it looks silky smooth, I bet it's nice to wear.

$500 shoes? Crikey! To have that much money and then to donate them. They're lovely, but all I can think of is when the rubber heel wears away. I sparingly wear my £10 wedges for this reason, I love them so much, I don't want them to be unwearable. I wonder if cobblers can save rubber soles.

Those shoes! (But could I wear them without falling off and breaking an ankle...?) That bag! Whatever sacrifices you've been making to the gods of Goodwill, they are pleased. I discovered a Tommy Bahama tiki shirt last month and considered myself fortunate.

The globe necklace is exquisite and aha! a dainty echo of the belt buckle -- but what a very odd encounter with the clerk. I've co-workers of Malaysian ancestry and they've commented about hearing some very inventive queries about their ability to speak Spanglish.

No, your scarf blouse looks perfect on you.

I love the outfit - it's Lady Goody again!

Gucci shoes for 7.99 - wow - that was a find and a half. No, I can't imagine being that rich either. I love your Betty Johnson bag - it reminds me of the 1960s although I know it isn't, but it's the patent leather and the quilting...

Hope you have ridden out your tornado by now - if you see Dorothy say hello for me!

I now have a vision of you as some sort of explorer/secret agent with a bracelet of USB sticks, medical kit hidden in your wedges, and a Swiss Army Brooch to go with your globe pendant.

Ha! What a weird guy. Some people miss the point massively don't they!

Love the scarf top. I find dress for your shape rules not only restrictive and repressive but also a complete fail style wise. So many people failing to dress for their lifestyle/personality/taste ... and that 'shows' in discomfort and the clothes just not looking 'right'. Far more important to wear what you need/want to life your life in.

@Radostin
You'd always be welcome at ours.

@Thrifty Parka
My first thought was they might be fakes-but no, they're genuine.

@Hope
I'm so excited for you. Happy jam making!

@Bibi
The ring is some cheap brand they sell at Shop-Ko!

@Emily
There's so much strangeness out there I fear I might be losing my ability to be shocked by it. That fellow was just so over-the-top I couldn't help but notice.

@Vix
If anyone can turn a simple scarf into a creation worthy of a catwalk, it is you.

@Melanie
I might be the only person alive that's never seen an episode of Friends. I spent most of the 90's oblivious to popular culture.
My cobbler can fix almost anything, but branded Gucci soles might be impossible.

@Ann
Ha-I use the incorrect word for things frequently. I can understand calling a peacock a seahorse. I'm getting old.

If you think the price of the shoes are insane, I have a twin set in an upcoming post that retails around $700. People have lost their minds.

@Beth
For what it is worth, the shoes are well made and unlikely to cause a spill provided you can walk in heels to begin with.

Sometimes people will do that thing where they speak slowly and loudly to me before realising I speak english-as though an inability to speak a language would change by being louder.

@Veronica
The worst of the weather missed us, and went to Iowa instead. I can see where the bag has a 60's vibe now that you mention it-good observation.

@Mim
I like that mental image-perhaps I should give it a go.

@Perdita
I have a rule that if I must adjust an item of clothing more than three times, away it goes. Generally I find that happens with items that weren't really something I liked to begin with.