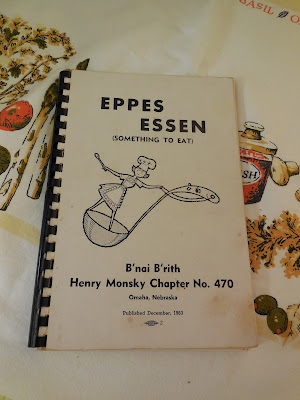 Today's recipe is for a sponge cake made with sweet, Kosher wine. Having just finished Pesach, I had a bottle of Concord Grape Mogen David to use up. Honestly, other than roasting a brisket, there aren't that many things to do with the stuff other than use it as a mixer. The cookbook is from a local Jewish organisation and it was published in 1963. 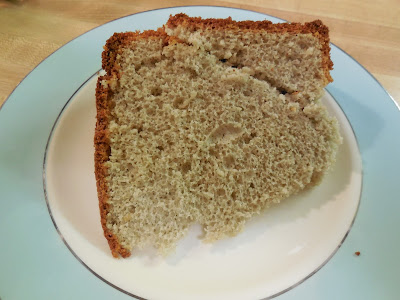 Pardon the imperfect slice-I had trouble dislodging it from the pan. You'll note, the cake isn't pretty, but that's the consequence of red wine and cinnamon. If you can get past eating grey cake, the flavour is rather nice. Danny liked it, MR. ETB thought it was unremarkable. It held up well for a week covered at room temperature. I had a hell of a time getting it out of the pan. If you know what Haroset (chopped fruit and wine) smells like, this cake is exactly like that. 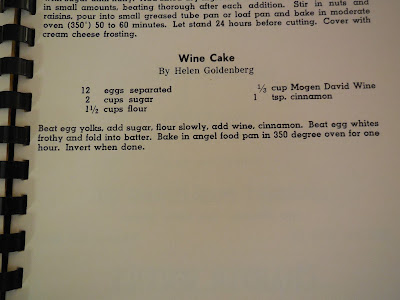 The original recipe was vague. I did not grease the tin. Were I to try it again, I would. I also beat the egg whites until they held soft peaks rather than the frothy stage which didn't sound right to me. Sometimes, particularly if English is a second language these things don't get translated they way we'd expect. I don't know what Helen Goldenberg's story was, but she might have been one of those, "A bit of this, a smidge of that" type cooks that never set things down in a recipe.

It is interesting to note that she isn't listed as Mrs. Joe Schmo" or whomever. In 1963, the etiquette would have been to use the husband's name unless one was single or widowed. I'm not certain which she was, but it is unlikely that she was making a feminist statement by refusing to use her husband's name. Not impossible of course, but unlikely (at least in the Bnai Brith circles). Even my mum who was well ahead of the times in her insistence on wearing trousers and smoking cigarettes publicly, would have used my dad's name. I only point this out because there's a tendency to impose our etiquette and social norms on the past, particularly when it wasn't that long ago. Anyway, if I've got it all wrong and Helen Goldenberg was the Emma Goldman of her day, I apologise. A quick Google search didn't reveal much about her. Apparently, she had a very common name.

Now, for the tour. Click here to explore our beautiful Nebraska State Capitol building in Lincoln, Nebraska. If you like Art Deco, you'll love our capitol building. The virtual tour is nice, but if you can get yourself to Nebraska, it is definitely worth a visit-ideally more than one day to give yourself time to see all the mosaics and other features. I've certainly never encountered another building quite like it. 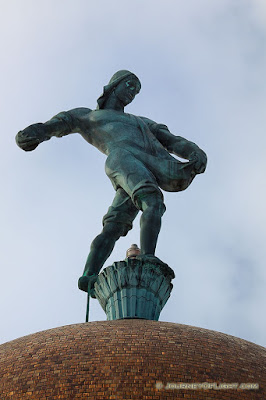 I'll share a quick story that longtime readers might remember. When Danny was about three we took him to the Capitol to visit with some of Mr. ETB's former co-workers. I warned him as we approached the building that the Sower statue atop the dome was a bit surly and would pelt unsuspecting tourists with corn when they passed by. That got laughs from people waiting with us to cross the street. As we got closer to the building, I pointed to the door of the capitol and then up to the Sower before instructing him, "Okay, RUN!" We met up at the door and I pretended to be in pain from being hit with corn. I dramatically checked him over and congratulated him for outrunning the Sower. We still joke about it when we go to Lincoln, and I'll look forward to the day when he tells me he pulled the same stunt on his children.

The only wine cake that ever happened at our home was subbing cold duck or Gallo burgundy for the water in a yellow cake mix. A dash of nutmeg was added to make it fancy as I recall. We I left home & developed more sophisticated tastes I used Old Sack instead of cold duck or cheap wine & it made a really nice cake!

That verdegris sower looks scary more than surly! I'd run like Danny did too!

Is Jardins de Bagatelle as gorgeous a white flowers frag as it sounds or does narcissus ruin it?

Such a lovely building, though the virtual tour isn't playing ball for me, I'll try again later as I love a bit of art deco.

Love the story of the Sower! Reminds me of my step dad pelting my brother with fir cones when he was a child as he walked beneath a canopy of trees in a forest. He told him it was the squirrels and they didn't like him there!

I do remember being instructed as a cub reporter to use Mrs. Joe Schmo unless he was deceased or discarded. I also remember conversations about the lively lady who trailed her husbands' names behind her Christian name like a string of scalps and was rewarded with a lengthy obit (and two head shots).

And then there were the lady poets who always used both maiden and married names, lest they lose the social standing of their birth families. Helen Steiner Rice comes to mind. We used to concoct verses for cards she would not have written.

Yaay! Got the virtual tour to work! The camera icon photos are worth the effort. I could spend a day or two here, sketching the architectural ornaments. (Fie on the those 60s boxes that deface so many cities!)

Haha! I loved the bit about the Surly Sower. Hmmm, that cake looks delicious...I don't think I've ever seen a recipie that called for so many eggs!!

I instantly thought of this, which I would try if I were able to consume either wine or cake: http://bookclubcookbook.com/juicy-wine-cakes-from-a-confederacy-of-dunces-cookbook/

I usually use leftover wine with meat. If it's very sweet I guess I'd use it like madeira, for the base of a sauce.

It was DRY Sack not Old Sack!
Sheesh, so much for sophistication, eh?
Guess I'll have to settle for just being older.

I never judge a cake by what it looks like but by how it tastes - yours sounds good!

I love the Sower story - how gullible kids are..

@Bibi
I find Jardins de Bagatelle VERY sweet and floral. That said, I like narcissus, so if it is in there, I'm probably fine with it. I wouldn't wear it on a hot day though as it becomes too much, quickly.

@Ann
Danny is studying French and has fun reading appliance directions and other bilingual instructions.

@Vix
Officially, I never bothered to change my name but after Danny was born it became a complication as I had to prove I was his mother. I use both names now, although I never bothered with the official name change.

@Beth
I sort of like the idea of using all the former names, particularly if she'd managed to bury them. Might serve as a warning for the next suitor.

@Thrifty Parka
I know! That's just a massive number of eggs for such a light cake.

@Mim
The stuff is so sweet it makes my teeth hurt. I can't imagine using it in place of Madeira.

@Bibi
A dry old sac can describe many a fella ;)
Maybe you have Old Sacramento on your brain.

@Veronica
Hee hee, yeah kids will fall for any old thing we tell them;)