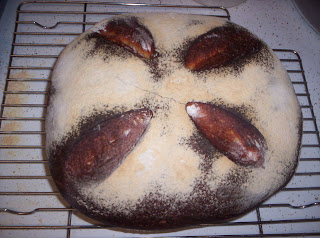 This bread looks much better in person as the photograph does not do justice to the size of the loaf (it is huge). I was distracted (with a two year old? Gee, I’ll be that never happens to most mothers) and scored the loaf before it went through the full second rise. It did not seem to harm the loaf any and made the design a bit more interesting.

I’m not convinced that dusting the loaf with flour added much to the overall appearance of the bread-matter of taste, I suppose. The loaf did get a substantial spring in the oven, which was satisfying. It is a very simple wheaten loaf made with a sponge that sat for eight hours before being incorporated into the dough. The “recipe” is quite similar to the “Rustic Loaf” I posted a few months back. Instead of making two loaves from the recipe, I ended up with a rather large single loaf.