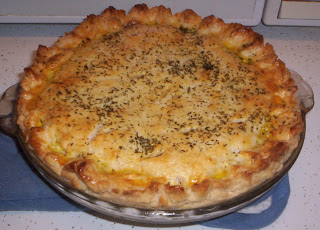 My salmon pie is slightly different than the one associated with Quebec, yet it has many of the same elements. Instead of flavouring it with savoury (which is traditional) I use chervil and a bit of dill as well as a product called “lemon pepper” (dehydrated lemon, pepper and salt). I also omit the onion as I don’t think it works well with the dish. Mine is a two-crust pie whereas the traditional one has only a top crust. Certainly, you could prepare it without crust at all-I have seen some that resemble “cobbler” with dollops of batter and I would think Vermont Common Crackers (they look like giant oyster crackers) would make an excellent topping as well.

1 15 oz tin of salmon
2 ½ cups mashed potatoes prepared light with three tablespoons butter and enough milk or cream to keep them from being leaden.
½ teaspoon lemon pepper (or ¼ teaspoon salt, a pinch of pepper and a small squeeze of lemon juice)
¼ teaspoon chervil or savoury
Crust for double pie
1 egg + t teaspoon water for optional wash.
Serve with crème fresh*

Drain and break up the salmon. In another bowl, combine the mashed potatoes and spices. After fitting the bottom crust into the pie plate, smooth in a layer of mashed potatoes. Then spread the salmon on. Top with the remaining potatoes and remaining crust. Cut to vent. I prefer to brush my crusts with an egg wash of 1 yolk plus 1 teaspoon water. Then I sprinkled extra chervil on for appearance.

I served mine with crème fresh that I made yesterday from 1 cup heavy cream and ¼ cup sour cream. Shake well in a glass jar and let sit at room temperature anywhere from 5-24 hours (depending on the room temperature) until thick. Shake well again and refrigerate. Keeps ten days.