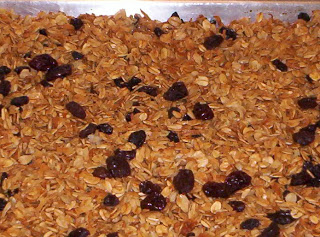 Last evening, I noticed my husband defrosting some dark cherries and covering them in honey for a late snack.
“You know, granola would be great on that.” I observed .

So early this morning, I read a number of recipes and ended-up ignoring most of them and came up with this recipe. The framework came from The Prepared Pantry granola recipe, though mine took considerably longer to bake. I think the principles are all pretty much the same in most recipes-low heat, rolled oats, a sweetener, some oil and fruit. I opted to use shredded coconut and sunflower seeds in mine, though nuts would probably work fine.

I’m not sure why, but as it baked, there was a very distinct odour of Play Doh to it. The smell dissipated as it cooled, but for a few minutes there, it really reeked. I have no idea what caused it.

Due to the large amount of oil and lack of preservatives found in commercial granola, it is probably best to use it within a week or so, though one recipe suggested freezing homemade granola (which I will try). I would store it in an airtight canister.

Preheat the oven to 345 degrees F. Mix dry ingredients except fruit together. Add oil, extract and honey. Coat well. Spread in a large jelly roll pan and bake for ten minutes. Stir. Return to oven until browned and mostly dried out. Remove from oven and add fruit. Let it cool completely before placing in canister as it will dry out more and become crisp.