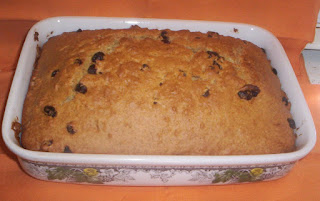 Another Friday, another Lenten cake. This one is really more of a cross between soda bread and cake. A bit of strawberry jam at serving time wouldn’t hurt any. I also suspect (given the lack of butter and eggs) that it won’t be a very good keeper-so slice it up and eat it fresh (but wait until it is cooled to slice or it will crumble rather badly).

Pre-heat oven to 350 degrees F. Sift dry ingredients, add liquid slowly until batter is thick, but able to be stirred (you may need to add as much as a half a cup of milk or water for this to happen, depending on your brand of flour, humidity in the room etc). Do NOT over-mix as you don’t want the flour to begin developing gluten and really turning into bread. Spread into a 9x13x2 pan that has been well greased. Bake for 30 minutes and then begin checking for doneness with a toothpick. Mine took a total of 45 minutes, but you really want to watch it to avoid over baking (or under for that matter).