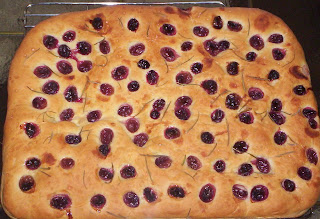 I found this recipe in the November issue of Gourmet magazine from 1994. I have copies going back to the early 1980’s and sometimes when I’m bored, I re-read them to see how our ideas about cooking have changed over the years. This particular focaccia reflects the beginnings of good bread coming back into fashion in the US-but not quite. It is still a very fast rising bread (5 teaspoons of yeast!) that does not really leave the dough much time to develop character. Of course, it could be argued that with a half pound of grapes and two tablespoons of fresh rosemary-character is the last thing it needs. It certainly makes a pleasant enough bread, and I certainly wouldn’t turn my nose up at it as a gift. The kitchen smelled wonderful as it baked away this morning. A word of caution-our bread flour today is much different than the bread flour in 1994 and depending upon your brand, you may need to adjust and use less. Add it slowly-a good rule of thumb anyway. I also found that mine was fully baked after 40 minutes, though the recipe calls for an hour-so keep an eye on the oven.

Preheat oven to 300 degrees F. In a large baking dish, spread the grapes in a single layer and cook in the middle shelf of the oven until soft and sticky (about 30 minutes). Cool slightly.

In a standing electric mixer, combine yeast, sugar and water and let stand 5 minutes until foamy (in other words, proof the yeast). Add flour, table salt, and oil and combine well. With a dough hook, knead two minutes or until soft and slightly sticky. Form dough into a ball and let rest on a floured surface covered with a bowl for 10 minutes.

On a lightly floured surface, roll out the dough into an 18x8 inch oval (I just rolled it out-I’m not that particular). Arrange on a greased baking sheet and sprinkle with rosemary, grapes and coarse salt. Let dough rise, covered lightly with plastic wrap in a warm place for about an hour or until almost doubled in bulk. Preheat oven to 375 degrees F. Bake in the centre rack of the oven for 1 hour (I’d start checking at 30 minutes) or until golden brown. Cool in the pan on a rack. Serve warm or at room temperature.