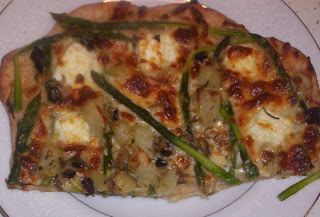 I suppose calling this a “pizza” is a bit of a stretch, but other descriptions are eluding me. I bought a large quantity of asparagus today, as I often do when the first Spring “grass” as we call it shows up. The Spring when I was expecting, I couldn’t get enough of asparagus sandwiches (on white bread with mayonnaise and vegetarian bacon strips-don’t laugh, it tastes great even if you’re not pregnant). The first weekend that the Farmer’s Market was open, I dragged my husband down to Lincoln, Nebraska to the very busy, crowded market to load up on asparagus. We arrived home noting that the sky was looking a bit odd. The weather radio went off, and the next thing we were in the storm cellar taking cover from a funnel cloud that had been spotted nearby. As I sat on the dirt/mud floor watching creepy beetles make their way through the puddles filling around me, all I could think of was that asparagus and how awful it would be if the house blew away taking all those fresh stalks with it. As quickly as it began, it was over and we brushed ourselves off, went upstairs and made dinner-as though the whole experience were the most ordinary thing in the world. Unfortunately, for the people in Hallam, they were less fortunate as the town was literally taken out that evening.

As I write this, I’m making a mental note to go check the batteries in the weather radio and open up the storm cellar for a good pre-season airing out. As I mention to just about everyone I know-a weather band radio with an alarm is an investment that is worth every cent. You simply cannot count on hearing the sirens, particularly if you live well outside of town as we do. I suppose I’ll forever associate asparagus with tornadoes and pregnancy, but that’s life in the country, I guess.

In a large bowl, combine water, yeast, salt and sugar. Stir to dissolve and let proof 15 minutes. Add the olive oil and wheat flour. Slowly add the bread flour until you have a dough that is smooth and elastic-you may need more or less so it pays to add slowly. Place in an oiled bowl and let rise 1 hour. Punch down and let rest half an hour before rolling out.

Sautee the potato in olive oil with the chopped rosemary until soft. Roll out dough and place on a baking sheet that has been lightly tossed with cornmeal to prevent sticking. Brush lightly with olive oil. Pre-heat the oven to 500 degrees F. with one rack in the lowest position and the other in the centre. Assemble the pizzas and place on the lowest shelf for 5 minutes. Reduce the heat to 450 degrees F and move to higher shelf. Bake another 5-7 minutes until done. This recipe will make two thin crusts or one thick. Thick crust will obviously take much longer, though if the toppings begin to burn, the heat can be further reduced to 400.