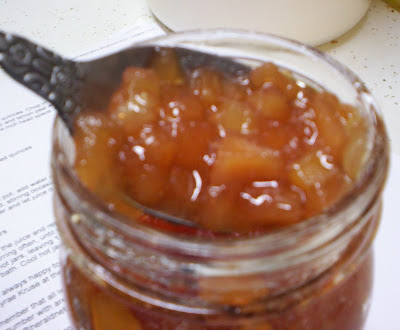 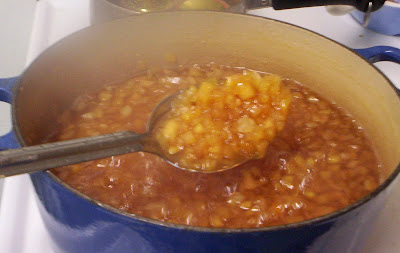 We had been living in our new home a couple years before my mother noticed the ornamental bush in the front yard was bearing fruit. It was one of those wonderful surprises in life, and she immediately made jelly from them. My memory of it is a bit vague as I can't recall the flavour being anything exceptional, but it was the most beautiful rosy jelly you could hope to set eyes on. I thought about making my quince into jelly as well, but I finally decided on the conserve as I figured it would be more versatile. Before quince season is out, I might make a block of paste as well. I know whatever I do, it will never be as magical as the jelly my mother made from the quince in our yard. It's funny how many fruits like persimmons are left to rot on the ground because people don't know they are edible. I have some persimmons ripening at the moment as well.

From the outset, I want to emphasize that this will take quite a bit of time. I clocked in at just under four hours. The worst of it by far was paring and chopping the quince, as they tend to be a bit hard. Because it does not use pectin, it takes quite a while to cook down. This wasn't a good project after being out all day and coming home to cook dinner. I'd recommend making this when you're still full of energy(which if you're me, is pretty much never).

The recipe may be found HERE, but it was pretty vague and I think a few things can be clarified for people that perhaps don't have the canning experience I do.

1). When you cook the quince, make sure it is as soft as you want it because once the sugar is added it will not become any softer.

2). Once you add the sugar, bring it to a rapid boil and cook the daylights out of it. In order to reach the gelling point, you really have to keep it at a hard boil.

4). The recipe says to cook until thick. I took it to the gelling point. There's always the chance it will be a bit overcooked and get hard, but that's easier to fix (by placing the jar in warm water before serving) than something that did not set.

5). The recipe did not indicate how much it would make! Don't you just love guesswork? I am came in just shy of five pints-the extra 3/4 pint being stored in the fridge to use immediately. You could use half pint jars as easily.

6). I adjusted the suggested processing time of fifteen minutes to twenty for the larger jars. I also let the jars cool in the canner for five minutes before removing.

7). The quince will do some odd colour changes. As you pare the fruit, it will turn a bit brown. This will go away as it cooks. Then, it will turn rosy as it gels, but not quite as deeply coloured as it would without the lemon juice and ginger pieces. What you get is an almost golden pink/brown that intensifies with cooking.

8) I wouldn't call this "jam" even though the recipe does. It really is more of a conserve.
Posted by Goody at 9:24 PM
Labels: Canning, Conserves, Marmalade and Jams, Preserving, Quince