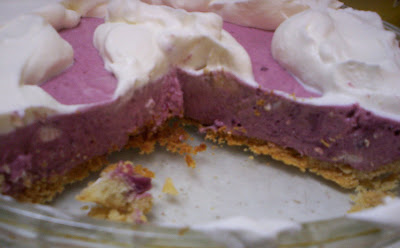 I finally made the fluffy grape pie from the concord grape concentrate I had in the freezer. Instructions for the pie and puree may be found in THIS earlier post.

Sometimes when you make something like the puree so far ahead, it is difficult to imagine finding a use for it down the road, but I knew we'd be having company in November and I'd want somethng special to serve.

We did our family Thanksgiving today so that people wouldn't have to travel over the busy holiday weekend. My sister-in-law leaves tomorrow and my husband's parents the day after. I'm a little tired, but it was great having everyone together and Danny had a blast with so many people paying attention to him.

The plum sauce I made last summer also made an appearance as a glaze for the roast duck. For some reason everyone wanted to open a jar of the Mandarin orange jelly so we had that with our Sally Lunn and cornbread (yes, I made both because my father-in-law is from the south and likes them).

Having shelves filled with glistening home-canned jellies, jams and pickled things also made a nice way to end the visit with everyone picking a few things to return home with. I'd hoped to have the Christmas cakes baked soon enough that they could take them as well, but I guess I'll ship them out next week.

The apple butter was eaten each morning for breakfast on some toasted Struan bread, and we had pickled beets and onions as well. The green beans I blanched and froze last summer steamed-up perfectly to serve alongside the duck, sweet and white potatoes and all the rest.

I also went ahead and made a batch of goat tamales and then wrapped them in parchment to freeze. This worked really well and they re-heated perfectly in the microwave. Had I known just how well they take to freezing I would have kept the freezer stocked routinely.
c
One last interesting thing-the chocolate wafer cookies made an excellent refrigerator cake coated in whipped cream. I had a bit of whipped cream left from making my sister-in-law her jell-o "crown jewels cake" (sometimes it's a fine line between horrified and impressed, but she did actually get a kick out of it) and I figured it was worth a try. Not only did it work, it was delicious, and cheaper than buying a package of those chocolate wafer cookies.

And because you have to serve two kinds of pie at Thanksgiving (you do, it's a rule) I made a shoo-fly pie as a nod to my mother-in-law's Pennsylvania heritage. You may prefer a shoo-fly cake.
Posted by Goody at 7:12 PM